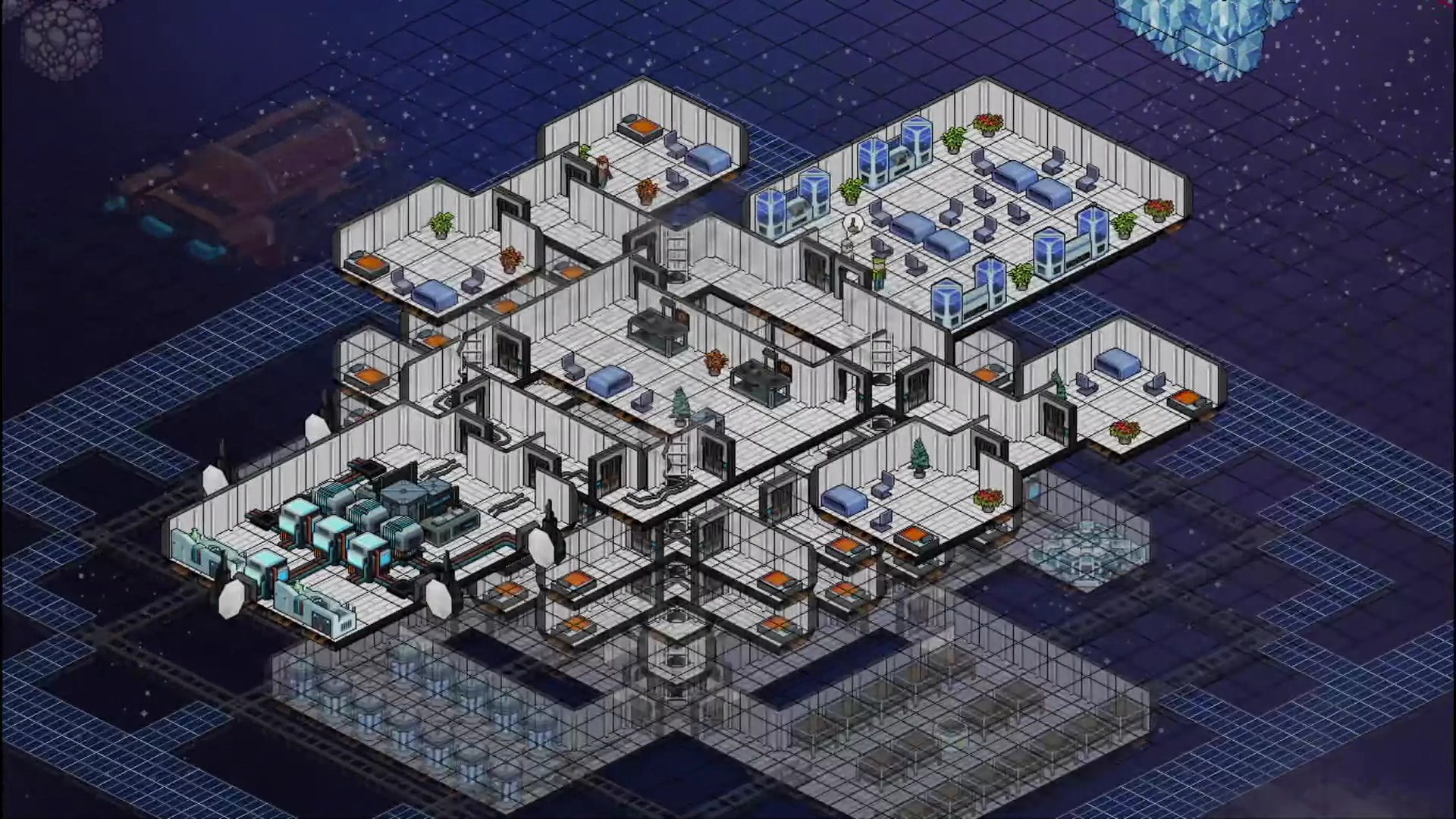 Meeple Station is a colony management game by Vox Games. It can seem pretty complex at first which is common in this genre, but after some practice and help from the game’s wiki, things can actually run pretty smoothly for a while. The interface is fairly clear and tips will help you get started. Meeple Station‘s main attraction is synchronizing the activities of your titular Meeples — keeping an eye on their hunger, oxygen, and other needs. When things are running, it’s not too different from watching an ant farm. With trading and pirates, however, the player needs to be proactive when it comes to long-term survival.

The game world is separated into a 3D grid made of cubes. Meeple Station provides a lot of tools for slicing and hiding certain objects, so seeing what you want to see is rarely an issue. Assigning tasks and keeping track of goals is also relatively straightforward. Early game consists of customizing the initial layout of your space station (or just selecting a preset, viable template) and then choosing a randomized area of space to settle in. The game opens up immediately, though certain practices are best observed, especially on subsequent playthroughs. Namely, setting up a food and oxygen pipeline to support new arrivals while gathering raw materials needed for advanced construction and research is a great approach.

Like many games of its genre, Meeple Station lures you into a false sense of security until a vital system suffers a malfunction, pirates come around when you’re not ready, or just when random squidgy aliens show up that you don’t realize are quite harmless. Thankfully there are a ton of helpful tooltips and visual filters to help you source the cause of trouble (or lack of trouble in the case of the squids). Being able to pause in moments of crisis is pretty helpful as is the ability to speed things up when mundane activity is going to take up a lot of in-game time.

Meeple Station can be a very relaxed game if linear problem solving is your flavor. The developers are constantly working on the game, with online co-op being an exciting future update. Being able to set up multiple colonies, a supply chain, and a veritable empire are all promising features, enabling one to set up a virtual “Rube Goldberg Machine”. Although lacking the depth of unit management like with other colony sims, Meeple Station offers surprising complexity in base construction. With continued support on the way and lot to offer right now, this game is a promising new entry to the genre.

Graphics: Very simple, but charming in their own way. With a lot of action happening on screen, they do their job of conveying information pretty well.

Gameplay: Quick to get into, and almost addicting afterword.

Replay Value: When a colony fails to sustain itself, it can be relieving to start again with new skills, just to see if you can get a little farther.

Progression: Your colonies will start out pretty basic, but as your knowledge of the game grows, so too will the complexity of your designs.

Final Rating: 7/10. Meeple Station is a great example of independent developers shining to create a complex game with humble resources. Although lacking in presentation, the mechanics and clearly-defined player goals can keep you enticed for multiple playthroughs.

For a game with cartoonish visuals, Meeple Station is a surprisingly deep strategy title.

DOOM is truly unique from other first-person shooters due to its ultra fast-paced gameplay and loads of extreme gore. Unlike the formulaic first-person shooters of the world, DOOM puts a absolutely ruthless, yet comedic mercenary through the gates of hell, not once, not twice, but three times. Bringing forth a demonic horror aspect piles even...