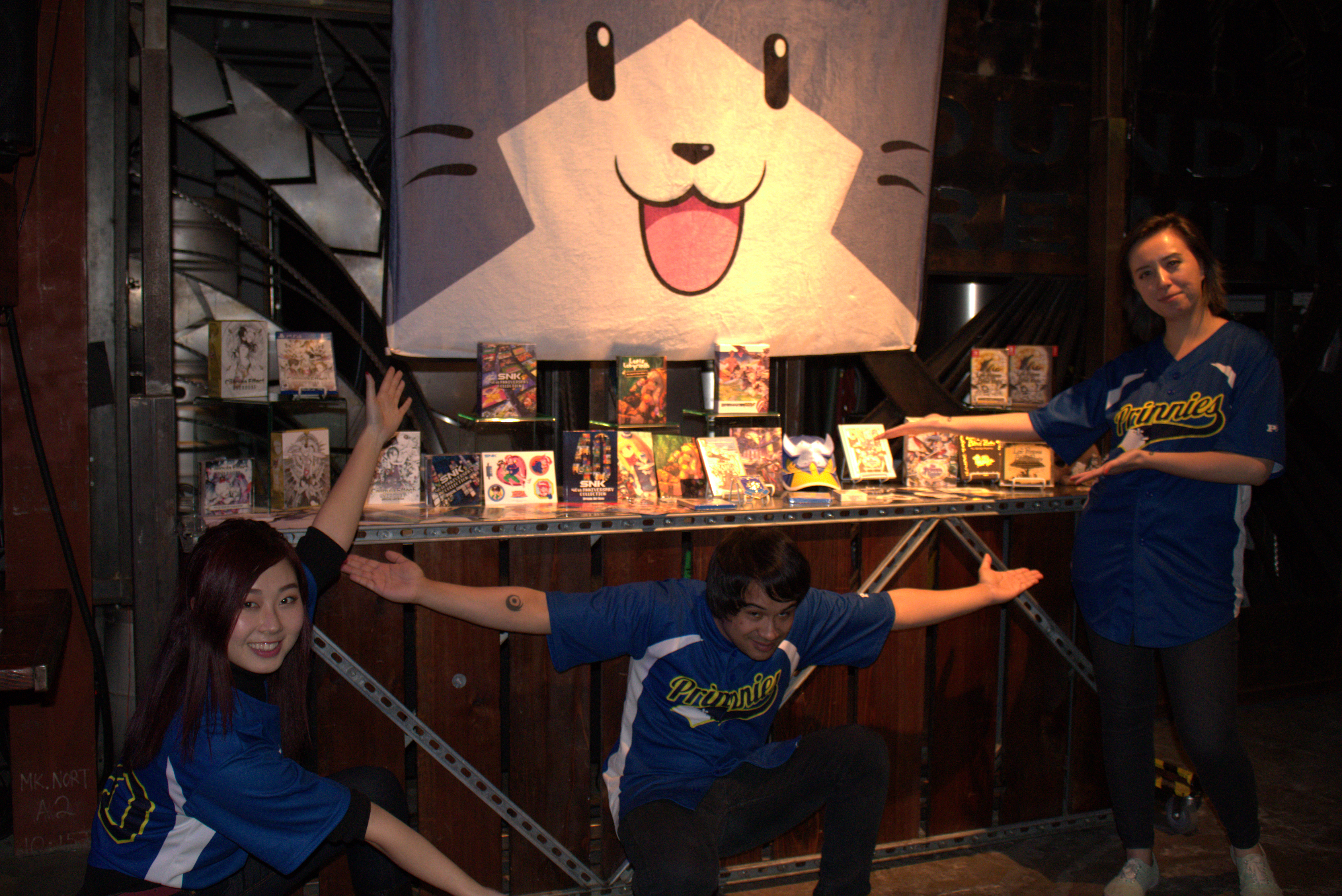 Thanks to these three from NIS America for agreeing to pose for a picture! All featured photographs in this article are taken by Avian Michel.

NIS America, a publishing company known for localizing popular Japanese titles such as the Danganronpa series and parts of the Persona series, hosted a livestream on March 11th that detailed their upcoming releases for 2019. The stream can be found on their YouTube channel, but Launch Party Gaming was able to get an exclusive sneak peek before it aired in a press event that took place on March 8th in San Francisco. I was able to attend this event, and it held a lot of new experiences and surprises for me.

NIS America’s 2019 press event took place in the Folsom Street Foundry, a spacious event venue styled as an open warehouse. The Foundry features a gallery wall for art displays, four screen projectors, and a bar. A large plush figure of the company’s mascot, easily several feet tall, greeted guests in the entry room. Nippon Ichi Software’s mascot is a “Prinny”, a fictional creature originally from their Disgaea series. This carries over to NIS America as well. Inside the Foundry’s “great room”, various TVs were set up around the perimeter, all featuring different games to play before official market release. A table on the side featured merchandise for these new releases and past releases, and included things like artbooks, figurines, physical soundtracks, and other collectibles.

For the first hour, I amused myself by playing Neo Atlas: 1469, an upcoming game for the Nintendo Switch developed by ARTDINK. Its release date is scheduled for April 9th in the US and April 12th in Europe, so I was able to play a portion of this game a month in advance. Neo Atlas: 1469 sets the player as a Portuguese explorer in a time when the world was still considered flat. Players set sail across the ocean, but there are twists to the game – such as the mythical sea monsters that lie in wait! Straying more from reality, land masses outside of the known world of Europe and the Middle East are randomly generated per game. You hold the power to report or omit any areas that will be mapped, choosing what the world should look like. Back in the Old World, trade routes between countries can be established as players discover more trade goods produced by various societies. There is a narrative underlying the freeform exploration, and it is presented in a self-described “visual novel” style. A quirky man named Miguel acts as the player’s companion throughout the game, and player choices can convince or deter other characters throughout the story to join and form an exploration crew.

Other games were featured around the venue, but my and everyone else’s attention was diverted when the NISA 2019 livestream preview was played. Content was not greatly tailored to the event, and the hour-long video seemed to be almost verbatim to the actual public stream. However, it was interesting to see all the games that NIS America has in store. Games to look forward to include RPG Maker MV, Neo Atlas: 1469, The Princess Guide, The Caligula Effect: Overdose, Lapis x Labyrinth, and SNK 40th Anniversary Collection.

Another game I spent a significant time playing during the event was The Caligula Effect: Overdose. Released on March 12, The Caligula Effect: Overdose is a Nintendo Switch remake of its predecessor The Caligula Effect. Both games use a combination of third-person exploration, text narratives, and turn-based combat to tell the story of a group called the Go-Home Club in high school. The Go-Home Club, unlike their classmates, is aware that the entire school is living in a computer simulation called Mobius meant to placate them indefinitely. The protagonist and their club members are on a mission to defeat corrupted students and escape from Mobius. I will actually be reviewing this game more thoroughly later, and am excited about its plot, but personally not a fan of the turn-based combat.

I sampled The Princess Guide and RPG Maker MV as well, but did not spend as much time with either. The Princess Guide is a flashy, top-down dungeon RPG that relies on button mashing for combat, and was previously mentioned on Launch Party Gaming in an article by Magnus. Certainly, the characters are lovable, but the gameplay mechanics are not that satisfying. RPG Maker MV is a software program that can be used by anyone, regardless of programming experience, to create a pixel RPG-type game. Well-known pixel JRPGs such as Yume Nikki, The Witch’s House, and Ib have been created using older versions of RPG Maker. Both The Princess Guide and RPG Maker MV are American re-releases for the Nintendo Switch.

Overall, attending NIS America Press Event 2019 was an enjoyable experience for me. I received many parting gifts including copies of two upcoming games, a mini artbook, and a personal caricature of my face. I don’t usually report news, but I was incredibly grateful for the chance to visit San Francisco for this event. I hope to be expanding my writing further in the future! And if nothing else, NIS America definitely knows who Launch Party Gaming is now.

Six Videos to Help You Succeed in Overwatch

Overwatch is getting big. Blizzard has laid down a foundation, connected with their community, and evolved with the game and its players. People are loving Overwatch, and it’s never hard to find someone to play with. It is, however, sometimes difficult to rank up. Competitive matches are unforgiving, and quick play is a grab bag of...