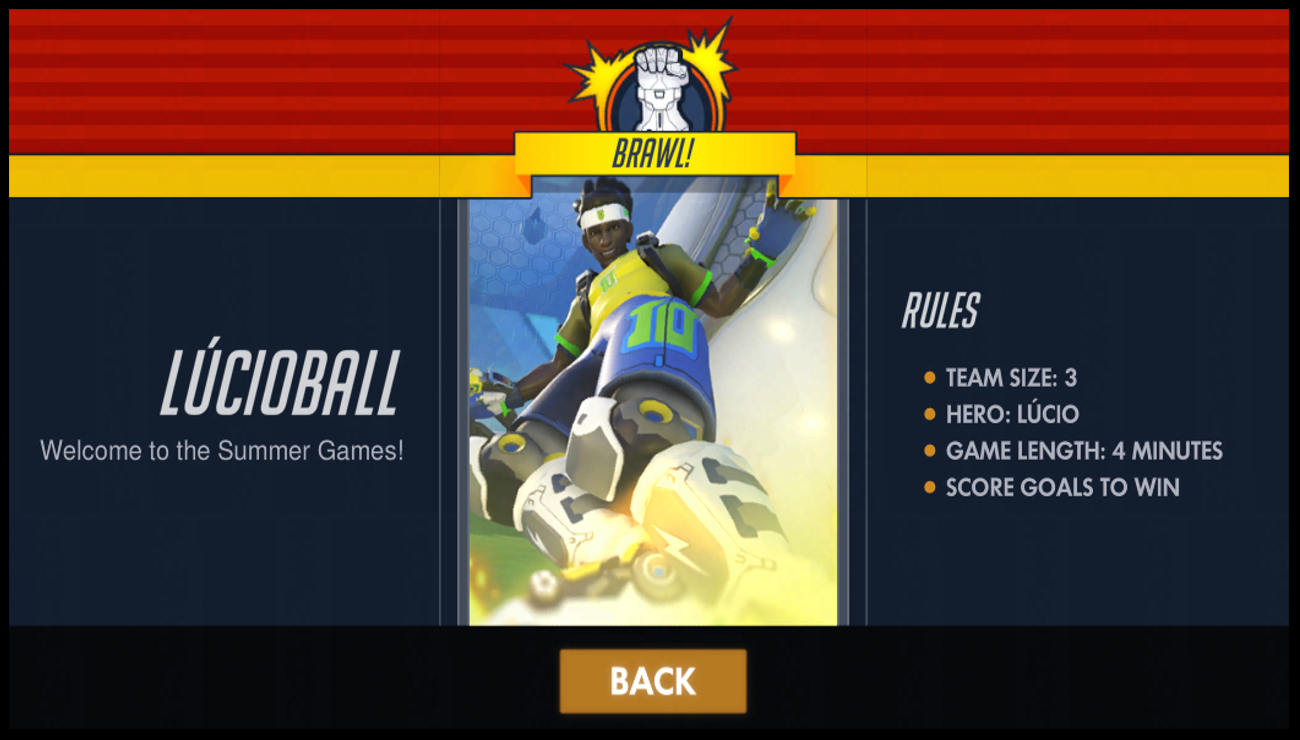 Ladies and Gentlemen, Boys and Girls, Welcome to The 2016 Overwatch Summer Games! In light of the Olympics, Overwatch is presenting us with new hero skins, emotes, and a Weekly Brawl called “Lucioball”. To give a brief summary of the brawl, it’s essentially Rocket League with Lucio instead of a car. You play in an arena map with two other teammates, facing off in a game of amped up soccer. Using slightly altered abilities, you must attempt to score goals and defend your net in order to win. Clear your calendars, because this game mode will have you playing for hours.

The objective of this game mode is not to kill your opponents, but to hit an over-sized soccer ball into the opponent’s net. Lucioball’s aim is to be like soccer, and it successfully plays like the popular sport. The brawl actually felt like a totally different game, only to be brought back into the Overwatch reality by our Brazilian hero, Lucio. My favorite part of this brawl is that visible teamwork is common. Typically one person will be goalie, and the others will attempt to score. Sometimes a team is so coordinated that there are passes and synergy plays. If you have two other friends who play Overwatch, try grouping up to play “Lucioball”. It’s fun solo, but significantly better with a team. It’s always cool to see something new being brought to Overwatch besides traditional shoot and kill gameplay.

Since shooting isn’t present, Lucio’s usual abilities are useless here. Blizzard thought of this, and actually changed some of his skills. His left click punches, his cross-fade is permanently speed boosted, and his ultimate brings the ball towards you. Lucio’s wall ride and movement speed still remain, coming together to create one heck of a soccer player. Even though his abilities are altered, it still felt like Lucio didn’t take much time to get used to. To add to the fun, there are also jump pads located around the map, meaning you can perform some high flying aerial plays like in Rocket League. It’s such a great feeling to get the perfect timing and score a beautiful goal. Matches just felt so smooth and natural to play, despite being vastly different from normal Overwatch.

This is the first brawl that I am actually excited to come back to every day, even over regular play. It’s nothing like standard Overwatch, but I am still drawn to it every time I launch the game. I’ve actually never played Rocket League, but from this brawl I can see I’ve been missing out on hours of rocket-powered fun.

“Lucioball” receives my first 5 out of 5 rating. It is super fun, intense, and surprisingly creative and fresh. Sure, the concept is pretty much a copy of Rocket League, but remember this is Overwatch. Even better yet, this brawl will last for several weeks — until August 22 to be exact. This is Overwatch’s first seasonal event, and with the brawl alone, I am extremely impressed. Let’s hope we will see more great brawls like this in the future.

Ready your wallets — the annual Steam Summer Sale has begun! This year’s theme is Grand Prix and the sale will run from June 25th to July 9th. As tradition, early shoppers were greeted with plenty of errors, extremely slow checkout, and quite possibly a black screen (maybe a white line if you were lucky)....