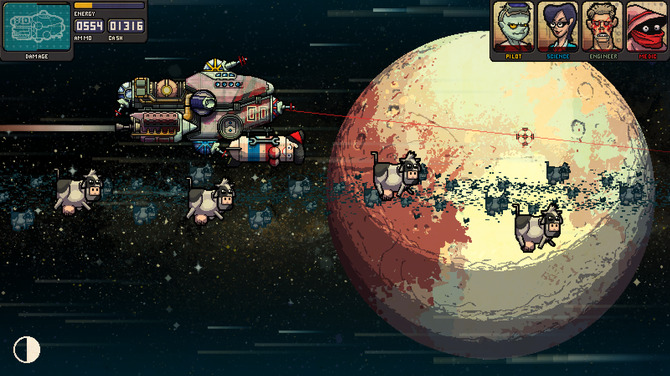 Turbo Pelvis 3000 has announced Fission Superstar X, a spaceship rogue-lite in which players go on a military journey through the solar system in order to deliver a nuclear bomb, created by mad scientist Dr. Leopold, to Earth. The release date is set to January 31st, 2019 and the game will cost $14.99 USD.

Fission Superstar X includes over 20 different environments and over 70 different types of enemies including fascist space cats, giant insects, and eight bosses. Combat involves using ranged and up-close weaponry, while dodging and blocking attacks with a shield. During the game, the player is allowed to choose the best course of action: whether to develop the crew, repair or upgrade the ship, participate in a battle, or skip combat entirely. Choosing might become difficult because the game offers nine unlockable ships, more than a hundred crew members of different races from humans to space bears, and 64 different kinds of weapons.

A new, fast-paced, action-RPG called The Princess Guide will launch for both the PlayStation 4 and Nintendo Switch in late March this year. The game takes place in a land of war, where “a new kind of enemy force arises to make things more difficult”. The player, who takes the role of a military instructor...