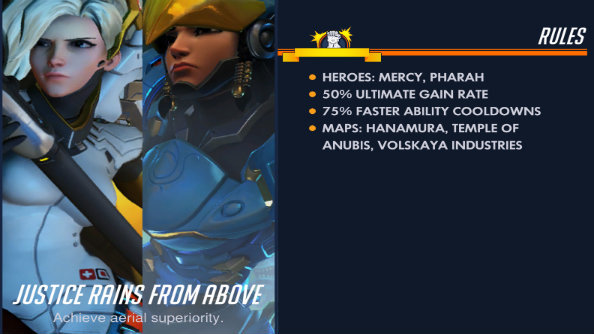 Overwatch’s weekly brawl for the week of 6/28/16 is called “Justice Rains from Above”, a game mode centered around dominating the skies. The two heroes of choice are the masters of the sky — Pharah and Mercy. To ensure that you have plenty of room to fly around in the clouds, the map pool contains the very open Hanamura, Temple of Anubis, and Volskaya Industries. Finally, to make things even more interesting, ability cool downs are 75% faster and ultimate gain rates are increased by 50%. All of these in tandem create a very chaotic, and surprisingly fun game mode.

This mode is like a combination of Quake, TF2, and War Thunder. It’s fast paced, explosive, and involves a lot of flying. Pharah’s rockets and both her and Mercy’s extensive flying abilities fuel the the chaos even more. In normal gameplay, these heroes are limited to their air time. With the faster cool downs in this brawl, you can, and must be in the sky as much as possible, or else you’re an easy target on the ground. In the air, you’re a very hard target to hit, not only because you are flying all over the place, but also since Pharah’s rockets have travel time, meaning you have to anticipate where your target will be. This is where I am glad they increased the ultimate gain rate, because there are rarely any more than two kills in any given 15 second period of time. With the increase, ultimate times are similar to normal gameplay and are just as satisfying.

The fact that there’s so much chaos and so little kills means that the gameplay doesn’t flow that well. Capturing an objective with the assault game mode is nearly impossible. With everyone flying above the objective and typically not more than three enemies being dead at a time, it’s very hard to cap points, as they are contested very often. It is more of a test of which team’s wrists will give out after spending ten minutes swinging their mice all across their mouse pads. It was very hard to win as the attackers, but I am willing to overlook that because of how much I enjoyed “Justice Rains from Above”.

This brawl is very interesting, and didn’t really feel like Overwatch at all. It’s a big rocket-fest of players hoping to hit a lucky shot, which I found very entertaining.

If I had to give this brawl a rating, I would give it a 4 out of 5. It was very fun, had an interesting concept, and really only lacked in its unbalanced gameplay. I think a team deathmatch game mode would have fit this brawl a lot better. Despite that, it was a lot of fun and is definitely worth a try.

For the week of 7/12/16, Overwatch’s weekly brawl is called “Mobawatch”, a game mode designed to be like modern-day MOBA titles. Each team is fully comprised of unique heroes, and once you have locked in your character, you cannot switch heroes for the entire match. This brawl tries to amplify the MOBA aspect of Overwatch, and successfully...