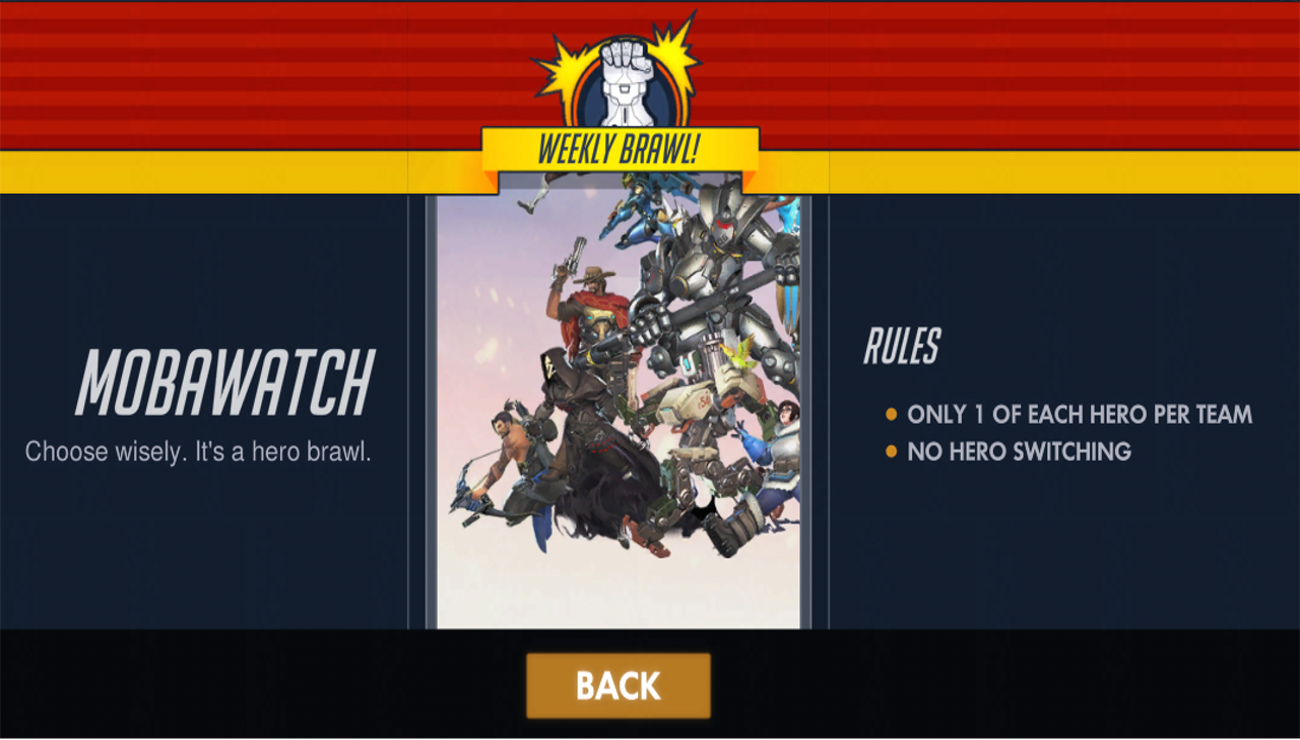 For the week of 7/12/16, Overwatch’s weekly brawl is called “Mobawatch”, a game mode designed to be like modern-day MOBA titles. Each team is fully comprised of unique heroes, and once you have locked in your character, you cannot switch heroes for the entire match. This brawl tries to amplify the MOBA aspect of Overwatch, and successfully does so. However, it doesn’t really feel like a MOBA, but just like normal gameplay.

What makes standard MOBA games like Dota 2 and League of Legends so interesting and challenging is that throughout the game you must level up your character, which causes you to get more powerful as the game progresses. The early, mid, and late game components are all equally important — if you don’t keep up you will get destroyed by the more powerful characters near the end of the match. Overwatch does not have an upgrading and leveling component, which means it will never truly feel like a MOBA. This brawl is about the closest we can get.

The gameplay resembles my central point. Occasionally you may see double-hero combos, but in casual play most of the time you will not. Also, I don’t usually switch heroes unless it’s situational. For example, Symettra and Torbjorn are better on some objectives on certain maps than others. Typically after the enemy team caps a point, they would switch over to a better suited hero. You can’t do that in “Mobawatch”, and from what I’ve noticed it has minimal impact on gameplay. It’s a tavern brawl, so few people are trying their absolute best to win. Disabling hero switching seemed to be a minor tweak in this case.

Besides looking for something creative and fun, I expect each week’s weekly brawl to feel different from normal gameplay. For this week, I have to say that “Mobawatch” really didn’t feel different, and I was pretty disappointed by it as a whole. I appreciate Blizzard’s attempt here, but I don’t think it worked well. The brawl felt like a skewed version of what competitive play is soon to be in a future update (1 hero limit per team).

My rating for “Mobawatch” is a 2 out of 5. The gameplay didn’t bring anything more exciting or interesting from normal gameplay. To me it was more of a standard game mode than a brawl.

Niantic is hosting an Earth Day cleanup for the second year running. During last year’s Earth Day, Niantic convinced thousands of people to help clean up their communities. They are hoping to grow that number this year by providing incentives to players who attend events that will be held around the world with the help...