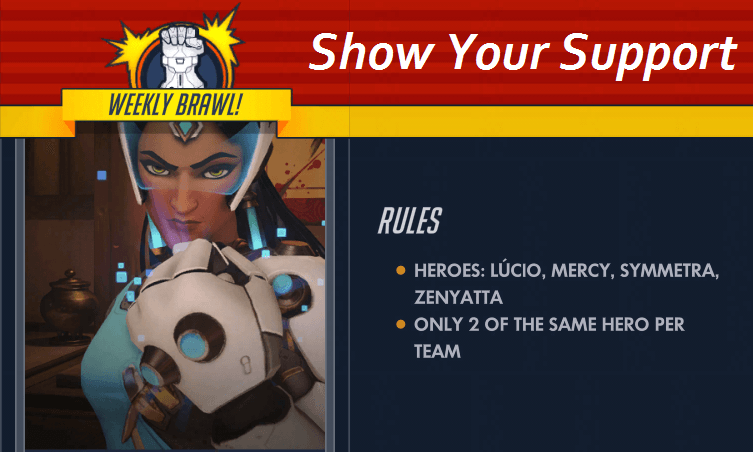 The Overwatch Weekly Brawl for this week of 7/5/16 is titled “Show Your Support”, a game mode all about support heroes. The idea is very similar to “Overly Defensive”, except that the heroes of choice are strictly support heroes Symmetra, Lucio, Mercy, and Zenyatta. To add to the “fun”, a single team may only have 2 of the same hero. So what happens when you take the weakest, lowest damage dealing heroes and put them against each other? Well, a lot of supporting.

From my experience, the support heroes each have their optimal roles for different game modes and maps. Lucio is great for attacking and rushing objectives, while Symmetra is the queen of defense, stopping enemies in their tracks with her turrets. Mercy and Zenyatta are more all-around effective no matter the game mode. That being said, I feel that the defensive side, or in the case of control maps, the side that is first to control the point, is favored. The key factor in this is Symmetra. Once she manages to get all her turrets down, the map is pretty much on lockdown, especially since the low health heroes can’t survive long enough to destroy them all in one go. The lockdown is even tighter if a team has two of her. In general, if your team has a decent Symmetra or two, you have a very good chance of winning. In normal play she isn’t always seen as a very powerful hero, but this brawl really shows her potential. Even as an offensive hero, Symmetra would sometimes show up. In my experience, if you want to win in this brawl, play Symmetra.

In terms of balance for this brawl, I think it is a lot better than “Overly Defensive”, and it was never really clear-cut who would win. Like I said, Symmetra is key, and it’s really a matter of the first few seconds of the game to determine who will reach the point first or if the defense is strong enough. Lucio and Mercy helped a lot in this regard too, as their ultimates can make or break a game. Overall, it seemed fair no matter the side.

I’m having fun playing this brawl, especially since I already like playing support heroes. Interestingly, I found that in this game mode you have to change your play style from normal supporting roles. This is a great challenge, and a more balanced change of pace.

My rating for the weekly brawl “Show Your Support” is a 3 out of 5. Despite not being creative and the gameplay sometimes not being as intense as normal, it was interesting to use support heroes in roles they really weren’t created for. These factors combined create a game mode that’s somewhat different and a fresh new experience.