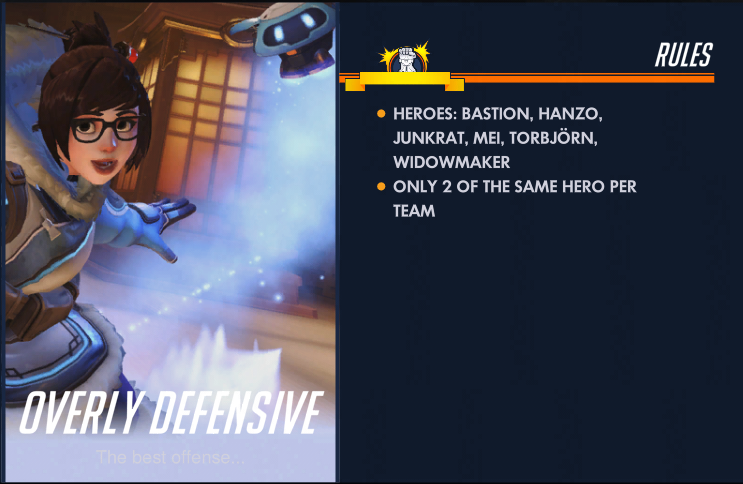 This week’s weekly brawl for Overwatch is titled “Overly Defensive”, where players can select only from the defensive heroes — Bastion, Torbjorn, Hanzo, Widowmaker, Mei, and Junkrat. You are also restricted to only two of the same hero per team, so no Mei freezing frenzies. So, is it fun? Here are my thoughts.

Overall, my feelings for this week’s brawl were variable, heavily depending on the side I was assigned and the game mode I was playing. I very often was assault, where one team (attacking) is suppose to capture the objectives, while the other team (defending) is suppose to defend those objectives from being captured. You can probably already see a problem, as the brawl is called “Overly Defensive”. If I was placed on the attacking team I kind of threw in the towel from the start, as attacking proved difficult with heroes like Torbjorn, Bastion, and Widowmaker, where your main abilities are stationary. Many of the games I played attacking only lasted the minimum five minutes, with our team barely touching the objective. It was kind of boring and unsatisfying, feeling like our team barely did a thing. There were times where I would get a couple Hanzo ults, but that’s about it. However, there were the rare occasions when we would actually win while attacking. It seemed like a combination of luck and great teammates, and I was honestly left more stunned then excited after winning. Still, a win is a win.

Then, there were the times I was put on the defensive side, and I was very confident that we would win. Almost all of the games I played as defensive we won with ease, even getting a few nice plays in. Still, that’s supposed to happen when the odds are heavily in your favor, so it ended up not feeling that great. Since I didn’t even feel that happy after winning, the rare defensive losses were even worse. Again I was shocked and confused, and it felt kind of devastating in a way, knowing we had so many advantages and we still lost. Now I hope I’m not sounding overly dramatic about the game, but when playing a competitive game like this, I want to be left wanting more of that joy of winning or that “So close!” feeling after a neck and neck loss. I cannot say that I experienced these feelings while playing this brawl, which disappoints me.

I had a few moments where I enjoyed playing the brawl, but only a few. If I was on the defensive, I typically enjoyed it, although not tremendously. On the offensive however, I was not satisfied. If I were to redesign this brawl myself, I would have made the attacking team be defensive heroes, and the defending team be offensive heroes. In theory this should balance everything out a little, and I think it makes sense.

If I had to give “Overly Defensive” a rating, I would give it a 2 out of 5. It was unbalanced, not very creative, and I didn’t get much satisfaction out of it. It was a nice change of pace compared to quick play, but not good enough for me.

Ladies and Gentlemen, Boys and Girls, Welcome to The 2016 Overwatch Summer Games! In light of the Olympics, Overwatch is presenting us with new hero skins, emotes, and a Weekly Brawl called “Lucioball”. To give a brief summary of the brawl, it’s essentially Rocket League with Lucio instead of a car. You play in an...

Rainbow Six Siege veterans can expect to see a massive surge in new players over the weekend, as the game goes free-to-play on all platforms from 8/16 to 8/20. This free version will have absolutely no limitations compared to the full version, meaning all maps, modes, and operators will be unlocked. With the complete Rainbow...