A Retro Arcade Throwback with Style 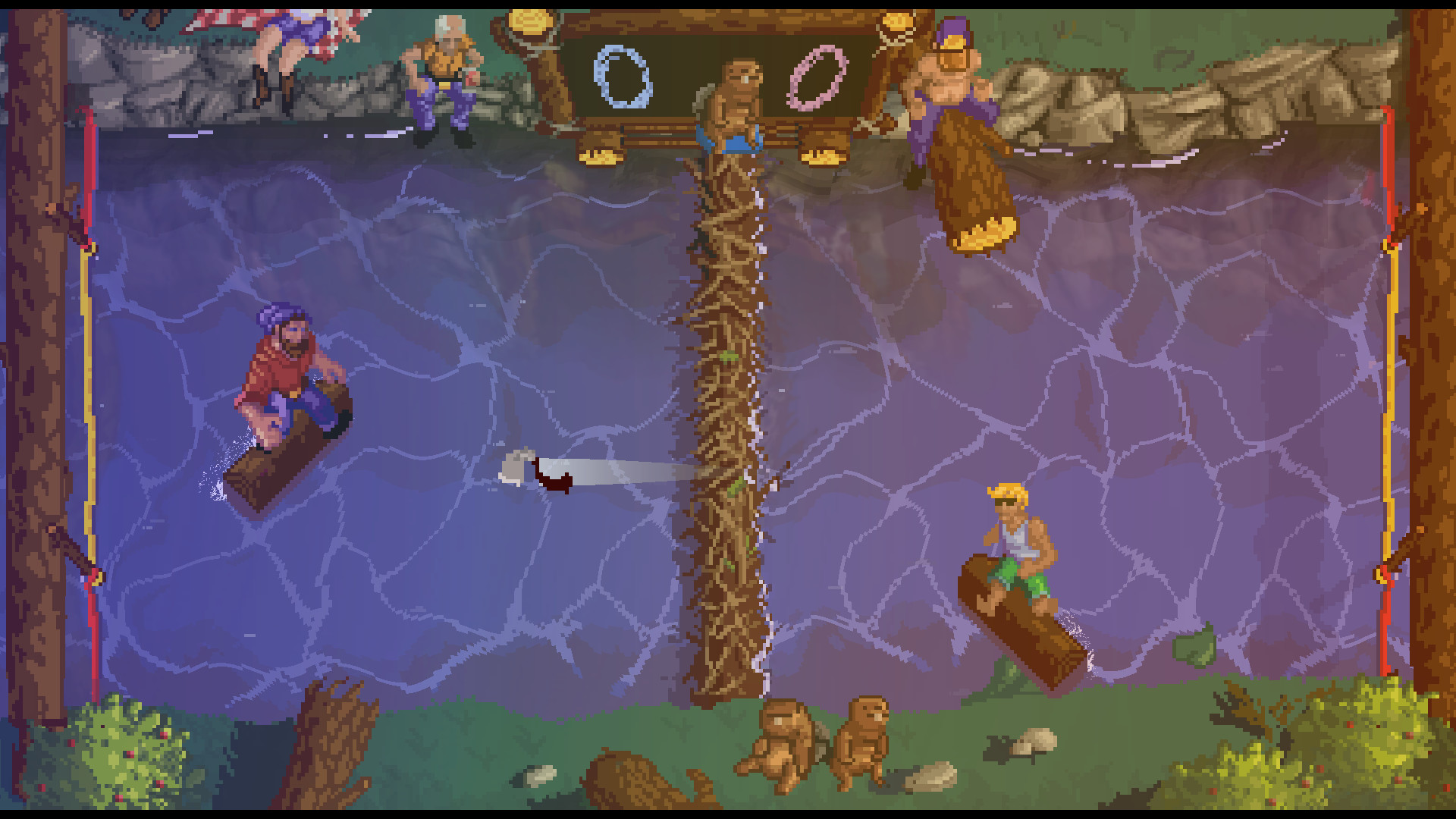 Log Jammers is an upcoming indie game by developer Mega Cat Studios. It is currently in beta, with a release date of February 2019. Mega Cat calls Log Jammers “an energetic competitive arcade sports game featuring axe-throwing, blade-catching action”. It’s a throwback to arcade games in the style of Pong and more notably, Windjammers. Mega Cat seems to have attempted to make a sort of spiritual successor to Windjammers, and they have definitely succeeded. Log Jammers will feel like a pure nostalgia trip to anybody who played and loved the original Windjammers.

Log Jammers consists of two players in a pong-like arena, trying to score goals on each other. Goals are scored by throwing an axe into the other’s goal zone. The controls are simple and easy to adjust to: a basic three-button arcade setup with a movement stick or arrow keys. Games are played best of three and each round the player to reach 11 points first wins. There is a tournament mode, as well as online multiplayer. However, due to the small playerbase at the moment, I was unable to match with anyone online. After release, that will hopefully change.

My experience with Log Jammers was fun and frustrating. The gameplay is fast-paced, exciting, and easy to get hooked on, but as of right now there is no real tutorial or instruction manual. The game itself is simple and easy to pick up, but some things aren’t immediately obvious. My first round, I didn’t know what any of the power-ups did, and did not know how to use my special ability. I’m still not sure what the deciding factor between a two and five point goal is, or what the cheerleaders in cheerleader mode are for. For someone unaware of previous games like Windjammers, getting started can be a confusing experience. I hope the final release will include a reference resource for new players, as well as the ability to rebind keys. Given their devotion to making games accessible to all, I have faith the developers will provide.

Sharp as an axe

Log Jammers is definitely old-school difficult. Your AI opponents move fast and their axe swings faster. Combine that with the fact that there aren’t a lot of modern games in the style of Windjammers, and you’ve got yourself a challenge. With that in mind, the game is absolutely captivating. Pulling off a ricochet goal feels great. Stopping a ricochet goal feels better. The simple gameplay and quick matches will keep you glued to your keyboard or controller for hours.

If there’s one thing this author missed in Log Jammers, it was the multiplayer. As mentioned earlier, the online multiplayer is currently lacking a playerbase. More importantly, there was a distinct lack of local multiplayer options. This game is practically begging for couch co-op. Very few things feel better than beating your buddy at a tough game, even more so when they’re right there to rub it in.

Mega Cat Studios is a relatively small developer with a handful of games under their belt already. Their focus is mainly on retro/arcade games, and their dedication to quality is truly something to be proud of in a time of quickly-assembled, low-quality app store fodder. They have made it their goal to make games accessible and modern, avoiding stereotypes and discriminations that are a relic of gaming’s past. Their most impressive work may be their dedication to the spirit of retro gaming. Many of their games are available as physical cartridges for a variety of retro consoles. They have full blown, playable releases for the NES, SNES, and Sega Genesis!

Log Jammers is a quality retro game and a beautiful spiritual successor to Windjammers. It has a playable demo out now, and I encourage anyone with a love for the retro/arcade genre to give it a try. I look forward to its full release in February, and readers can look forward to an updated review at that time. Mega Cat Studios has made a masterpiece that would compliment anybody’s Steam Library or physical NES collection. Log Jammers would even be a perfect candidate for its own custom arcade cabinet.

Graphics: Log Jammers is a retro game, and so it is not intended to be realistically beautiful. But, judging it for what it is, the game is beautiful. A neon color palette makes the characters pop and the contrast makes everything easy to visually process. I never had trouble seeing what was going on. It is a beautiful arcade game.

Gameplay: Fast-paced, enticing, and frustrating. Log Jammers keeps you on your toes, for sure. Lack of a tutorial or explanation makes the first few rounds a bit confusing. This is something I expect the developer to remedy in the full release.

Multiplayer: Currently nonexistent. The functionality is there, but the playerbase simply is not yet. This is normal for a beta, and I hope to review the multiplayer after full release.

Controls: Controls felt tight and responsive, but were not customizable. Again, this is something I fully expect the developer to fix at release.

Final Rating: 8/10. Log Jammers is a ton of fun in a little package. Keep an eye out for it's full release in February 2019.

Log Jammers is a quality retro game and a beautiful spiritual successor to Windjammers.