This Halloween, think twice about visiting your neighbor… 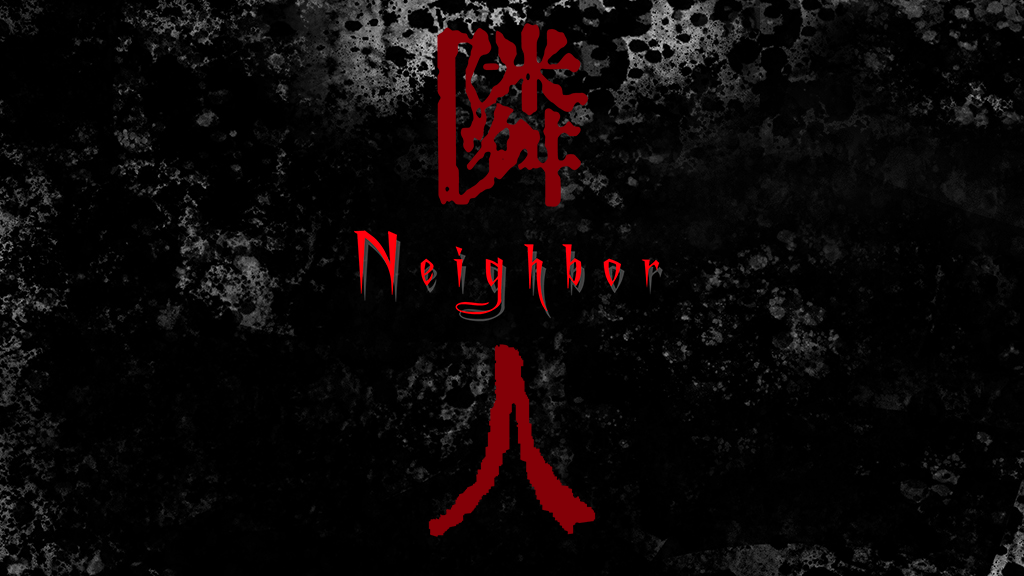 Neighbor is a Japanese horror visual novel released by Otusun Land. Fitting to its horror genre, the game has a cryptic background. It was originally created and distributed by the Japanese company Rosalia in 2009 as a freeware game, but Rosalia eventually closed down and the game died, becoming unobtainable for years. Otusun Land, an up-and-coming localization and development team, created a Kickstarter in late 2017 and successfully funded a full translation and remake of the game. Neighbor’s remake adds a full English translation, complete Japanese voice acting, new CGs, and a new epilogue. It was released on September 29th, 2018, and is available for PC, iOS, and Android.

Visual novels are an odd medium because they don’t fit strictly into the video game genre. While famous games like the Ace Attorney series and the Danganronpa series (both also two of my favorites) are visual novels, the majority of the genre tends to be full of indie publications that read more like traditional stories. They’re certainly less interactive than the typical FPS or RPG game, but feature more content than a standard book (whether published in print or digitally). It’s an acquired taste, but one that I’ve developed, so I was extremely excited to review Neighbor. A feature worth noting is that Neighbor is kinetic, which means that there is only one possible ending to the story. Other visual novels feature multiple endings that depend on possible choices the player makes throughout the story, but there are no choice options in Neighbor’s gameplay. It’s more of a story experience rather than a strategic game, but nevertheless it’s extremely satisfying.

Neighbor tells the horror story of a woman named Yuuki Kae who moves into a new apartment complex in Japan. Kae’s new neighbors act frightened when Kae introduces herself, and none of them particularly trust her. Eerily, when Kae tries to greet the apartment directly next door, she finds a rattling, locked door which opens for a pale hand reaching out to grab her. Kae is terrified, and yet the other neighbors and her landlord insist no one lives in apartment 202. By her first night, Kae begins to hear banging on the walls that shake her entire room. One neighbor, Hisamatsu Daigo, confides in Kae about strange occurrences that have happened to residents in the surrounding apartments: banging noises on walls, handprints on windows, humanlike silhouettes pressing into the wallpaper… Paranormal activities plague Kae’s life in the apartment, each scarier than the last. Together, Kae and Daigo race to unravel the mystery of what could be a haunted apartment.

Kae’s first paranormal experience, with the rattling door and the outstretched hand, is actually not scary. I feel that a person grasping their hand outside their door could be a strange, but plausible action. The rattling of the door is more off-putting and a bit scary, but not incredibly so. The true horror of Neighbor develops over the course of the story. Handprints that begin to cover the window imply someone trying to come inside Kae’s apartment. Unexplained sounds of walls being hit and sloshing footsteps haunt the rooms. Kae begins seeing apparitions of people. While the beginning events of the story are questionable, later events are definitely scary and justify Kae’s fear.

Minor Spoilers Ahead: The story was eerie, and I really enjoyed reading Neighbor. It’s not extremely scary, though, so some players may be disappointed. There are no jumpscares (thankfully for me). Horror focuses mainly on the paranormal and features mature themes. There are depictions of abuse, rape, murder, and suicide. One scene in particular depicts and describes the body of a suicide victim in gory details, so I advise caution to suicidal or squeamish players. However, despite the dark themes present in Neighbor, the story actually ends in a completely happy ending. Not a vague hopeful ending – a completely resolved, feel-good happy ending. It’s actually rather heartwarming. Otusun Land added their own epilogue after the original ending, so the epilogue provides further resolution. No More Spoilers!

While Neighbor‘s story was solid, gameplay was not as polished. Since visual novels are meant to tell a story, any extra gameplay mechanics should aid the story rather than detract from it. Thus, extreme care should be taken when deciding to implement features. There is a single gameplay feature in Neighbor, called tips. Certain text in Neighbor is highlighted in red, which indicates a clue, or tip, that is crucial to solving the mystery. Clicking on tips pulls up newspaper article clippings, but these clippings cannot be saved and viewed later in-game. There is no other gameplay feature that utilizes tips, either, which makes the action of clicking on tips pointless besides world-building. Tips are also scarce, with there being only about four in the entire game, which consists of 30-something chapters. While 30 chapters may seem daunting, the chapters are actually very short and correlate to almost every scene change. My readthrough took 1 hour and 40 minutes: the story is long enough to satisfy, but not long enough to become tedious. Complaints about the chapters, though, are that chapter transitions are almost unnoticeable. New chapters are indicated by text in the bottom left corner, but this text is so small that I would miss certain chapter titles. I would notice text for chapter 14, for example, and then not see another chapter indication until chapter 17. Even now, I’m still not completely convinced that it was a missight on my part. Perhaps the text really is missing.

One final thing to note about Neighbor is the game atmosphere that Otusun Land created. Otusun Land’s team added new CGs to the original game, along with full voice acting in Japanese and a new soundtrack. (There is also a new epilogue, written in part by Otusun Land team member and former member of Rosalia, Ayane.) The CGs, music, and voice acting add immersive detail to the game. Interestingly enough, Neighbor does not feature sprites or text boxes, choosing instead to overlay text over CGs. All backgrounds take on a monochrome scheme and the entire game is painted in shades of purple. When detailed CGs do appear, they accentuate scenes well and have an attractive art style. The sound is designed well, too. Music sets the appropriate mood for each scene. Some music themes are repeated whenever particularly tense scenes happen. This ends up making paranormal scenes predictable. The star of the sound design is the voice acting, which is provided for every single line of dialogue in Neighbor. It’s incredibly impressive and expressive, and each line is spoken in native Japanese, which adds a certain charm and authenticity to the originally Japanese game.

Neighbor is a compelling horror story, and without Otusun Land’s localization this visual novel would have been lost. It’s a Japanese classic rediscovered and revived, and definitely worth a readthrough if you’re looking for a thrill. Find Neighbor on Steam here, and visit the official website here. The iOS and Android versions of Neighbor are currently only available for original backers of the project on Kickstarter.

Story: A thrilling story captivates readers. I could not stop reading, and played through the whole game in one sitting!

Sound: Otusun Land goes above and beyond, voicing every line of dialogue in the game.

Controls: There are minimal controls to make gameplay as streamlined as possible, but the addition of tips is awkward.

Final Rating: 8.5/10. Neighbor is a great read for those looking for ghost stories or mysteries.

Do you believe in ghosts?

Every once in a while a person needs to blow off some steam after a long day’s work. Happy Room is the perfect stress reliever for these types of situations with its violent, sandbox-style gameplay. Developed by Mana Potion Studios, the game provides an infinite queue of ragdoll test dummies to dismember, torture, and experiment...

Created by the widely known Black Shell Media’s game development subsidiary, Black Shell Games, Overture is a roguelike RPG with plenty to offer. It is a clean game with a surprising amount of depth and creativity in character selection. Practically every essential roguelike feature is included, from dungeon boss battles to a plethora of loot...