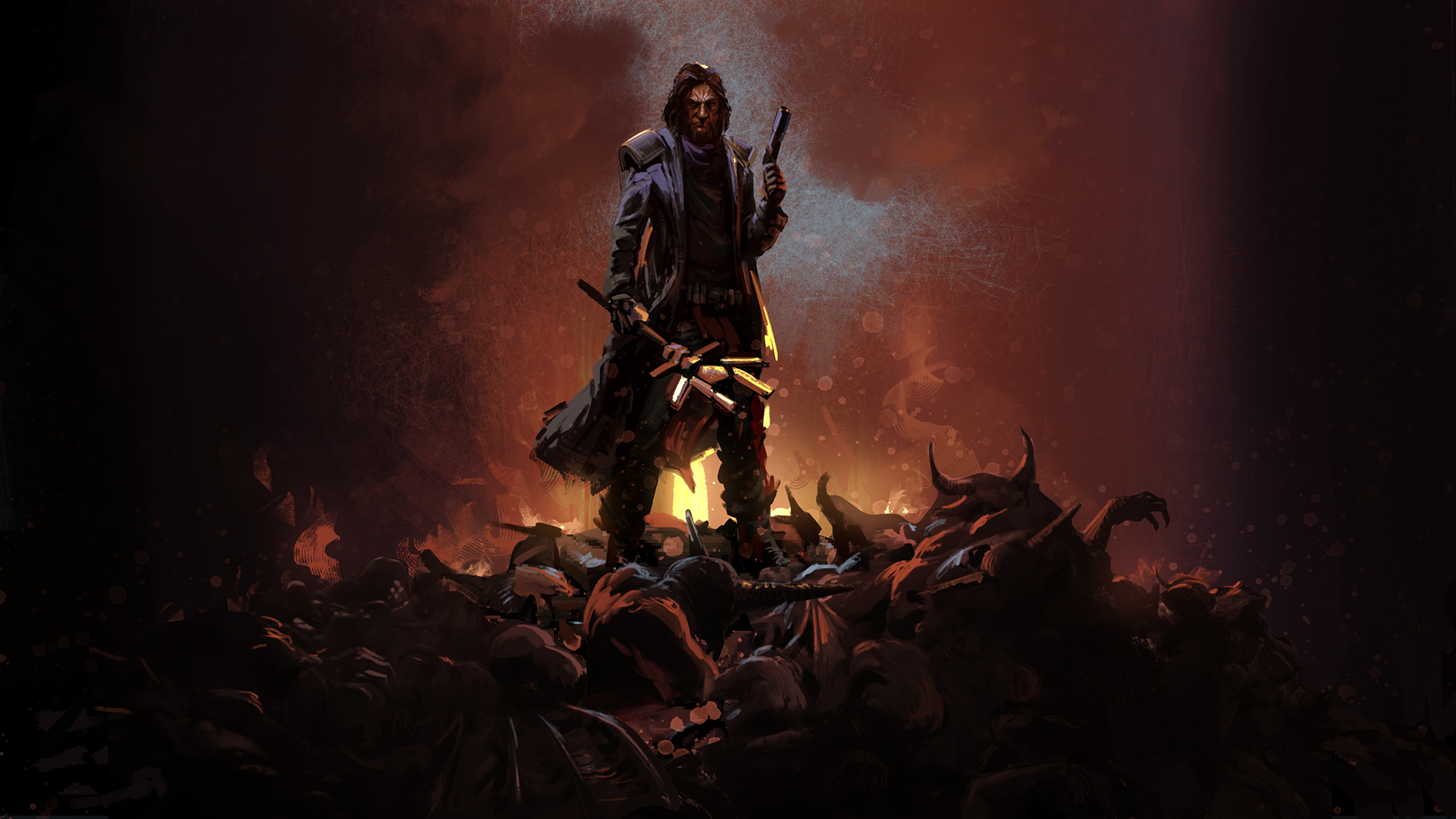 Project Warlock opens to an image of the protagonist fighting off a horde of monsters while upbeat metal plays. The tone is perfectly conveyed through this scene and it only compounds when you click “New Game” and are immediately dropped into a room with a weapon and a spider biting your heels. Project Warlock is a fast-paced retro shooter, taking the most inspiration from the original Doom and HeXen. Its most outstanding callback is an option to lock the ability to look up and down, a feature that didn’t exist in the first PC shooters.

Four chapters, each with a handful of levels capped by a boss, entail all the content at the time of writing. Much like its predecessors, the game has short, amazingly designed levels, frantic arena-style battles, and lots of secrets. With a hardcore permadeath, replayability is highly encouraged and extremely gratifying. These type of shooters have always had a certain level of camp and this one is no exception. There is a multitude of references to other shooters, such as the aforementioned Doom and HeXen but also Serious Sam and Shadow Warrior among others I might have missed. There is an entire chapter that acts as a reference to John Carpenter’s The Thing — horrific alien shapeshifters and all.

There are 14 weapons the player can find, with most of them upgradeable to one of two superior forms. Core stats such as ammo capacity and magic ability can also be upgraded, along with utility-based perks. Put together, these features allow for a decent degree of tailoring for your style of combat and make subsequent replays enjoyable through being able to tinker with different play styles. Perks generally favor guns or magic abilities, and on the hardcore setting, make for some harrowing decision making in the early game.

Firearms are extremely powerful but require ammunition, with some being limited by a slow firing rate. Magic tends to be more utility-based although there are some powerful spells that can be acquired later. The roster of guns comprises the usual fair of pistol, pump action, and double barrel shotguns, miniguns, dual Uzis, and rocket launchers, with a few others. The only weapon that uses mana is the early-acquired beam staff which has limited usefulness until upgraded.

Weapons and enemies are doled out at an even pace, making for a satisfying difficulty curve. Even on normal difficulty, the player will find themselves scrounging for every scrap of ammo and health they can find, desperately searching for secret rooms containing hidden caches and shortcuts. Enemies are fast and numerous, requiring a considerable amount of ammo to be expended to clear each encounter. Project Warlock never loses its stride, however. Between the high-action combat arenas are eerily calm hallways and labyrinths. A good mental map and the “Light” spell are your best friends in these sections, with the level design itself providing a thoughtful challenge. Enjoyable from the first moment to the last, Project Warlock keeps you engaged in an all-out extermination of evil.

Each level has its own color palette and visual theme, including castle, arctic, Egyptian tomb, futuristic city, and Hell, which acts as a dark mirror of the other worlds. The levels and their denizens are rendered in beautifully detailed 2D pixel art. Despite the low-resolution art style, there is no shortage of detail. Books, bottles, and other seemingly unimportant effects litter each stage, adding a “lived in” look to each corridor. Secret walls look just slightly different enough to be noticeable. Enemy attack animations can be frightening in the dark hallways, with their death animations being extremely satisfying to watch, unless you choose to explode them to bits (also fun to watch).

Rounding out the terrific sense of atmosphere are the game’s music and sound effects. Each chapter has its own tone conveyed through the level themes. High action metal sets the stage most of the time, though moody, bassy tunes can sometimes be found, usually complimenting a labyrinthine level. I highly encourage you to check out the OST, as a mere description doesn’t do it justice. For sound effects, the guns sound just amazing. Shotguns *ka-chunk* loudly and poignantly, acting as punctuation marks to combat. Automatic weapons really convey just how much lead you’re dishing out. Flamethrowers burn and crackle, setting a pleasant backdrop to the screams of pain and death coming from your hapless foes.

The story of Project Warlock is minimal but gets the job done. The gameplay is what’s on focus and the story knows that. Being relegated to text crawls at the end of each chapter, it supplies just enough information to get you in the mood for killing monsters and not much else. A typo here and there doesn’t bring down the experience as a whole. Something that does weaken the experience is how you select magic, requiring you to hold the interact button before scrolling. There isn’t a fast way to change spells like with weapons so it’s rare that I actually bothered to switch to anything other than the light spell. Specializing into the Lightning Staff weapon can also trivialize combat to a high degree, at least on the normal difficulty.

These complaints are minor and don’t diminish the amount of fun you can have, just dissuade the player from really going all out into a magic-based playstyle. The gunplay and level design more than make up for that. Which leads to a rather pertinent question, “Where is the multiplayer?” No information could be found at the time of this review’s writing, though it will be a welcome addition if it ever comes. All that said, Project Warlock is a heart-pumping experience that deserves to stand alongside its influences as a classic retro shooter.

Enjoyable from the first moment to the last, Project Warlock keeps you engaged in an all-out extermination of evil.

Shadow of the Tomb Raider Review