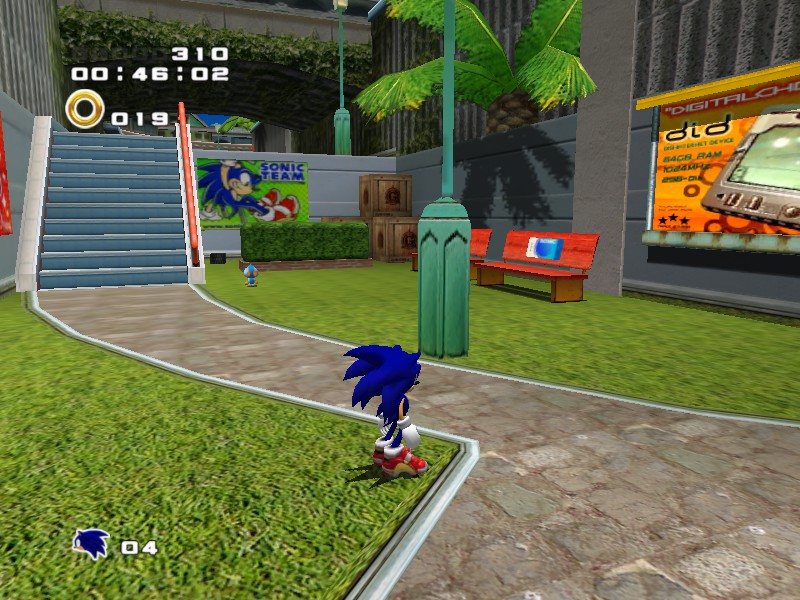 Being one of the most famous game series of all time, Sonic the Hedgehog has been published on almost every game console, starting from its first release on Sega Genesis. One of its games called Sonic Adventure 2 was originally released in 2001 for the Dreamcast and was the last Sonic game for the Sega platform. After that it was re-released for PC in 2012.

As an ‘old school’ game, Sonic Adventure 2 has a retro chic and boasts 3D-platforming gameplay. Its graphics are simple, but stylish. The music fits well and is not boring, while sound effects are clear and well-balanced. The game consists of six playable characters, each of which has approximately equal gameplay time, including Sonic and Shadow the Hedgehog. The main villain is, as always, the evil scientist Dr. Eggman. Two campaigns, Hero and Dark, contain more than thirty challenging stages combined. Both stories are intertwined and contain the entire game story, which is integral and well-written. The player can move completely through one of the campaigns or switch between them at will.

Sonic is really dynamic and slowdown occurs rarely, most of the time he runs through the levels at full speed. The stages and quests are diverse and wonderfully designed, especially if you take into account that the game has very humble system requirements. Beautiful textures are all around the mountain, hilly, seaside and city levels. What distinguishes Sonic Adventure 2 from many other popular 3D-platformers is its apparent non-linearity, which really gives the player a sense of freedom. The game’s world seems bigger than it really is. Some levels contain lots of large open areas, which is convenient when searching for items.

The game creators took inspiration from Southern California, the location of Sonic Team USA’s headquarters. The urban levels remind you of San Francisco and its Bay Area environment, while open space areas are more likely to be taken from Yosemite National Park landscapes. However, according to the plot, the game offers a fictional location which is called “Central City”.

Each level is played by a different character, but the main protagonists are Sonic and Shadow. The health system is based on collecting rings that are scattered around the levels. When the character is hit by an enemy it causes them to drop some rings, and running out of rings results in losing a life. After each stage, the player is given a score depending on how many rings were collected and how much time was spent within the level. The player also receives a rank grade from A to E, with A being the highest. Separate from the campaigns, there are bonus levels called Chao garden, where the player can raise their Chao and play minigames.

Sonic Adventure 2 might seem easy, but it’s actually pretty hard to walk through, especially when it comes to killing bosses. There are some tricky button combinations in boss battles and they are used rarely during the ordinary stages. An inconvenience of using a gamepad is the X-axis inversion. Another easily noticeable disadvantage is that the camera does not rotate with the character, like in many third-person action games. It can be rotated manually, but once the character moves, the camera retakes its control.

There’s not much voice acting here, especially compared to the original Sonic Adventure game. This soundtrack also has fewer lyrics than the original, but the music is lovely and nice to listen to. It is somewhat cheerful and heavy on guitar riffs. However, there are some totally instrumental and hip-hop songs, which are quite surprising. In some ways, it causes nostalgia for the millennium’s first video game music. Most of the tracks are authored by Japanese musician and game composer Jun Senoue. He is also known for creating music for other Sonic games.

Sonic Adventure 2 is an absolute must-have for fans of the series. If you had a chance to play the original game on console, you can discover it again on your computer through Steam. However, Sonic Adventure 2 is not only recommended for those nostalgic feelings we experience every time we play a retro game. It is also a great chance to get acquainted with the popular Sonic series and dive into a unique atmosphere.

Graphics: Nice and picturesque, textures are colorful and not demanding.

Story: The plot is entertaining and progresses nicely.

Gameplay: Gameplay is dynamic, especially the levels with Sonic and Shadow.

Controls: Easy to use, but the player has to get familiar with manual camera rotation and the X-axis inversion.

Final Rating: 8/10. In most aspects, Sonic Adventure 2 might look like an ancient, old school game. On the other hand, when you start playing it, the game becomes an awesome, colourful, fast-paced adventure with a gripping story and lovely music.

One of the SEGA's almost-20-year-old chef-d'oeuvres isn't any less enjoyable to play on PC.