A modern shoot 'em up bursting with energy. 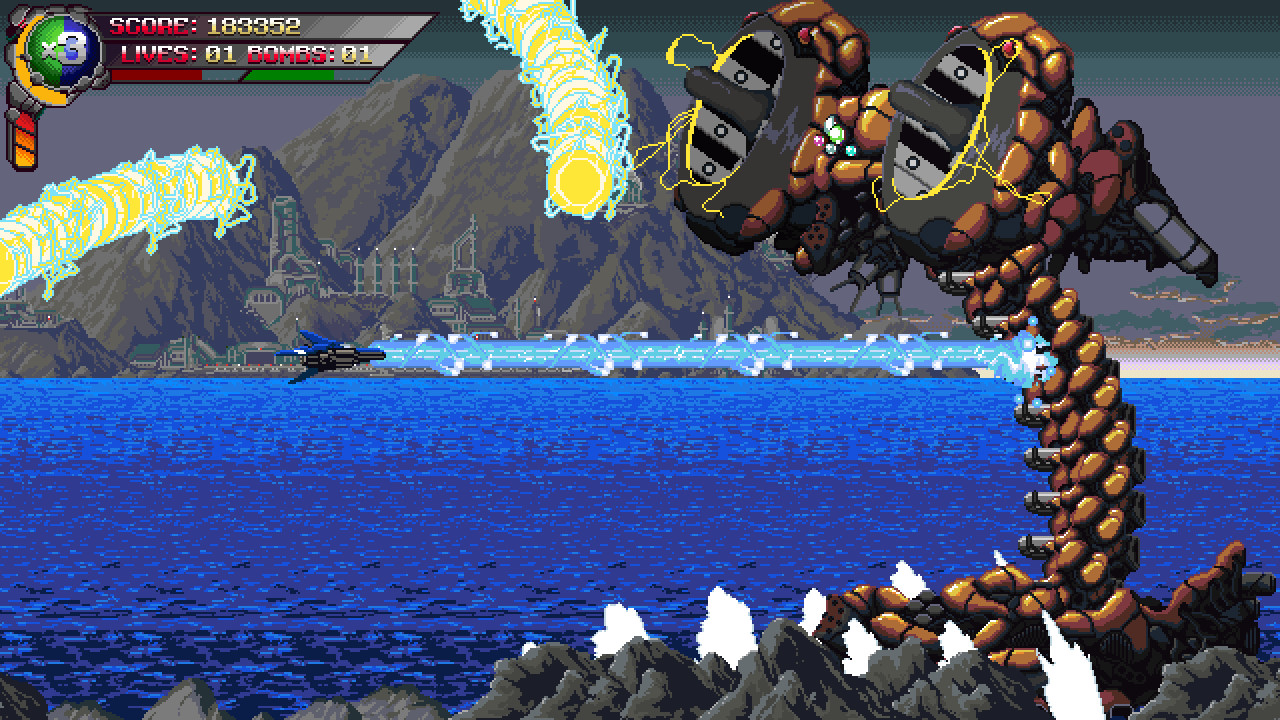 Devil Engine is a fast-paced, horizontal, bullet hell shooter heavily inspired by the era of 32-bit arcade shoot ‘em ups. The game could have very well been a remake or re-imagining of some older title, but turns out to be completely original. Your task is to navigate through a futuristic environment dominated by legions of biomechanical forces and destroy the Devil Engine. Doing so requires masterful control over your ship — a small vessel equipped with some heavy weaponry and speedy thrusters. As you progress through the game’s six stages, your margin of error rapidly shrinks and you’ll realize reaching the Devil Engine isn’t going to be easy.

My experience with Devil Engine didn’t get off to the best start from a technical standpoint. The game launches in a very small windowed mode without any instruction on how to proceed past the initial screen and into the menu. Clicking doesn’t do anything, and it turns out you need to press the “Z” key to advance. Once you actually get to the main menu there are a bunch of extra settings that let you customize the UI, visuals, and audio. It’s ironic how it took me a minute to figure how to reach the menu, and yet you’re able to set everything from the color of enemy bullets to visual filters once you’re there.

The game opens with a beautiful cinematic that gives a brief intro to your mission. An easy and hard mode are available, but I’d consider the easy one to be fairly difficult in its own right. Each stage consists of a hearty number of standard opponents, along with a few bosses that have relatively complex attack patterns. It will take you multiple attempts to fully memorize a boss’ dance, but the rest of a stage can usually be improvised. It’s hard to tell if bosses are defeated based on damage or finish their entire attack pattern regardless of how much firepower you dish out. Figuring out where to target a boss and if you’re landing hits is also unclear. They’ll sometimes flash when taking damage, but it’s inconsistent. Since bosses are the most challenging part of the game, these battles need to be as intuitive as possible.

A massive difficulty spike occurs in the third stage, where projectiles begin to come at you in 3D from the background of the level. It’s extremely disorienting and impossible to get comfortable with. My strategy was to play flawlessly up until this point in order to build up a number of extra lives and hope for the best. Devil Engine has an interesting roguelike feature as well. Your score from each run will be added to a cumulative total score that unlocks various features, including more continues. Other unlocks are strictly cosmetic as far as I can tell. This system guarantees that you progress further through the main arcade mode the more you play it, as with enough continues, you’ll be able to beat the game no matter your level of skill.

Your ship is equipped with three components: a standard attack, special attack, and shield. The shield has to charge up, but is extremely powerful in that it will erase most enemy bullets in a relatively large radius. Grabbing weapon orbs will switch your standard attack to either a spread, homing, or laser attack. Eating multiple orbs will upgrade your standard attack up to three times, and dying will downgrade it. You’ll gain more lives and missiles based off points, which can be increased greatly by your score multiplier. Most of these features are standard fare for a shmup, except for the shield. Devil Engine would be near-impossible to complete without it.

Devil Engine’s visuals are outstanding and serve as a great example of how to bring a 32-bit shmup into modern gaming. Backgrounds are detailed and colorful, enemies stand out, bosses are unique, and the soundtrack keeps you rolling along. It’s a perfect tribute to the recognizable Thunder Force series, developed by Technosoft. In fact, its rock-oriented soundtrack has been created by the composer of Thunder Force V, Hyakutaro Tsukumo. I’d describe Devil Engine’s theme as futuristic Japan with a mix of both urban and rural areas. My favorite transition was soaring out of a dreary military landscape and into the blue sky above a tropical forest.

Devil Engine was able to provide a classic arcade gaming experience, which goes well beyond the sphere of technical game design. I’ll admit I’m not the best at bullet hell games but can appreciate a polished finished product. As a bonus, I actually felt somewhat capable of flying through the game’s stages thanks to smooth controls and a safety net of continues. Devil Engine is a must-have for anyone who remotely enjoys a good, old-fashioned shmup.

Graphics: Stunning and smooth visuals fill every second of your experience through six vibrant stages.

Sound: Rock tunes zip through your ears and supplement fast-paced battles in the sky.

Replay Value: The game's roguelike element will keep players coming back to its main arcade mode.

Final Rating: 9/10. Devil Engine was able to provide a classic arcade gaming experience, which goes well beyond the sphere of technical game design. It's a must-have for anyone who remotely enjoys a good, old-fashioned shmup.

Reaching the Devil Engine isn’t going to be easy.