How far will your devotion take you? 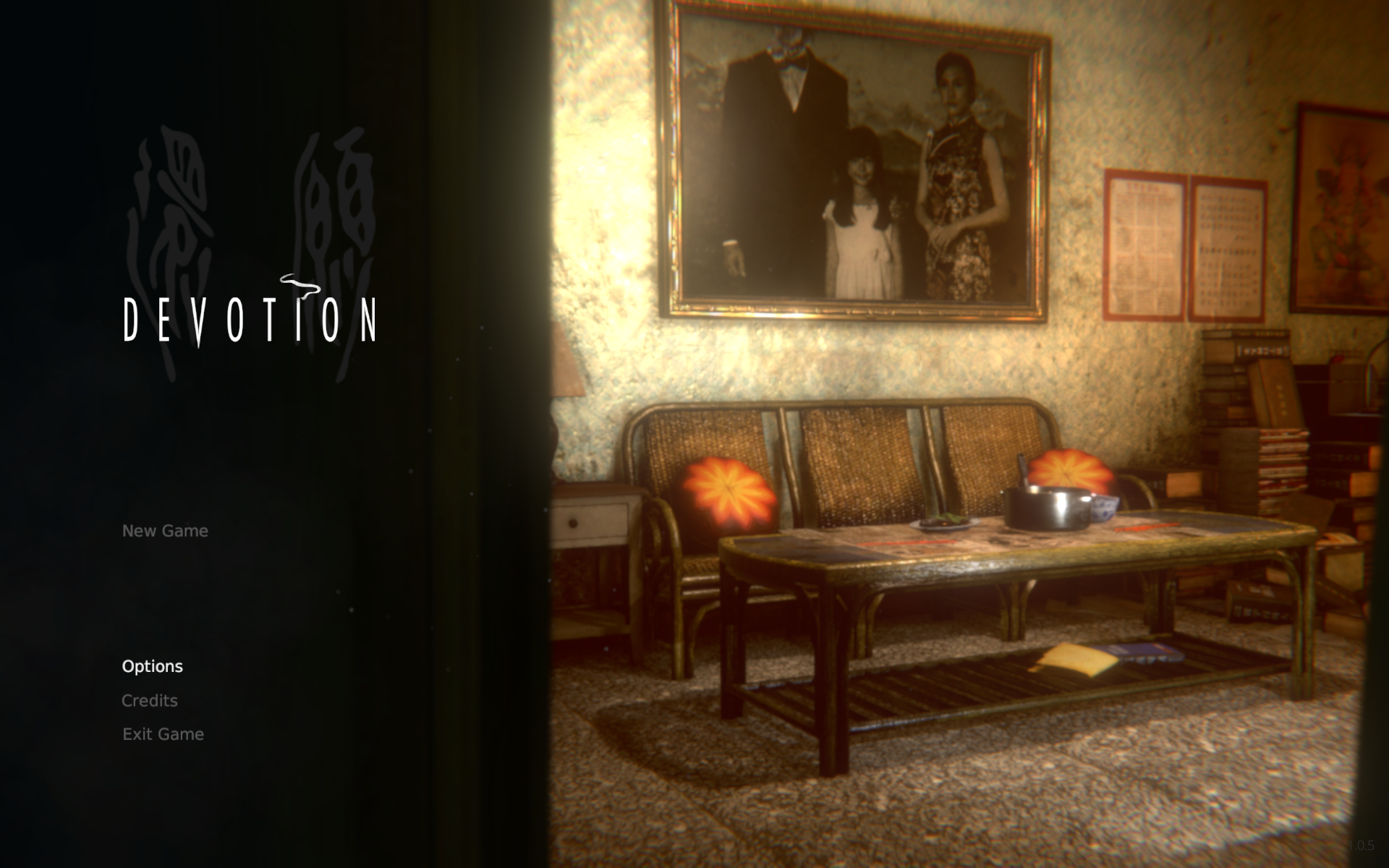 Devotion is a first-person psychological horror game developed and published by Red Candle Games. Due to controversy surrounding the game’s contents, it is currently unavailable to purchase, but a review of this game is still relevant today in the wake of initial reactions. Devotion was originally released for PC on Steam on February 19th but was pulled off the store page on February 26th. As of this writing almost a month later, it is unclear when exactly Devotion will become available again.

Devotion follows up on the success of Red Candle Games’ first title, Detention. While the games are not related by plot, they share a common background of being horror games set in Taiwan during the late 20th century. Red Candle Games is Taiwanese-based, and this plays a critical part within their titles. Devotion’s plot does not hold anywhere else besides Taiwan, and cannot be displaced to a different setting. Along with being unmistakably rooted in East Asian culture, intricate environment details resonate strongly with Taiwanese players and bring a level of nostalgia that reaches out to them in the midst of a Western-focused game industry. This reads well with other players (non-Taiwanese) as well, and is not alienating… for the most part.

Controversy surrounding Devotion comes from an easter egg hidden among the many posters that line the walls. Devotion takes place within an apartment in Taipei during the 1980’s, and one surrounding alleyway features a talisman with “Xi Jinping Winnie the Pooh” written on it, along with a pun that spoken aloud sounds similar to the words “your mother moron.” This is not a historically accurate reference to 1980, and rather pokes fun at a ongoing meme from 2017 comparing China’s leader to Winnie the Pooh. The talisman’s appearance sparked a review bombing on Steam from upset Chinese players. Consequently, the texture file was patched out in an update released the same day of its discovery: February 21. Devotion was officially removed from Steam in China on February 23, and later removed from Steam globally on February 26. The vice premier of Taiwan, Chen Chi-mai, has spoken about the incident, saying “Only in countries with democracy and freedom can creation be free from restrictions.” This statement criticizes Chinese leader Xi Jinping for his mass censorship of Chinese media. Other political references may still remain in the game, and Red Candle Games has openly acknowledged and apologized, as well as halted distribution of the game in order to find and remove those references (and fix other bugs). A lesser-known reference features a newspaper in-game using the term “steamed bun” to refer to a prisoner; “steamed bun” is also slang referring to Xi Jinping. Red Candle Games has offered full refunds for players unsatisfied with the game, but (understandably) cannot patch and remove references from Chinese pirated versions of Devotion. For now, Devotion remains inaccessible for new players.

Despite the political tension Devotion has caused, the game still remains an incredible play, understandably rising to fame on Twitch streams in late February. It’s especially easy for western players to miss the political jab in a script that remains unreadable to them and has no effect whatsoever on gameplay. The complexity and depth of this psychological horror definitely makes Devotion a title to check out once it is re-released.

As earlier mentioned, Devotion takes place in an apartment in Taipei during the 1980’s. The game opens with a flashback scene, where main character Du Feng Yu hears his wife Gong Li Fang calling to him from the kitchen. Her dialogue reveals the existence of their daughter, Du Mei Shin. After this initial exchange, the player as Du Feng Yu wakes up to find themselves in the same room as in the flashback, but now in the present day. The apartment is abandoned and run down, with no signs of life. Various objects littered around the room can be placed in the correct positions according to Feng Yu’s memories, which will trigger further flashbacks. Successful flashbacks will alter the apartment to a different point in time, where Feng Yu must repeat the process of replacing missing items. He relives the various stages of the apartment during his life, from marriage to the present day, and through these recollections the player learns the truth of what happened to his family.

The realism of the game creates a truly unnerving and spectacular experience. Every room in the apartment is beautifully rendered, and textures are minutely detailed, going as far as to include real photographs framed on the walls rather than rendered pictures in the game’s art style. A masterful soundtrack by Vincent Yang keeps players on edge as they solve various puzzles, and the entire game is fully voiced in Chinese with English subtitles.

The player as Du Feng Yu is never in any explicit danger. The unsettling activities within the apartment are a mix of hallucinations and the actual supernatural. Along with the eerie atmosphere established through the soundtrack, visual cues such as flickering lights and dark hallways build suspense for the player. Flashbacks enter and exit via disturbing glitches and distorted flashing vision, and eventually hallucinations of blood and ghosts appear. As the game progresses, unmistakably real occurrences begin to torment Feng Yu. Lifesize ceramic replicas of him and his wife appear around the apartment in various parodies of daily life. They reposition on their own but are never seen to actually be moving. Other objects do move of their own accord, including a ballerina figurine and a ball. Leaving the apartment only returns the player to the apartment at another moment in time, and eventually the player can physically travel between the apartment as separate places as well as separate times. As the story continues, breaks from reality become even further exaggerated, and the player can no longer distinguish between the two. Through macabre symbolism, or perhaps a very real living hell, the fate of Feng Yu’s family is revealed… and it’s truly a horrific one. (There is extreme body mutilation and gore in one part of the game — be warned.)

Devotion truly managed to unnerve and frighten me, and gameplay toed the line between suspenseful anticipation and true fear. Every detail of the game, from its plot to its graphics to its sound to its overall execution, awed me. I’m even awed at the political controversy that sparked from one loose paper among many tacked within the apartment. Devotion is a must-have for lovers of psychological horror, and marries Taiwanese culture with a father’s toxic devotion for an experience that truly unnerves its players.

Fun Factor: This game is an absolute thriller, and there is a large amount of suspense that keeps players going.

Story: The story is a psychological horror, as warped as the hallucinations get or how far the apartment gets detached from reality. The overarching story of Feng Yu's family is something that could plausibly happen in real life, making it all the more horrifying.

Graphics: Graphics are detailed and absolutely beautiful. Individual rays of light could be rendered, and there were atmospheric particles. There was also an incredible amount of detail put into the surroundings of the apartment, down to each paper (as seen with the censorship).

Sound: Full voice acting in Chinese gives the story another layer of immersion. The soundtrack adds to the suspenseful nature.

Originality: The setting of this horror in Taiwan and the East Asian culture that permeates the characters' actions and lifestyle bring a fresh perspective into the psychological horror FPS genre.

Final Rating: 9/10. Devotion is a captivating and disturbing psychological horror that not only represents and draws heavily from Taiwan and its culture, but accurately portrays struggles, religion, and culture unique to East Asians.