Now it's time for me to get payback on the squishy ants. 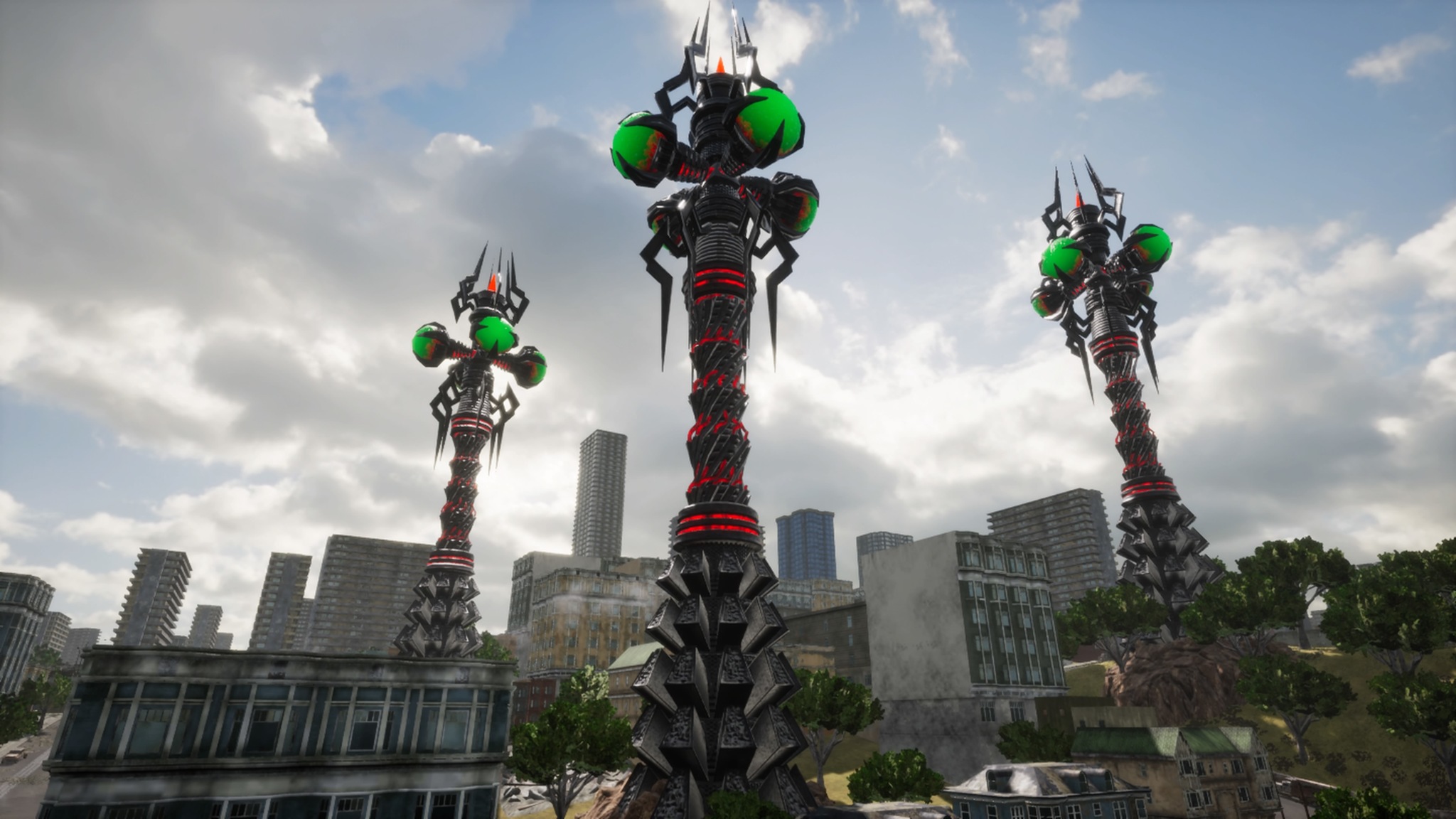 Every summer my room is invaded by ants. That said, repelling the little blighters can be a hassle when a) they return in greater numbers like a pack of Tusken Raiders and b) I’d rather not take a life (videogames don’t count). Why am I telling you this? Well, it’s because the latest installment of the Earth Defense Force series, Earth Defense Force: Iron Rain, focuses on annihilating LOTS of bugs. TAKE THAT ANT HIVE.

I’ll start with a confession — I’ve never played any of the Earth Defense Force titles prior to this one, so take my opinion with the perspective of someone fresh to the series, not a hardcore regular. After originally releasing in the East in the early 2000s, the series came over to the West on the Xbox 360 and gained somewhat of a cult following and mixed receptions with each entry. The series is essentially a B-movie monster flick in which your job is to exterminate ALL the naughty bugs intent on ruling the world. With that brief history lesson over (my research was extensive as you can tell), it’s time to get cracking with what you’ll get up to in Earth Defense Force: Iron Rain and how it plays out.

Plot-wise, just forget about it. The opening cinematic has a group of soldiers running in to battle alien forces known as “The Aggressors”, who spawn legions of huge bugs to do their bidding, and the EDF (Earth Defense Force) is there to stop them. Predictably, the prologue mission has everyone dying and you falling into a coma. Seven years later and you’ve risen from the coma like Jesus from the cave. Now referred to as “Closer”, you set about reclaiming the world from the infestation. There we go, plot summarised. There’s some repetitiveness to the environments and mission structure, but these are rotated frequently and missions only last 5-10 minutes. The gameplay itself is also entertaining enough to warrant a playthrough. Before we continue though, I’d just like to point out the graphics and voice acting for Earth Defense Force: Iron Rain are almost comical for a current-gen title, but for me personally (and I know others agree) they add to the game’s B-movie style, serving to further entertain rather than hinder the overall experience.

Firstly, let’s discuss the respectable customization options, which are a first for the series. You can choose your gender, body type, hair style, eye color, voice style, and face shape, all of which can be changed at any time. Amusingly, nobody in the squad questioned why I had suddenly changed ethnicity and gender mid-campaign, bless them. There’s also uniform customization, including balaclavas, helmets, and armor logos — all of which are purchasable via credits unlocked at the end of each mission. These credits are dependent on your rank, which is also another incentive to replay missions and boost your score. All in all, it’s not the most complex customization system in the world, but to give credit to the game, I could run around in my exo-suit as a blue-haired, dreadlock-sprouting badass, so that gets a thumbs up from me. The other members of your squad, whilst having preset backstories, also feel like individuals. Throughout missions they’ll sport what the kids call ‘banter’ with one another, dropping quips or remarks about the days before the Aggressors. It sounds cliché, but your squad really does feel like a unit, not just nameless grunts.

Moving on to just how you’ll be fighting the timorous beasties then. Supportive items include those that heal you or resurrect fallen allies, whilst others can call in vehicular support ranging from tanks and heavy-duty trucks to what I call ‘robo-chickens’ that you pilot and dish out hot, lasery death with. As a side note, each difficulty rank increases the amount of friendly fire damage you inflict on your squad. There are also supply drops that restock ammo and items, but using items during a mission will reduce your total credits earnt at the end, so it’s your choice how to play things out. It should be noted the items themselves automatically restock between missions, so you don’t actually have to buy them again, though there is a capacity limit to how much you can carry (class dependent) with each item varying in the amount of space it takes up.

Equipable offensive items include explosive grenades/mines and stun/flame/ice variations of each, alongside deployable turrets. Newer variations unlock throughout the campaign, but your main go-to weapons will be guns. Lots of guns. With assault rifles, shotguns, rocket launchers, grenade launchers, laser rifles, and even swords (yes, SWORDS), there’s no shortage of variation in how you choose to bring down the alien invasion. Each weapon has its pros and cons, but each will aid you in saving the world, so it’s largely personal preference as to what your loadout will consist of. These weapons, alongside the items you choose, can be equipped before each mission, with the option to create up to 10 preset classes if you desire. Unlocking weapons or items is a simple case of spending that hard-earned cash alongside energy gems scooped up from the corpses of the dead bugs. You may find yourself grinding at times, but don’t think gems are too scarce — there are plenty of bugs to squish after all!

Earth Defense Force: Iron Rain‘s four classes also affect how things might play out. Your standard trooper is a jack of all trades, master of none (sorry Jack) with a nifty dodge ability, whilst the Jet Lifter class can fly or hover around the battlefield, raining death from above. The Heavy Lifter class is your “tank”, with a bonus to defense, a deployable shield ability, and the cheek to wield two guns at once. The final class is the Prowler Lifter, which I’m told is a new entry to the series. It’s essentially a robo-powered Spider-Man, capable of flinging itself round the battlefield faster than the Flash on naughty herbs. This class can also take control of the giant bugs, so why in the name of all that’s holy wouldn’t you choose this one? Each ability costs stamina points which regenerate over time, so just be careful to keep an eye on those, lest you get caught amid a swarm with no chance of escape. Should this happen there’s also the chance you’ll have a charge of overdrive (1 per mission) that allows for unlimited ability use, faster reload, and a never-ending sprint for a short burst of time.

We’ve got this far describing how you’ll be fighting but not what you’ll be fighting. Fear not younglings, there are plenty of beasties to put down. Alongside the fact that the Aggressors are partial to deploying gigantic robots for you to deal with, there are also the gigantic bugs themselves. There are ants that shoot toxic goo at you, cockroaches that can explode and breathe fire, scorpions that will hurl poison, and even spiders that tend to spawn smaller (yet still massive) spiders. You might think this doesn’t sound too bad, but remember, THEY ARE ALL GIANT. Variation in enemy types isn’t huge and several well-placed shots to the noggin will get the job done, but you’re later introduced to variants that may be laser resistant or shrug off energy weapons like they are simply being tickled. It adds a slight tactical element to choosing your loadout, even if only a minor one. I’m also pretty sure I fought Godzilla at one point. Awesome.

Lastly on the checklist is online functionality. Alongside the chance to partner up online with another brave soul and save the world, there’s a competitive 2v2 mode as well. The premise is simple enough — kill bugs and collect gems, then return said gems to a drop zone to earn points. The enemy team can kill you and claim your gems, but so too can the bugs. It’s fun in short bursts, but there’s little tactical skill needed as things quickly descend into a free-for-all with masses of bugs on-screen. It’s decent enough to check out, but the main campaign is the meat of this meal.

Ultimately, Earth Defense Force: Iron Rain was, for me being a newcomer to the series at least, exactly what I was expecting — a B-movie style game that relishes in this fact and is more amusing for it. Will it win some narrative or visual award? Absolutely not. Will you have fun playing? Definitely.

Sound: By sound I am referring to the voice acting here. Oh boy, I'd love to get a go at doing this. Truly think anyone can shine if they try hard enough.

Graphics: Could be playing a PS2 game here to be fair. Do I care? Not at all.

Customization: There's actually a fairly decent customization system in the game. Considering it's not the major focus I'll give kudos to the developers.

Replay Value: There are several difficulty levels and a ranking system. If you're looking to unlock everything, buckle up to farm them gems. Overall, there's plenty of replay value.

Multiplayer: Why take on the bugs alone when you can do it with a friend? Fantastic.

Final Rating: 7/10. Now it’s my turn to get payback on the (not so) little insects that have plagued my room each summer for years. Who’s laughing now punks? That’s right, me!

My squad never questioned my constant appearance changes. I respected that about them.

The Call of Duty franchise is a bit like a roller coaster — it goes up and it goes down. Whilst I spend year after year blasting my way through each campaign (Black Ops 4 notwithstanding) and having a jolly time doing so, even I will admit that some of the more recent entries have...