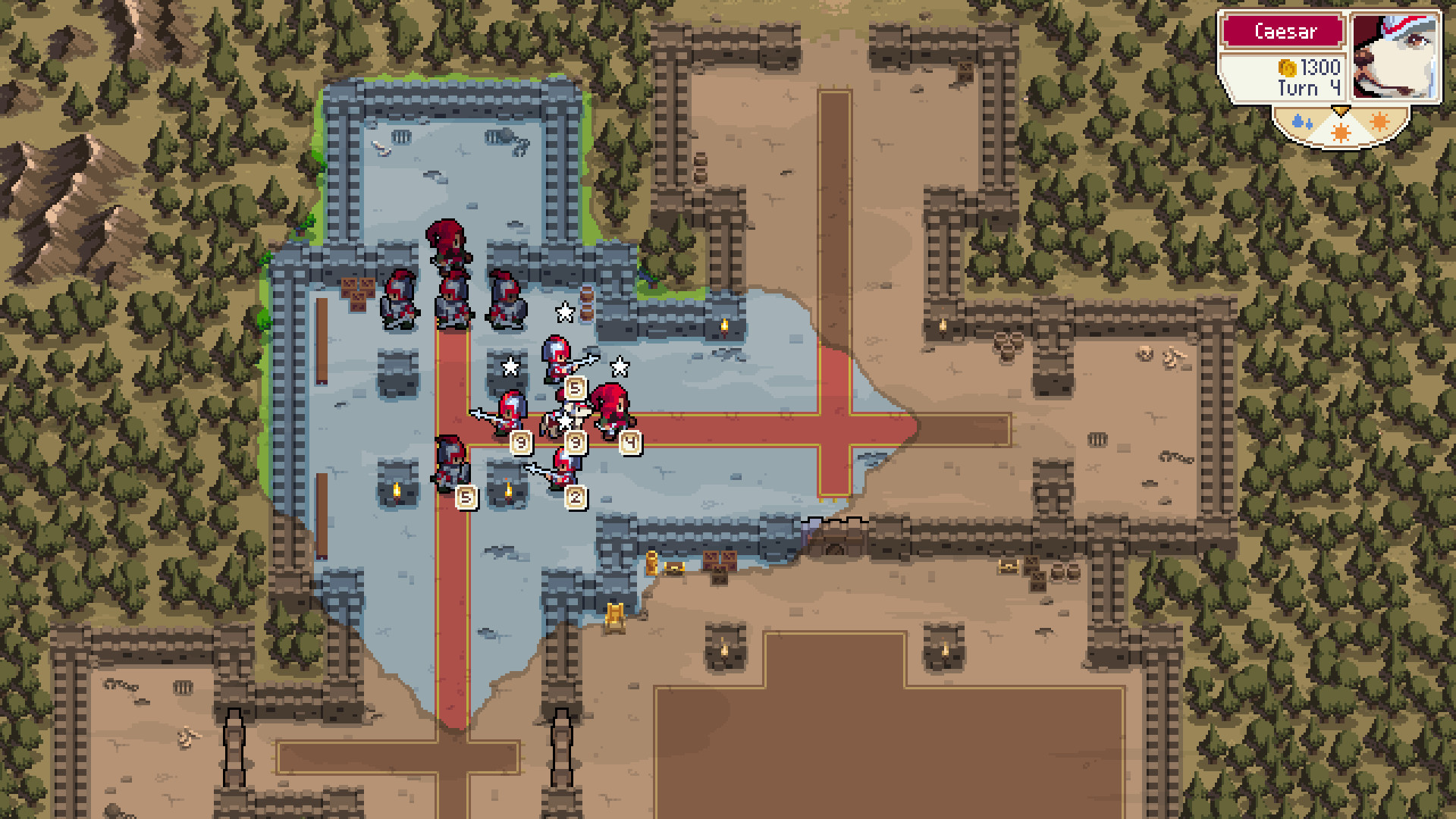 Wargroove is a medieval fantasy, turn-based tactical RPG. The most direct comparison would be to Nintendo’s Advance Wars series, though inspiration is also drawn from Fire Emblem. Players can adventure through the story-driven campaign mode, online and local multiplayer matches, or utterly expansive user-created content. There are a variety of units, factions, and game modes equating to an almost generous amount of content for the current price of twenty US dollars.

Top to bottom, Wargroove is a quality product. The most striking component of this game absolutely has to be its pixel art graphics. Every sprite is rendered in a cute “chibi” style reminiscent of classic console RPGs. Not only does every unit from every faction have a distinctive silhouette showing its identity at a glance, but each sprite conveys the personality of its chosen faction as well. Knights bob up and down eagerly awaiting battle, Florans skulk as they move across the field, and Undead trudge willfully onward. Portraits and higher resolution busts flesh out the commander’s appearance, which lets you identify with them as you go through the story. Animations and backgrounds stand up with their variety and uniqueness between the factions. After dozens of hours of playtime, it’s likely you’ll keep running into a new asset here and there.

Music doesn’t slouch either. Commanders each get their own musical motifs, special maps have dramatic overtures, and story moments are punctuated with either comedic or imposing dirges. The orchestral theme fits the fantasy setting while also paying homage to RPGs of old. For the most part, the soundtrack is upbeat and high energy, inviting you to play for quick sessions and setting an atmosphere that is friendly to younger audiences while still being catchy enough for any listeners’ ears to hang onto long after they’re done playing. Excellent sound effects punctuate successful attacks or add an extra twinge of shame when accidentally misplacing a unit and hearing their demise. Every faction has their own warcry which adds a personality to every battle. It’s not long until you may find yourself cheering alongside your soldiers when landing a successful critical attack.

The developer-designed campaign is a classic trope-filled romp through a fantasy continent. By no means is that a criticism, since Wargroove hits the mark on execution of those tropes. The story is equal measure comedy and drama, and is paced fairly well in that regard. The player takes control of a newly appointed ruler of the human kingdom who starts out on the run from the undead. As it goes in these kinds of stories, you seek out allies, overcome racial tensions, build relations, and overcome dark forces. Without getting into specifics, it’s the kind of journey that makes you say “just one more mission” each time you complete one. Charming characters and cutsie cutscenes make this a simple yet engaging storybook tale that’s hard to put down.

As mentioned before, Wargroove takes a very direct inspiration from the Advance Wars series, though not without its fair share of twists. Player and opponent usually start with a commander unit and main Fortress that must be kept defended. Villages can be captured to earn income which is then spent on a diverse selection of units. Infantry, cavalry, vehicles, and even mechanical Golems flesh out the roster with a pseudo “rock, paper, scissors” system for unit counters that veterans of this genre may be familiar with. Knowledge of each units’ strengths and weaknesses is a must to get through even the easiest of maps; thankfully the campaign slowly introduces mechanics and unit types to allow the player to learn as they play. The real skill, however, is understanding the map. The aforementioned villages are vital in supplying an army on terrain that has a huge impact on what units are viable on the field. Shall you use flyers to overcome mountains or seafaring units to flank the enemy’s position? There is always the trusty wagon that can transport units over vast distances on land, the utility of which has earned the wagon a sort of Internet fanbase. It really is that good. Suffice to say, there is a lot to wrap your head around in Wargroove. If that’s intimidating, then there’s no shortage of small maps to cut your teeth on. Those seeking a greater challenge, however, are sure to find it in the endgame missions, online multiplayer, or sadistic free-for-all style custom maps.

The golden sweet spot of strategy games is “easy to learn, hard to master” and Wargroove meets that criteria in spades. Infantry units are very obviously countered. Spearmen beat cavalry, for instance. As the player gets access to more units and more complex units, gameplay quickly stops being so easy. Sacrifice a weak unit to get an enemy unit into range for the rest of your forces? Send a diversionary force while you ambush with transport? Clever usage of your commander’s ability combined with creative strategies can overcome a by the numbers disadvantage which makes matches exciting to win. Pulling a victory out from your enemy’s apparent superiority is a difficult feeling to engineer in a game, but Wargroove has that potential in nearly every match. It’s hard to name another game that allows the player to fine-tune their challenge with such fine detail. You can learn at your own pace very easily with the sheer amount of settings and tweakable custom scenarios. All the tools are there for any player to learn and develop strategies of their own, against AI or human opponents. Every match in Wargroove has that golden opportunity to make a move that teaches you something new about the game.

The custom content available to the player is simply outstanding. Custom maps can be created with all the units and terrain you can find in the story missions, but there’s so much more you can mess with. The player has access to almost every tool the developers did. Fans have created entire campaigns complete with cutscenes, sidequests, light scripting, event triggers mid-mission, dialogue trees, and alternate endings. Everything is there to make your own game and many people have. If Wargroove was just this set of creator tools, that alone would be worth the price of admission. It really is a testament to how solid the core mechanics are that so many custom games and maps have been created, with people trying ridiculous things such as chess, auto-laners where players assist an AI ally, and even race maps. It’s hard to say where the creativity will stop with such a supportive community experimenting and sharing ideas, harkening back to when Blizzard released Warcraft 3 with its own explosion of custom content. For those that have already fallen in love with Wargroove there is an absolute smorgasbord of things to do for the foreseeable future.

Wargroove appeals very widely across the spectrum of video game fans. The presentation is very child-friendly while also fostering nostalgia in older players. The deceptively simple nature of the game lets players feel confident in trying things, inviting them to experience the more complex parts of the game at their own pace. Strategy veterans will get their fill with the multilayered strategy of unit compositions and map control. Custom content, if it keeps being produced, will eventually fine-tune the map design to get the most out of its mechanics. There is no one I wouldn’t recommend the game to, given the low time investment needed to understand and play a mission or two. Developer Chucklefish showed their passion with this game, from the music and art to gameplay design itself. It’s that rare passion that inflames the hearts of fans both casual and hardcore alike. Without a doubt, Wargroove has made a splash in the strategy genre hopefully sparking a resurgence in bite-sized strategy games.

Graphics: Unique, vibrant, and completely charming. A vibrant world that fleshes out characters and story.

Sound: Ranging from somber tunes to upbeat battle themes, the soundtrack is a delight as soon as the game launches.

Gameplay: Fun from the first click, Wargroove has an instantly likable quality that only grows the more you play.

Replay Value: Every mission has a ranking system that's fun to attack and improve on, with a virtually endless amount of user-made content that's sure to satisfy for a very long time.

Multiplayer: Whether you simply want to challenge your friends or try out your strategies competitively, multiplayer has something to offer for every skill level.

Final Rating: 8/10. Wargoove oozes personality, every aspect of it displaying evidence of loving craftsmanship. From the menus to sprites, every feature is polished with developer patches tightening up any loose bolts. Quality all the way.

Every match in Wargroove has that golden opportunity to make that one move that teaches you something new about the game.