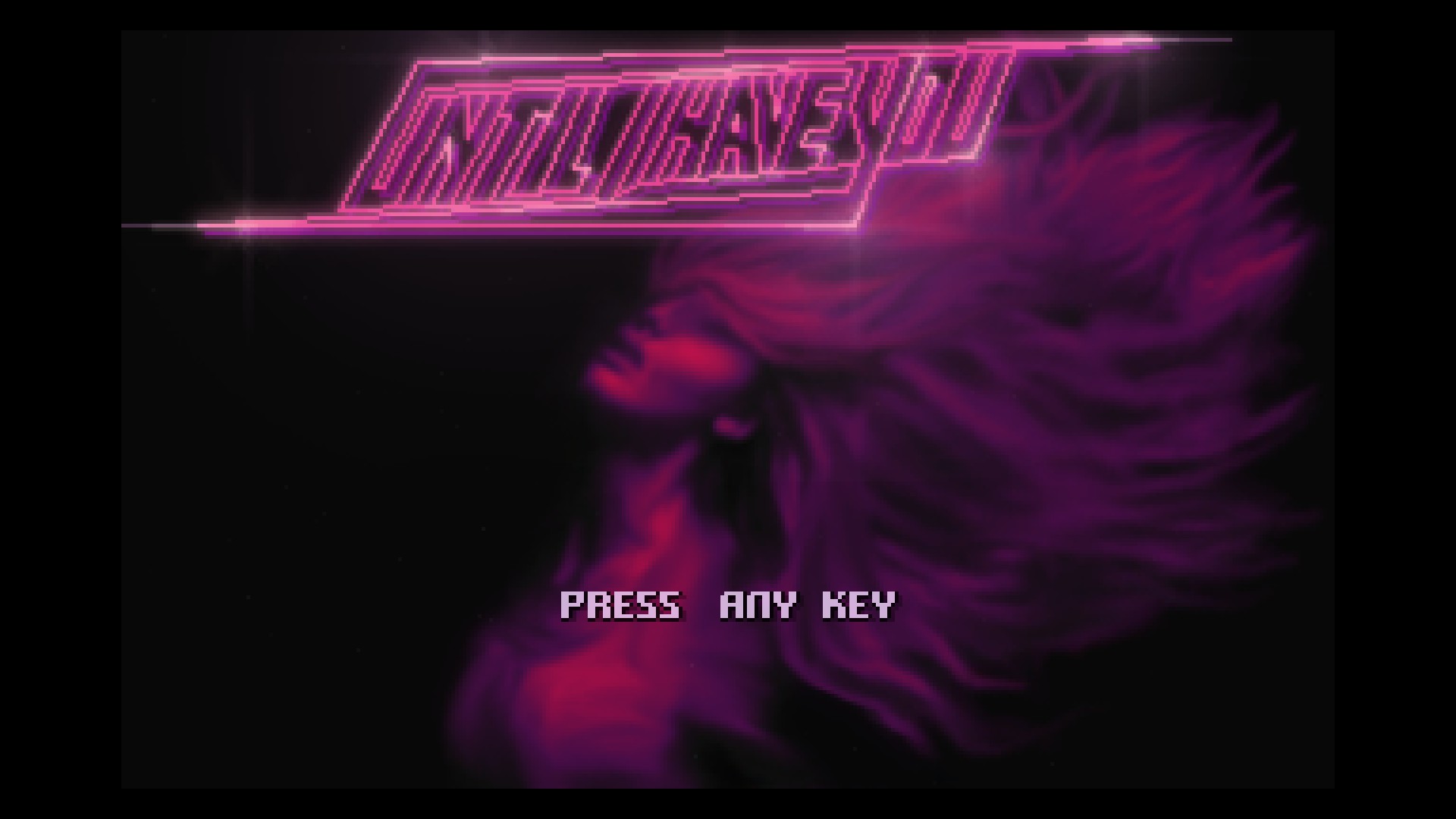 Have you ever wanted to go back to the 80’s and play Contra or the original Super Mario? Do you remember the frustration of constantly dying? Don’t you miss that? Don’t you miss the struggle? No? Yes? Well, I do. I remember both the angry moments and the joy that I felt when I beat a level. Somehow, dying was fun in a weird way. So if you miss that, look no further…than this review. I’m kidding. Let’s talk about Until I Have You.

Until I Have You is an indie game developed by Wormwood Studios. It certainly brings back memories of the 80’s with its retro graphics. It’s a 2-D side scrolling platformer where you basically run from left to right. Unlike the 80’s games, however, this has voice acting. Decent voice acting I might add; not some kind of robotic, techno, electronic, creepy voice acting.

The game starts off in a cyberpunk setting with the main character calling himself an Artist. He’s talking about something I won’t mention because I’m trying to avoid spoilers. Eventually, you’ll end up in a tutorial level where you learn about your new exosuit. Honestly, the exosuit just looks like a regular suit except with an awesome mask. Apparently, you are faster, stronger, and even have the ability to slow down time with this outfit. Granted, when time is slowed down, so are you. Also, the longer time is slowed, the more strain you have on your heart and mind, causing hallucinations. It’s a wonderful concept that I unfortunately rarely used. Why? Because I forgot about it and frankly, didn’t really need to use it.

Once you complete the tutorial, Artist begins his rampage. Here is where I got confused. If you read other reviews, especially on the Steam page for the game, people rave on and on about the story. For me, I didn’t find the story all that great. It was…confusing. Here’s the premise. Guy is a thief. Guy has a girlfriend/wife (Seriously, they kept jumping back and forth between the two that I have no idea if they are married or not. I’m calling her a friend with benefits.) who wants him to quit. He tries to quit. Big client gets mad. Kidnaps friend with benefits to make Artist do one final job. Artist goes on rampage killing everyone and everything. But…who is he rampaging against? The client or the final job? Is he actually doing the job or is he killing the client’s network? I was so confused about his reason for going crazy.

There are also scenes between levels where you end up in the Artist’s apartment. You can watch TV and see what happened in the world as a result of your completion of the previous chapter. It’s all propaganda but also fun to watch. I wish that I could have done more in his home though. The pictures of your targets are all pixelated and you can’t see them very well. You also have a wall of pictures of your friend with benefits but can only see one picture…which is also very pixelated. You can go to your balcony but, well, there isn’t anything to do there.

The voice acting in this game is decent. I did enjoy the narration, don’t get me wrong. Artist has a pretty sweet voice actor, as do the other characters, save the first female character you encounter but that really isn’t her fault. See, the main issue I have with the voice acting is that they pause after every sentence for about two seconds. It kind of plays out like this if I was talking to my fellow reviewer/Overwatch Weekly Brawl writer, Mr. Garrett:

Garrett: “Thank you for noticing.”

See how annoying that was? I swear, that is exactly how the game plays out. The dialogue is sort of funny and amazing, but the pauses…dear lord the pauses. They drove me insane. The entire time I was thinking, “Just say it already!”

The controls themselves are pretty solid, as well as the music. I know that there is a time slow feature that I barely used. Why didn’t I use it? Well, you can speed run through the stages. Yup, that’s right. This stubborn reviewer was determined to get the fastest time possible so he speed ran all the stages. It lead to a lot of dying, and I mean a lot. Fortunately, the music is out of this world. As are the controls, so long as you use a game controller. Don’t use a keyboard and mouse unless you’re a masochist. Just saying.

Overall, I really enjoyed Until I Have You. I didn’t get too attached to any of the characters, nor did I particularly care about any of them. I just wanted to play the game. I treated it like Super Mario and just played through the stages. The voice acting was great except for those stupid pauses. The controls were top-notch except for some minor tweaks that were barely noticeable. And for the grand prize of it all, the music soundtrack is free so you bet I will be listening to it all the time. In fact, I listened to it as I wrote this review.

**A review copy of Until I Have You was provided by Wormwood Studios.**

Sound: The music was out of this world and really fits with the theme of the game and background! They did an amazing job here. This definitely helped make the game great.

Story: Meh. That's really all I can say. They never really say if the girl is his girlfriend or wife. They kept changing that. Frankly, I stopped paying attention to the plot because it didn't really draw me in.

Developer Support: The developers are definitely keeping an eye on the Steam forum for this game. Complaints are met with professionalism and updates are explained thoroughly. They even explained why they removed the one-hit kill feature.

Controls: The controls are great so long as you use a game controller and not a keyboard. Sometimes, you think you'll have stopped running, but Artist will keep sliding. Physics I guess.

Replay Value: I'll definitely be replaying this. All cutscenes can be skipped, which is nice. But getting that 100% completion score is definitely something I want to try.

Final Rating: 8/10. You can enjoy Until I Have You again and again, but the voice acting tends to get on your nerves with the pauses. The story isn't much to brag about, but the music is absolutely phenomenal. The developers are also keeping an eye on feedback and make adjustments accordingly.

Old School Musical is a rhythm game developed by La Moutarde and published by Playdius and Plug In Digital. It was released September 13th for PC and Nintendo Switch. The self-proclaimed “wacky” game differs from other rhythm games such as Guitar Hero, osu!, and Project Diva. Unlike in traditional rhythm games, the songs in Old...