An Unfinished Mobile Game for PC 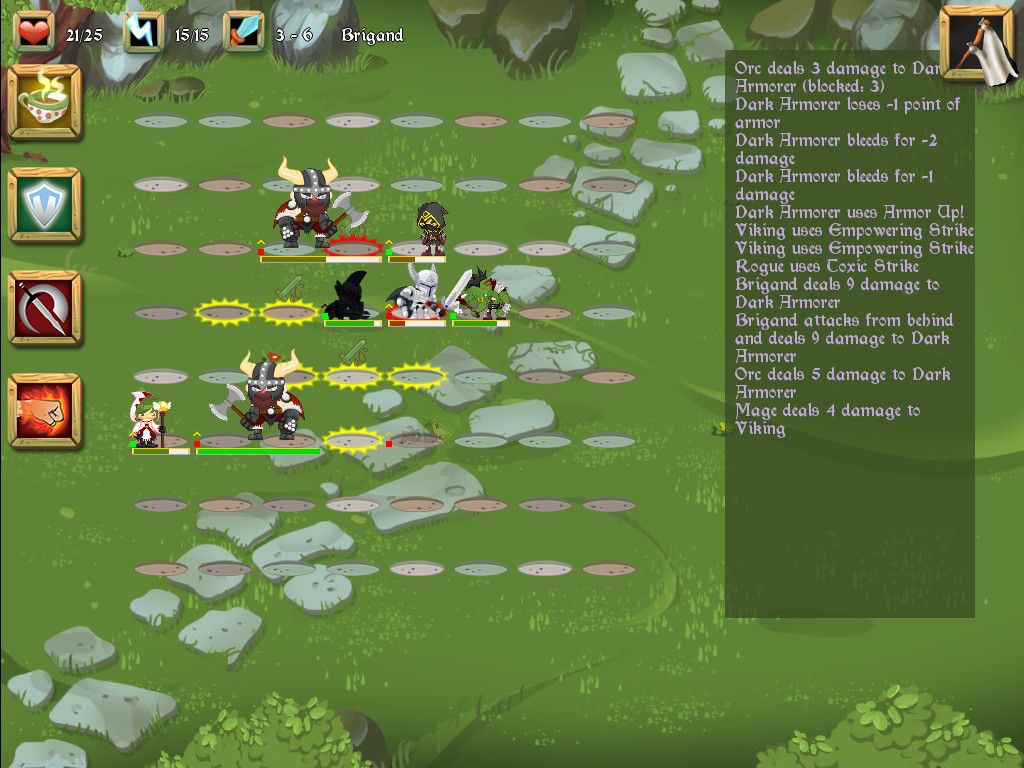 Blades of the Righteous is a turn-based RPG developed by Vladimir Slav of Coldwild Games. The goal of the game is to keep your small map from being overrun by evil forces while you manage resources such as Lumber, Gold, and Recruits. The game is somewhat like a roguelike. Your adventure continues until the evil meter fills itself, at which point you lose the game. Upon losing, you can either load a previous save, or start a new game.

The gameplay itself is fairly simple and enjoyable, though devoid of any real innovation or unique draw. The main game screen is an overview of your map, along with a list of available endeavors you can take, such as sending peasants to collect resources, fighting enemies to reduce evil level, purchasing new technologies, etc. The battle screen is a simple grid-based field that places player and enemy units randomly at start. The user commands his units through two phases: move/support and action. During these phases the player chooses optional skills and attacks to use. Afterwards, the enemy units do the same. The battle ends when all units of one side are defeated.

Where BotR excels is in its simple mechanics and break-friendly play. While full games can last as long as you can keep the evil at bay, the ability to save at any time and short duration of battles make it very easy to jump in for a quick minute to grab some resources. The developer also mentions on the game’s website that it is written in XML format and is open for modification.

BotR falls short in its lack of depth, innovation, and polish. The game is very basic, and a lot of the pieces look and feel like they are still development placeholders. The game experience as a whole feels like the gaming equivalent of an artist’s sketch: unfinished, unpolished, and more of an exercise in form and technique than an actual finished product. It is very reminiscent of the kind of projects student developers make in order to learn about different mechanics and to explore various techniques they can use later on in future games.

Another issue with everything feeling unfinished is that it feels unrelated. The game elements don’t mesh in any real tangible way. The music ranges from soft tones in a medieval style to a modern rock riff for the battle scenes. While most of the graphics fit in just fine, occasionally some of the graphical elements really stand out or contrast with the visual presentation as a whole. Still, the graphics seem to be the one area where things feel most fitting for the setting. Everything else seems to clash in one way or another.

The controls for the game are extremely simple (point and click with some keyboard shortcuts), but somehow they still manage to feel muddy and frustrating. Occasionally your pointer will click the wrong tile or selection, causing you to waste an entire turn for your unit or make a poor choice in the shop. Scrolling through the list of available actions on the main screen is pointedly difficult, especially as the choices stack up. The interface often occludes things you need to see or select by not scaling elements very well, and when things are visible they aren’t always apparent and never consistent. The worst is when commanding units. The game does a very poor job of telling you which rogue you are controlling and what phase it is.

These criticisms aren’t to say that it is a poorly developed game. Quite the contrary, it’s among the unpolished and slightly broken. Blades of the Righteous is still a nice example of many great design principles and functioning mechanics that are standard fare for an RPG title of its kind. The problem is that there isn’t anything unique or creative that pulls those mechanics together into a game or sets BotR apart from so many other projects like it. The simplicity of the game and small scale also make it a confusing choice for a Windows title. If Blades of the Righteous were targeted for mobile platforms, a lot of its criticisms would be greatly lessened. A game that almost demands short play sessions like this would stand a lot better chance of keeping my attention during a commute or while away from home than it does on Steam, alongside so many enthralling and captivating titles where I’ll never have enough time or money to experience them all. The game needs improvement and direction, but it does have potential. If it didn’t, I would say the game needs to be scrapped and taken off Steam. If the developer intends for this to be the final form of the game, I may yet take that stance anyway.

**A review copy of Blades of the Righteous was provided by Coldwild Games.**

Sound: Seems very out of place with the setting of the game. This is the element that feels most like a development placeholder.

Graphics: Probably the most fitting piece of the game. Sprites seem a little gritty, but they definitely look like they belong. That said, there is only one resolution, so fullscreen is hideous and sometimes text is occluded by other text or images, making it hard or impossible to read.

Replay Value: Definitely varies on your experience with the game. If you like the turn-based style and simple resource management, then the game will probably keep your attention for a while. If this isn't your type of game, you'll have a hard time sticking it out on your very first save.

Controls: Point and click. Simple as can be, but still lacking polish and refinement, as in other areas. Occasionally the pointer won't snap to the thing you are trying to select, and scrolling through your choices is frustrating when there are a lot of them.

Final Rating: 5/10. If the dev throws some polish on the game, cleans up the interface, and considers going for the casual mobile market, Blades of the Righteous can still become a noteworthy RPG. Currently it is not so.

The game needs improvement and direction, but it does have potential.