Thank God for the Triple Jump 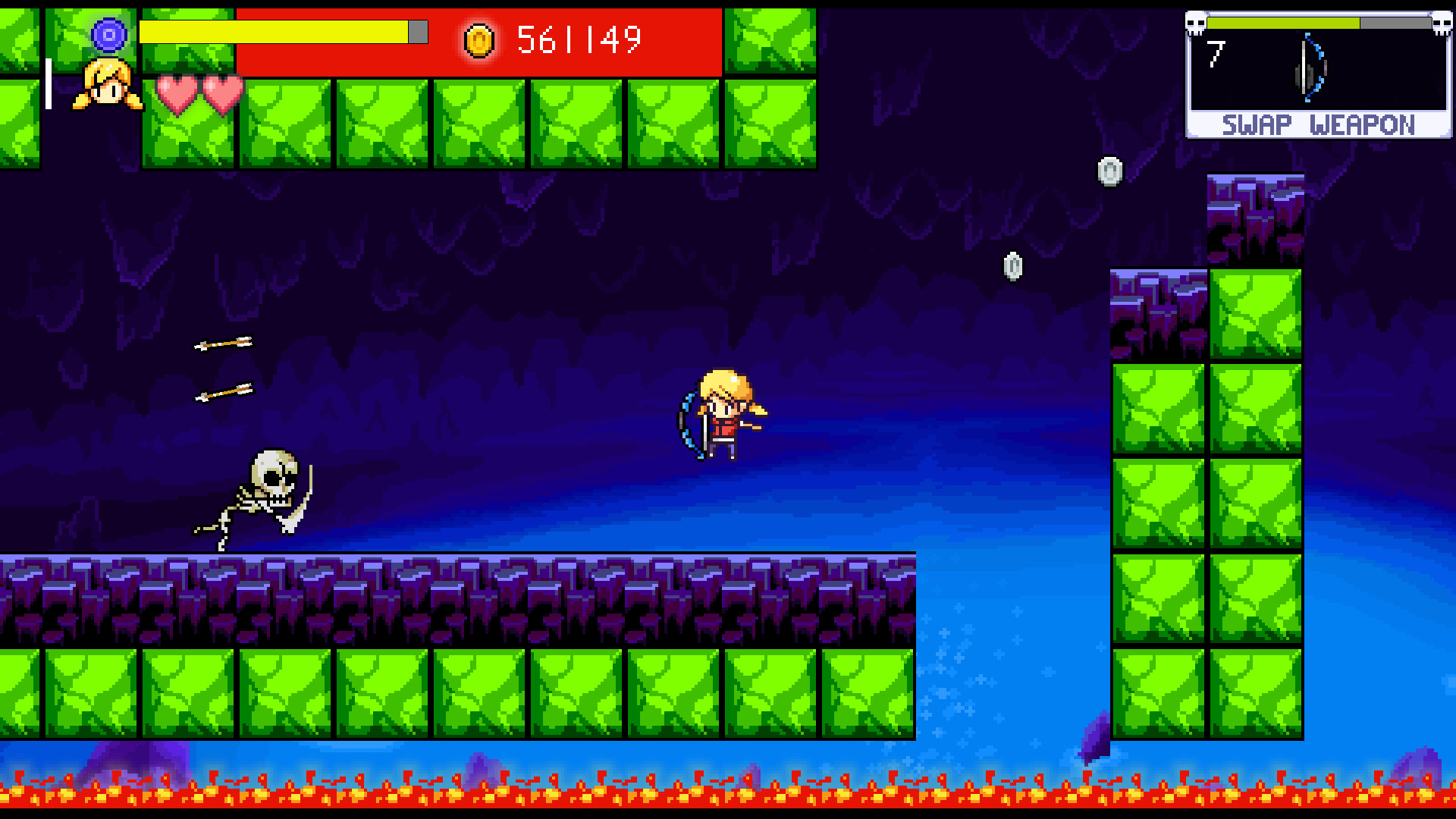 Walking into Cally’s Trials, I had few expectations. It looked like a typical platformer, with a standard 8-bit art style, and decent platforming. I figured the game would be either really easy or extremely difficult, and something would quickly steer it away from being fun. Well boy, was I wrong. Cally’s Trials is practically flawless, and provides hours upon hours of suspenseful entertainment for any audience. Although more features could theoretically be added, it has little to improve upon. I found myself absolutely immersed in the game, and unable to break away from it.

Cally’s Trials is a prequel of sorts to Cally’s Caves 3, and contains a roguelike, platforming adventure. The premise is simple — navigate through six dungeon zones, each with a ton of individual rooms, and try not to die. Easier said than done, of course. Now, Cally’s Trials doesn’t give you any instructions right away. Heck, it doesn’t even have a real title screen to begin with. You’re immediately thrust into a Pallet Town looking area with no idea of what to do first. Luckily, you’re playing a simple platformer where there are only two options — walk left or walk right.

Like I said, there is no tutorial when you begin the game. Strangely enough, the tutorial comes in the form of instant messages scattered throughout the levels. They are indeed helpful, but would be more useful if you had access to them early on. By the time you see these bits of advice, it’s likely that you have already figured out their info on your own. Fortunately, everything is reasonably straightforward and easy to understand through a little trial and error.

Cally’s Trials has a unique weapon progression system. Various weapons are picked up off the ground, not bought. Once you discover one, it’s permanently available to you for the rest of the game. Weapons have an EXP meter and level up based on damage dealt, with higher level weapons automatically improving upon appearance and performance. Some possible upgrades include less recoil, faster firing, or more bullets per shot. One change that always occurs during a level up is a damage increase. When fighting enemies, a damage counter lets you know when you’re landing shots and that your gun is actually doing its job. Bullet sponge enemies will fill the screen with red damage points, making you feel like an absolute boss.

The enemies you face are all extremely dangerous and may attack at any time. For this reason, it’s always a good idea to get rid of them before moving forward. Different enemy types are gradually introduced, each with different attack methods and abilities. The strongest opponents have weapons of their own and can fire back at you. Touching or getting hit by anyone will knock one point off your total health. Everyone you face has a significant amount of health in Cally’s Trials, but the bosses will take a ridiculous amount of firepower to defeat. To make things interesting, there are almost always safe spots for camping during boss battles. I found them a great opportunity to level up my guns, since they offer so much XP potential without any real threat.

Since Cally’s Trials is a roguelike, death is something to avoid at all costs. Getting killed directly by an enemy will be a complete “game over”, sending you back to the hub area and forcing you to restart the entire zone. However, falling into water or lava will only send you to the beginning of the room you’re currently in with just one HP remaining. Don’t be careless with that one heart though; falling twice in a row without gaining extra health in between will end your run. Basically, it’s absolute death with no respawns unless you happen to fall into liquid, in which case you’re given one more opportunity to advance. The pressure constantly keeps you on your toes, turning a simple platformer into a dangerous gauntlet.

Dungeons could be improved with fewer rooms, as they start to seriously drag on after a while. In addition, it would help if you could see how many rooms were remaining in order to better prepare and manage your resources. At least everything is constantly autosaved, so worrying about cramming a dungeon into a short period of time isn’t an issue.

The in-game shop is a lifesaver. It contains critical perks that will help you take the next step toward victory. The best items for sale are these zone shortcuts that allow you to skip dungeons you’ve already beaten. Otherwise, you have to start from chapter one every time. Although pricey, the shortcuts are well worth it. The other main item available is a triple jump, and I can’t tell you how much it’s saved me from plummeting to my death. Other bonuses include coin multipliers, health improvements, and insta-respawns.

I’ll warn you that Cally’s Trials is very addicting. I found myself valuing every second of play since death is so brutal. If sent back to the hub, I’d gear up and ready myself for another run. Getting more powerful each time is a rewarding experience, and made me stick with Cally’s Trials for quite some time. The lack of tutorial and unusual beginning are the game’s main weaknesses, but aren’t grave at all. Cally’s Trials felt unfinished at first, but would end up as one of the greatest roguelike platformers I’ve ever played.

**A review copy of Cally’s Trials was provided by VDO Games.**

Gameplay: I couldn't find a single bug in this game. Every aspect of each map was strategically designed to optimize my experience. I just wish there was a quick tutorial segment early on.

Replay Value: It's impossible not to keep coming back to Cally's Trials even after you die. Every time you re-enter a dungeon, you'll feel stronger than the time before. Beating the game takes many trials, but never gets stale.

Progression: Both weapon and character progression are implemented beautifully, with a focus on improving your chances of survival the more you play. The setup is addicting, and you'll surely find value in the ingenious progression system.

Fun Factor: Most importantly, Cally's Trials is FUN! I can't count how many times I broke into a sweat from sheer excitement. I even drew a small crowd of people to watch as I entered the sixth and final dungeon.

Final Rating: 9/10. Cally's Trials is a great title, that I highly recommend. Its creators deserve a ton of praise for doing a modern platformer justice.

One of the greatest roguelike platformers I’ve ever played.

Devotion is a first-person psychological horror game developed and published by Red Candle Games. Due to controversy surrounding the game’s contents, it is currently unavailable to purchase, but a review of this game is still relevant today in the wake of initial reactions. Devotion was originally released for PC on Steam on February 19th but...