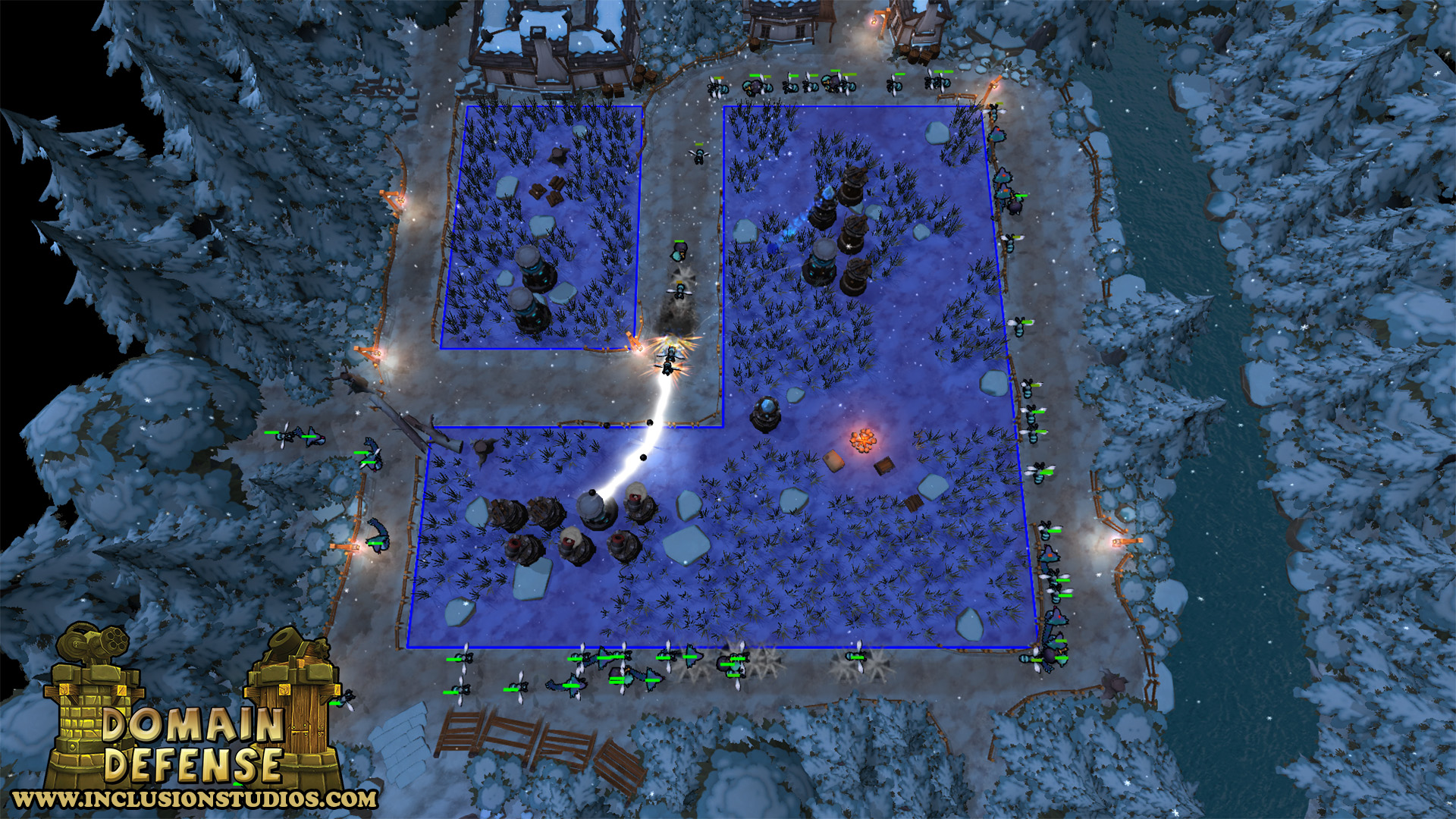 Domain Defense was fun…ish. Well, to a degree. It was frustrating. And cute. But mostly frustrating. Yeah, definitely frustrating. Frustrating in the way that I became determined to beat the first mode just so that I could try the other modes that were locked.

Have you ever wanted to grab a game by the code and manually delete it one line at a time in anger? Yeah, that was how I felt sometimes. 40 waves and I couldn’t get past 20 waves. Okay. Enough venting and self-pitying… or that defeatist attitude or whatever the hell you want to call it. Here is the review, and possibly some more venting.

Domain Defense is developed by Inclusion Studios. It’s their very first game that they have developed and I have to admit; they did do a fairly nice job for a first game but there is definitely a lot of room for improvement. Granted, I was frustrated more than 80% of the time and probably rage quit the solo portions a few times, but I still had some fun. Some. Especially in the multiplayer sections.

Right from the start, I was impressed by the artwork of Domain Defense. The enemies are adorable and when they die, each type has a unique squeak or squeal that causes the sadist in me to smile in joy. Yes, I’m fairly evil and it probably wasn’t the editor’s best idea to put this game in front of me as I murdered bouncy mice and fairies along with monsters like spiders and snakes. Every time one of them died and made that silly sound, I thought to myself: “This is how evil overlords are born. Through the mass murdering of naïve creatures who line up like lambs to the slaughter. Come you, silly things. Come to my welcoming towers of YOU ALL GONNA DIE. We have cookies here.”

Okay, maybe that was a slight exaggeration but you get the idea.

The other thing I noticed right away was pretty severe. There is no music at all. In no matter what mode I played, absolutely no music. There were sounds of monsters dying and of towers firing, but no tunes. It made the game quite boring to be honest. Maybe some people wouldn’t mind the lack of melodies, but for me, I need music. Some kind of soundtrack. Anything, please. No? Sigh… fine. I’ll just play my own music. Now, what do I want to listen to? Pokemon? Nah. How about the classic Mighty Morphing Power Ranger’s theme song? Perfect. Guitar riff for the win.

So like I said, Domain Defense has several modes in single player. They are as follows: Normal, Tower Limit, Continious (I did not spell that wrong. That is actually how it is spelled in-game.), and Hard. Each mode has 40 waves. Okay, this typo is seriously bothering me. You all don’t mind if I just call it Continious from now on do you? You do? Well, tough. I’m the one writing this review so I get to decide what to put in it.  Anyway, why does Continuous mode have 40 waves? At least, according to the menu. Shouldn’t it be, oh I don’t know, continuous? But, like I said before, I haven’t beaten Normal mode yet and that is required to unlock the other modes. Oh, and there are four Normal maps in total. So, beat Normal four times, once on each map, to unlock the other modes. This game is not noob friendly.

Speaking of not noob friendly, even if you’ve never played a tower defense game before, this game kind of expects you to know what the hell you’re doing. Right from the start, there is no tutorial. I was just thrown into action and I saw the wave counter counting down. Well, crap. How do I build a tower? Oh it’s here? How do I place it? Click here? Something just popped up. Are these upgrades? Oh so just click this? What did I upgrade? Wait, I can’t click on this button anymore. And it changed colors. Guess I can’t use that. What’s this button do? Oh, it builds a different tower. Wait, I can’t build any more towers. Why not? Ah, I see you now, money sign with a big 0 next to it. So, how much does everything cost? Hmm… it’s hidden in the corner towards the bottom of the screen. This is hard to see. The font is gray and blends with the game itself. Oh god, the wave is coming.

This. Is. So. Slow. Little bunnies are just dying and I’m not doing anything. Oh look I got more money. Uh… I pushed something and now the game is at double speed. I push it again and triple speed. Sweet. Not as boring anymore. Come at me monsters!

Yeah, that pretty much sums up my experience from the very start. Sure, occasionally these little helpful tutorial boxes will pop up but honestly, half the time I have no idea what the hell they are talking about. Am I an idiot? Possibly. If that is the case, idiots should not play this game.

There are two multiplayer modes as well — Versus and Co-op. I was able to play both. It was a wonderful mess of, “I have no idea what I’m doing and I just won! Yay!”

Okay, I’ll be serious… let me rephrase that… I’ll try to be serious now. The Versus mode, where I played against AIs, was actually a lot of fun. One thing I noticed is that I had more options for my towers, but I had idea what they were until I put them down. Intriguing really. Also, the towers are a lot cheaper in “Versus”. You start off with a grid of your colors and the point is to place your towers to make a maze for the critters to follow. If you close it off, the system will open a path for the critters at your expense.

Waves in Versus mode are controlled by both your opponents and yourself. What you’re supposed to do is click on the monster icons in order to send that particular type of monster at your opponent. Only problem is I didn’t know how much they cost so I just spammed random monsters. Eventually, I found the price near the bottom of the screen. Apparently, you can increase money intake speed if you send monsters. Interesting concept. Eventually, it just becomes a mess of PUSH ALL THE BUTTONS!!! In the end, I won! Somehow, but no idea how.

Co-op was a concept I wish I could have explored more. Too bad I could not have AIs helping me. Instead, I was on my own. This was like playing single player mode on Normal but on uber-steroids. Let’s just say I did not last long.

For the controls, I’m going to be really honest. I hated them. I hated them with the passion of a thousand suns going supernova. No hotkeys. Just clicking. Click here. Click there. Click, click, clickity click. Oh, and you can hook up your controller to the game but it makes it worse. It really does. Also, the towers are so hard to tell which one you have highlighted, so you might upgrade the wrong one. I cannot count the number of times I swore under my breath. Here’s a hint, it was more than five… in one wave.

So yeah. Domain Defense CAN be fun if improvements are made. I would definitely suggest to Inclusion Studios that they should add in music and give the option to organize some hotkeys. A tutorial level would also be helpful. The waves all seemed to be the same and I’ll admit, I did fall asleep once playing this game. Yes, I fell asleep in the middle of the game. I don’t know why but it kind of snuck up on me. All in all, this game DOES have potential but at its current state, is truly lacking. The only saving grace for it is that the artwork is absolutely beautiful. Allow me to end this review with one final note: For the love of all that is gaming, add in some music!

**A review copy of Domain Defense was provided by Inclusion Studios.**

Graphics: Domain Defense has pretty simplistic graphics but they are beautifully drawn. The developers really put a lot of work into the art. I love the little details that are placed in each map. There is even a cow that just kind of walks around in one of the maps!

Gameplay: Oh man. I really hate to be mean, but the gameplay was confusing. I had to figure everything out on my own. There were no hot keys in place, nor could I make any. Bosses were tough but they only take away one health from you… which I found weird, but whatever.

Controls: Bad. If you use a mouse and keyboard, the only buttons you need are the left click button and the ESC key. That's it. Want to have some convenient way to switch between towers? Click on them. Miss? Click again. Still miss? Keep clicking. You'll get it eventually. Using a gaming controller is even worse. Don't bother.

Replay Value: There is definitely replay here. You’re probably going to fail a few times before you beat the normal mode. By the time you do, you probably won't want to play anymore.

Fun Factor: Well, I fell asleep once playing the game. So, eh? Kind of fun? I did have some fun in the multiplayer modes. If I had played with my friends, it would be a great party game to be honest. Try to annoy each other and trash talk in the versus mode, curse at the failures of your partners in co-op, all in good fun.

Final Rating: 4/10. Domain Defense is a visually stunning game but the lack of music, tutorials, and hotkeys/customizations made it extremely difficult to truly enjoy.

Have you ever wanted to grab a game by the code and manually delete it one line at a time in anger?

Golf Peaks could easily be mistaken for a skill-based miniature golfing game. At a glance, it appears the player must carefully guide a golf ball around a floating island course without falling off. However, Golf Peaks is actually a tile-based puzzle game that requires a sharp mind rather than golfing skill. A unique card-based movement...