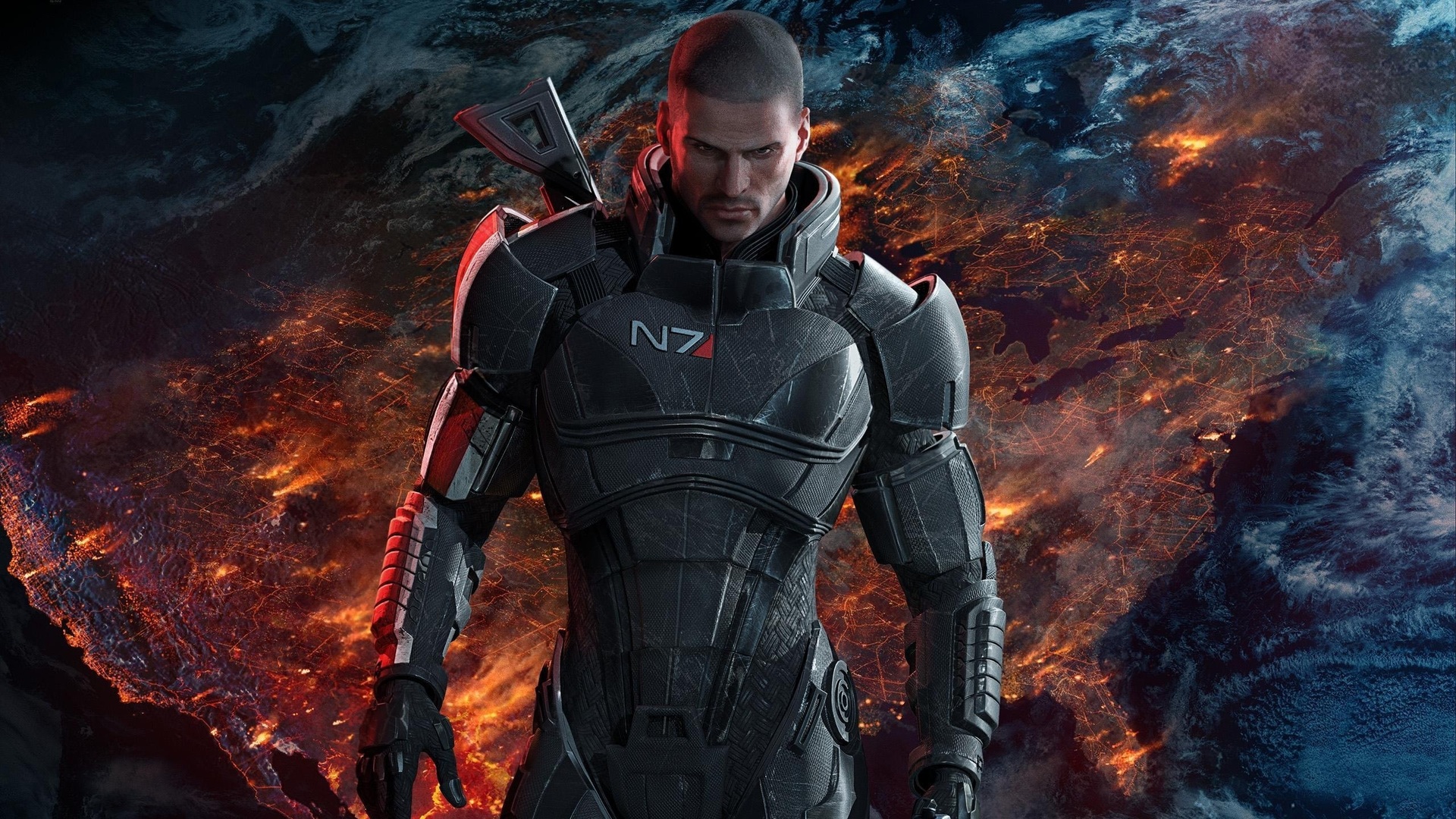 Looking for a science fiction third-person shooter that also has a strong role-playing element? Well, look no further than the critically acclaimed titles of the Mass Effect Trilogy. The Mass Effect series presents a space-opera setting with an entire universe at your fingertips. In the year 2183, the human race has found its place among the galactic community that they had discovered thirty-five years prior, and they’re looking ahead to many years of prosperity to come. However, the peace is being overshadowed by a hidden threat lurking in the outer edges of the Milky Way – The Reapers. The Mass Effect Trilogy tells a roller coaster of a tale over the course of three titles and immerses its audience unlike any other adventure.

You play as Commander Shepard, a member of the friendly Alliance’s top ranks, the N7 force. You are the Captain of the SSV Normandy SR-1, a vessel created to forge an alliance between the humans and Turians, who had met bitterly through the “First Contact War”. The Normandy is en route to Eden Prime, a human colony that has been attacked by a robotic race that have not been seen since 1895 – The Geth. However, unbeknownst to Shepard, they are a candidate for the galaxies top ranks known as the Spectres. What was initially expected to be an action game to explore the galaxy has now turned into something different – you’ll have to save it. Along the way, Shepard will recruit three alien fighters, one brilliant scientist, and two Alliance members that join in the first few missions. This team will form your core group, and relationships will be formed, both virtually and on your couch. Just this short summary demonstrates how complex and detailed the Mass Effect world truly is. Every single line of dialogue is masterfully crafted to reflect the thought and creativity that went into the series’ production.

The Mass Effect Trilogy shines brightest when giving players the chance to take in its thoughtfully designed world. The game itself plays as a third-person cover based shooter with a heavy emphasis on dialogue, exploration, and decision making. Mass Effect effectively manages to string together lavish battle sequences and frantic action with profound, personal moments that place the emphasis back on the individuals caught up in the conflict. Companions, a defining feature in all of BioWare’s games, consistently serve as a highlight of the series. Mass Effect also gives you the opportunity to form a relationship with three of your squad members. Romantic or not, each character has their own motivations and drives, and most come across as well rounded, delightful comrades. Mercifully so – over the course of the trilogy you will be spending countless hours fighting, arguing, and wooing these characters.

Maybe even more impressive than the relationships and attention to detail is the grand scope that the trilogy offers. This space opera engulfs the player by giving them dozens of planets to explore in systems located within Citadel space. The games include immersive storylines with user-made choices that will affect the entire journey, and decisions both large and small carrying over through each game. Right from the start you are made aware of the emphasis on decision making, as the game forces the player to make one of the toughest decisions found in all of gaming: choosing to save one life between two friends.

While it may not affect the grander story as a whole, the players ability to react to situations as Paragon (Good) and Renegade (Evil) is a pivotal point of the trilogy. It manages to add a lot of personality to each conflict. The choice between good and evil provides multiple outcomes for most quests, and plays a big part in how your character is perceived by your companions and the rest of the game world. Most importantly, this adds an incredible incentive to revisit the games after your first playthrough. You are able to re-experience the story anew, this time making the decisions and following the paths that you couldn’t the first time around.

When the original Mass Effect was released, it was seen as quite a departure for BioWare, who had been putting out traditional RPGs that often revolved around turn-based combat for close to twenty years. The game ended up laying a lot of groundwork for the rest of the series, while the weaker gameplay aspects, such as monotonous space exploration mini-games and awkward cover mechanics, would later be either phased out or improved upon. By the time Mass Effect 2 hit the market, the developers had cranked the game up to 11, ignoring some of the more common RPG tropes and instead focusing on lean, exciting heist-like action. They fine-tuned the combat, cut out a lot of the unnecessary fetch quests or flimsy dialogue trees, and created an incredible end-game where every decision and recruitment felt like it meant something. Mass Effect 3 had the difficult job of trying to tie together all of the loose ends from the past two entries, as well as upping the scale of conflict to massive proportions. Instead of merely commanding a squad of heroes, Commander Shepard began commanding entire planets. While many didn’t enjoy the linear endings to the game’s story, Mass Effect 3 still served as a true return to form for the series, and provided much needed closure with some final, meaningful interactions between companions from both previous titles.

Since the Mass Effect Trilogy can easily be viewed as a whole, many players experienced an immersive journey over the course of several years. While Commander Shepard starts out as a lowly captain at the onset of the first game, the stakes are continuously raised in each proceeding title until the player’s actions have irreconcilable effects on the outcome on all of civilization. As time progresses, you naturally become familiar with the characters and style of gameplay, integrating Mass Effect with your life. I find games that stick with you in this manner rise above the rest, and prove that there’s more to gaming than just reaching checkpoints. You essentially become Commander Shepard, and forget you’re even playing a game.

Altogether, the Mass Effect Trilogy is a phenomenal series on it’s first playthrough as well as on the second. The myriad of player choices adds an incredible level of replay value. That being said, the gameplay can get tedious if played too much in a short while. However, it is sure to capture your life and stay with you for years after completion. Be sure to keep at it until you have collected all three games, and beaten them several times to properly experience the whole Mass Effect story from beginning to end. Plus, with a new entry around the corner and the complete trilogy re-released in a box set for PC and last gen consoles, there’s never been a better time to play through the series if you missed it the first time around. Though it is somewhat of a let down by the bugs and glitches found within the Xbox 360 version, it mixes RPG and TPS elements together very well and ultimately defined a new genre of sci-fi.

Graphics: The Mass Effect Trilogy amazed fans by drastically revamping the visual presentation in each subsequent entry. It was able to consistently exceed the standard for graphics in the industry.

Gameplay: A flawless combination of both role-playing and third-person shooter elements brings a multidimensional journey to the table. Great dialogue effectively buffs the central storyline and steadily immerses each player into the Mass Effect universe.

Replay Value: The overwhelming selection of player choices keeps Mass Effect engaging past its initial run. Each decision you make has value, and will likely alter the storyline to some degree. The evolving aspect gives the series a top-notch value since the experience changes frequently.

Story: Shepard’s adventure is so detailed and interesting, it exceeds the stories of many featured films. An entire universe is literally created for the player’s experience, and never fails to put on a show.

Progression: The Mass Effect Trilogy focuses on the emotional progression of all its characters from beginning to end. Events impact personalities and decisions, psychologically altering the perspectives of everyone involved. Statistically, Mass Effect provides a variety of options to strengthen your character’s skill over the course of each game.

Final Rating: 9.5/10. One of the greatest science fiction sagas of all time.

The Mass Effect Trilogy is one of the greatest science fiction sagas of all time.

Cybarian: The Time Travelling Warrior opens with a screen that looks very similar to old arcade cabinet “Winners don’t use drugs” screens, only in this case it says “Winners don’t use saves”. There are no save slots or mid-level checkpoints in Cybarian. Once you exit the level, the game has no memory of your progress....

The Expendabros is an 8-bit arcade game based on the Expendables movie series. This free-to-play promotional game is extremely easy to understand, but difficult to master. It involves controlling a character from the films and blowing up your way to the checkpoint at the end of each level. Environments are fully destructible and the side-scrolling...