Don't Mess With My Memories... 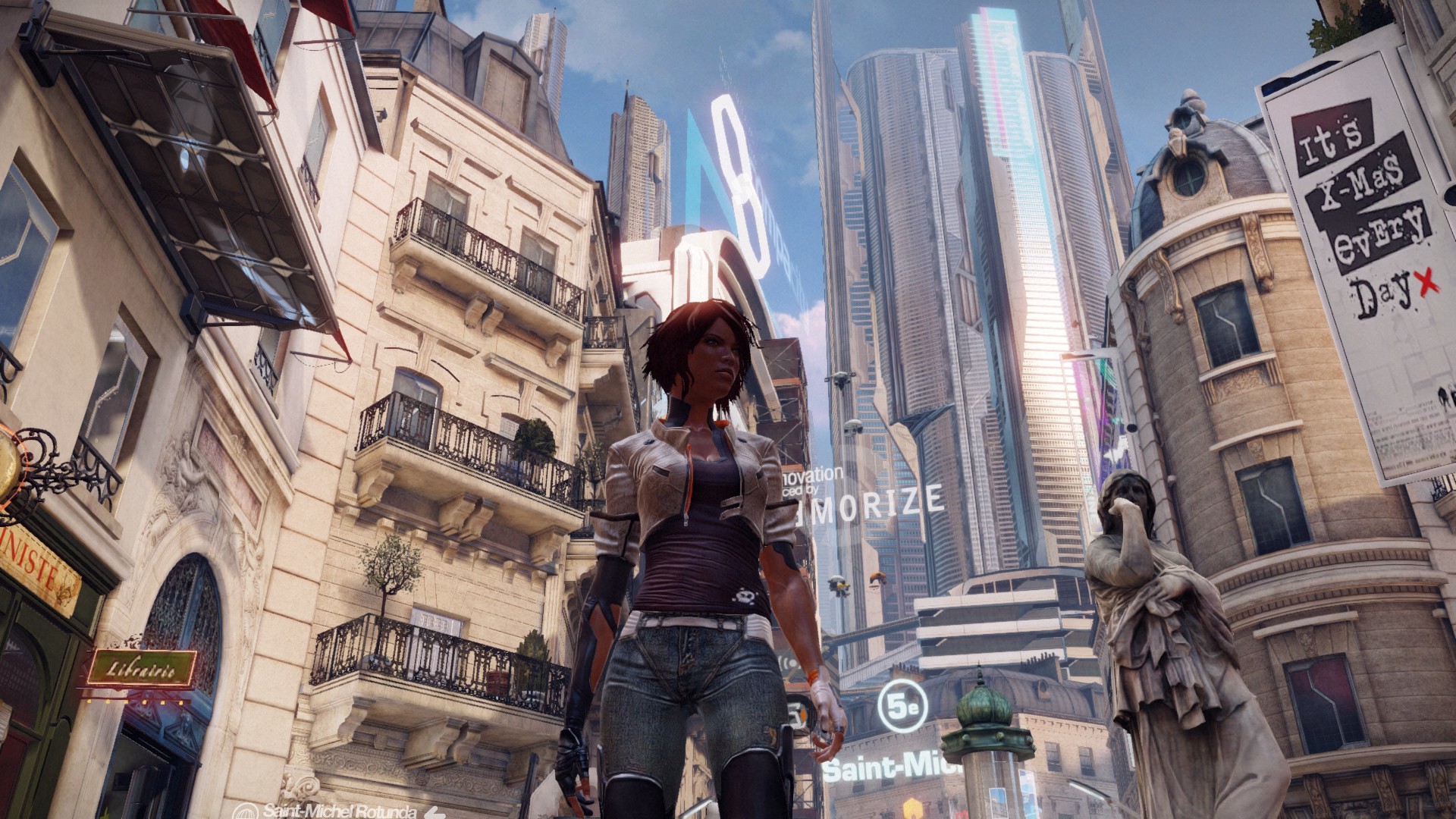 Memories are precious. Memories are unique. Nobody can have your memories and you can’t have anyone else’s. But, what if you could? Remember Me is a game developed by Dontnod Entertainment and published by Capcom. In this world, memories have become commodities and people can buy the memories of others or delete some of their own, for a price. There is always a price. Please, you think this kind of technology would be given freely? Nope. Greed conquers all. Anyway, the world of Remember Me is truly fascinating and absolutely beautiful. It makes you want to explore the city you’re in and see what kind of memories you can dig up. Unfortunately, this is not that type of game. It’s a shame but Remember Me just falls short of letting you be able to explore its world. You’re ever-growing curiosity will just have to be set aside. Forever. Excuse me a moment while I go wallow in anguish as I remember this unfortunate fact.

So this is the first game to be developed by Dontnod Entertainment. If the company sounds familiar to you, that’s because Capcom has published games like Mega Man and Resident Evil…wait a minute, I thought I was talking about Dontnod Entertainment? Apparently someone is messing with my memories.

Well, let me tell you our setting before I lose my mind completely. The year is 2084 and you find yourself in Neo Paris. Apparently, if you add the world “Neo” in front of something, it becomes “futuristic.” When you make it to the city, prepare to be blown away by the level of detail and graphics. The entire introduction is a commercial that practically sets the tone for this world. You play as Nilin, a “Memory Hunter”, in a fight against this futuristic and corrupted dystopian society. What’s a Memory Hunter? Exactly as the name implies; someone who hunts memories. I’m serious. It is an amazing concept that again, never gets fully explored.  In fact, the story itself, while it starts off strong, just kind of trudges along. There is so much potential to explore, but alas, it just feels lacking.

We start off with Nilin getting her memories painfully taken away. She wakes up with only the knowledge that her name is Nilin. Reminds me of the movie Total Recall in a way. Here, the tutorial jumps into place beautifully as they show you how to move around. You can try to explore but you’re forced to follow the path laid out for you. Everything is shiny but you know something is just off.

Seriously, the graphics are amazing here. One can truly tell that the developers put a lot of work into this. One of my favorite things are the pop up displays that show up. Things like “DO NOT ENTER. DRONES AT WORK.” will show up in closed off areas. Even shops, which you sadly will never be able to buy something from, will pop up with a full menu of what they sell and their prices. It’s those little things that you begin to appreciate and will really leave you wanting more. The city is truly beautiful but you only get to explore it briefly before you are sent back underground to the lovely sewers for pretty much the entire game. Even so, the graphics down there are still pretty phenomenal. 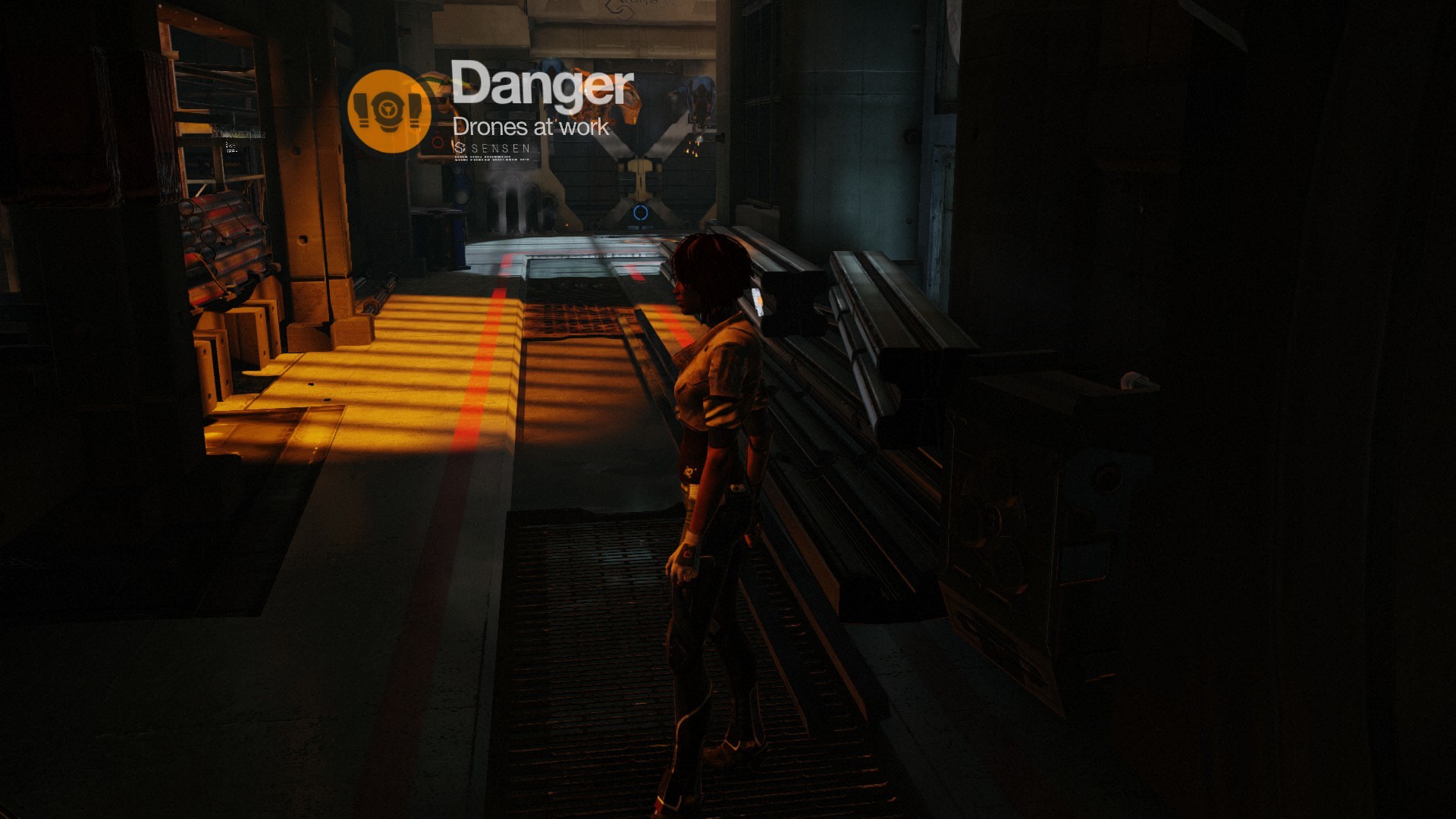 In order to figure out where to go, you have these handy dandy orange arrows that practically scream at you, “Hey Idiot, COME THIS WAY!” They were nice to have at first but then took away from the experience of trying to figure things out on your own. Although, the movement did kind of remind me of Uncharted or Assassin’s Creed with Nilin constantly climbing on things. 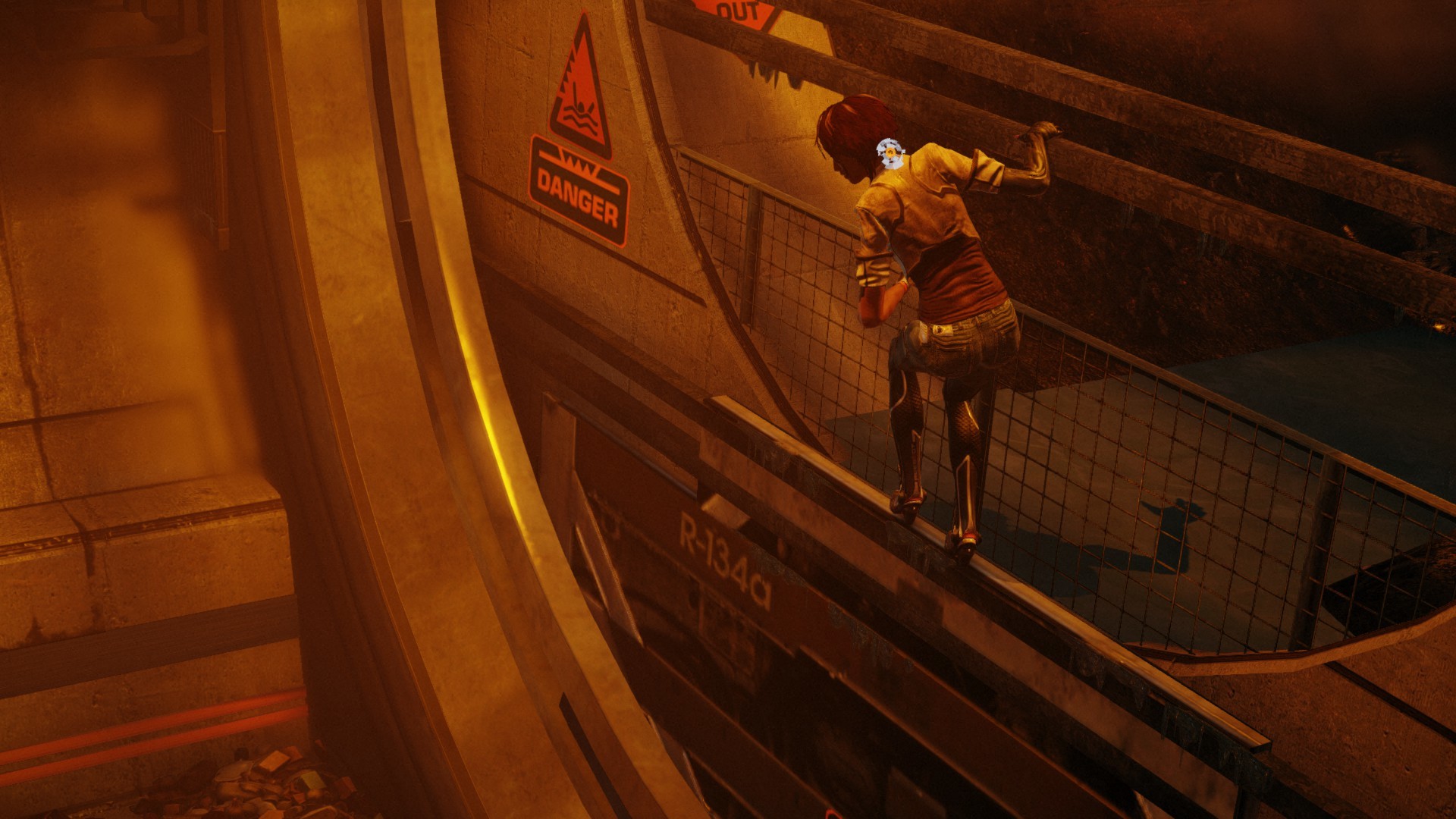 Combat is done with just a handful of buttons and is fairly straight forward. To be honest, I was at first thrilled by how simple it was and excited to learn that I could “customize” my combos. But, I soon found out that the customization was more along the works of, “You can choose what kind of attack you want to dish out”, rather than choosing how you want to make the combos. You really only need to know three buttons: punch, kick, and dodge. Oh, and against bosses, sometimes you get quick time events. Occasionally, a tutorial will pop up in the middle of battle and believe me, that is maddeningly annoying. What made me question the combat the most was how Nilin could barehanded punch through body armor AND punch through the metal in robots. She isn’t superhuman…I think. 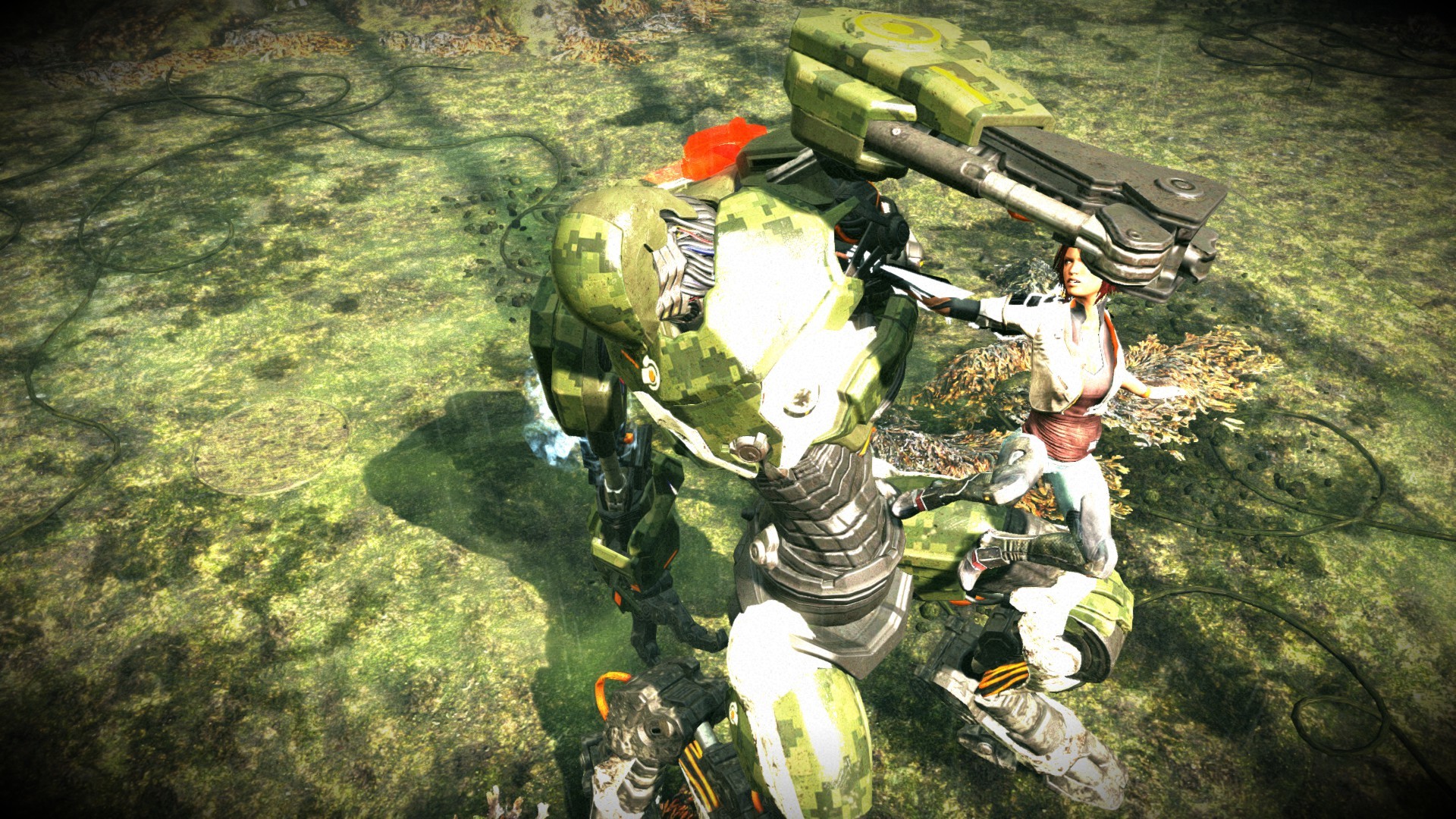 Seriously Nilin, how are you not breaking your hand beating this robot?! (Remember Me, Dontnod Entertainment)

As you progress through the story, Nilin will begin to steal certain memories from people or even enter their memories to manipulate them. This was where the game truly shines. I felt like God as I manipulated people’s memories to get the results I wanted. It was a lot of trial and error but that was actually part of the fun. If you mess up, you’ll see how the memory plays out and can simply just go further back into the memory to try again. The developers only mildly played around with this. We only get a few of these mini-games. It was definitely something new and I really, REALLY wanted more.

The characters in this game all have great voice actors. I never once stopped to think, “Hmmm…I could do better.” No, for every character I thought, “Yeah, that voice suits that guy/girl/thing”. I just wish that the characters were developed a bit more. You never get to truly know any of them except for Nilin. Actually, I take that back. You don’t really get to know Nilin too well either.

The soundtrack and music for Remember Me is a work of art. I honestly could spend hours listening to the music without getting tired of it. What’s hilarious to me is that Olivier Deriviere, the composer of the soundtrack, said the following: “Remember Me is not just a game; it’s a fully realized world that the creative team at Dontnod created from scratch. During my first contact [with the game], I was quite confused by so much information and I felt the music should reflect this confusion”. [Matt Helgeson (29 April 2013). “Music Spotlight: Remember Me Composer Olivier Deriviere.” Game Informer. Retrieved 14 May 2013.] I agree, Monsieur Deriviere, there was so much information in the game but none of it fully fleshed out. And your music did capture that confusion.

A word of advice for those who are going to play this game on PC — get a controller. Holy crap, the controls on the keyboard and mouse were awkward as hell. I struggled so hard on them before giving up and plugging in my controller. Playing with the controller made everything better. Camera movements were smoother and I could execute combat so much easier.

All in all, I actually really enjoyed playing Remember Me. The graphics were absolutely beautiful and the music fit each episode extremely well. So long as you are able to use a controller, you’ll find that the gameplay is fairly standard and not too awkward. However, that being said, I do wish the developers at Dontnod Entertainment had built up the world a bit more. They created a fascinating story and had phenomenal voice actors but it all just fails to make me feel…complete. I want more. There is so much potential here to truly explore the world of Remember Me and I do hope that they will eventually get a chance to further develop this world. Unfortunately, Capcom has decided to not pursue a sequel. Well, there is always a chance that someone else will pick up the rights of publications and let Dontnod Entertainment make a sequel. Also, they did say that they already have a story written out… Let’s hope nobody steals their memories.

Graphics: The game truly shines here. The background is definitely heavily focused on by Dontnod Entertainment. The buildings sparkle with delight and you can see some of the droplets from fountains. Of course, there are times when the graphics seem to fall short like when you look at the ground. But honestly, those things do not stand out as much as you would think.

Gameplay: Everything is very straightforward and you can definitely beat this game in a few sittings. It is done completely in third person and the characters tend to shine when they make their appearances.

Replay Value: Honestly, not much replay here unless you are a perfectionist and want to read every little journal that is hidden throughout the game and collect all the collectibles. Then, sure, there is pretty good replay value there.

Story: The plot started off interesting and strong but in the end, it was kind of bland. I actually found myself liking the characters far more than the story itself. Nilin is a likable character who isn’t just blindly following orders. She questions whether or not she should be doing certain things and will even sarcastically yell at enemy bosses. Many of the other characters have great voice actors but unfortunately, there was never a true villain that I absolutely hated nor was there a character that I truly loved besides Nilin. Everyone in the end can be pretty much forgotten.

Progression: From the start, the game feels rushed. It’s like they wanted to dive right into the action and there wasn’t really a plan moving forward. I know that there is a lot of potential through the journals that I found in-game but nothing is truly explored.

Final Rating: 6.5/10. A truly visually stunning game with an amazing soundtrack that had a lot of potential but falls short.

It’s like they wanted to dive right into the action and there wasn’t really a plan moving forward.

Imagine you’re guiding a group of people from “Point A” to “Point B” with a ton of lethal obstacles in-between, not knowing what lies ahead, all while gradually running out of food. The Oregon Trail immediately comes to mind, a difficult traveling simulator many of us are familiar with. In Tribal Pass you’re put into...