The Next Great eSport? 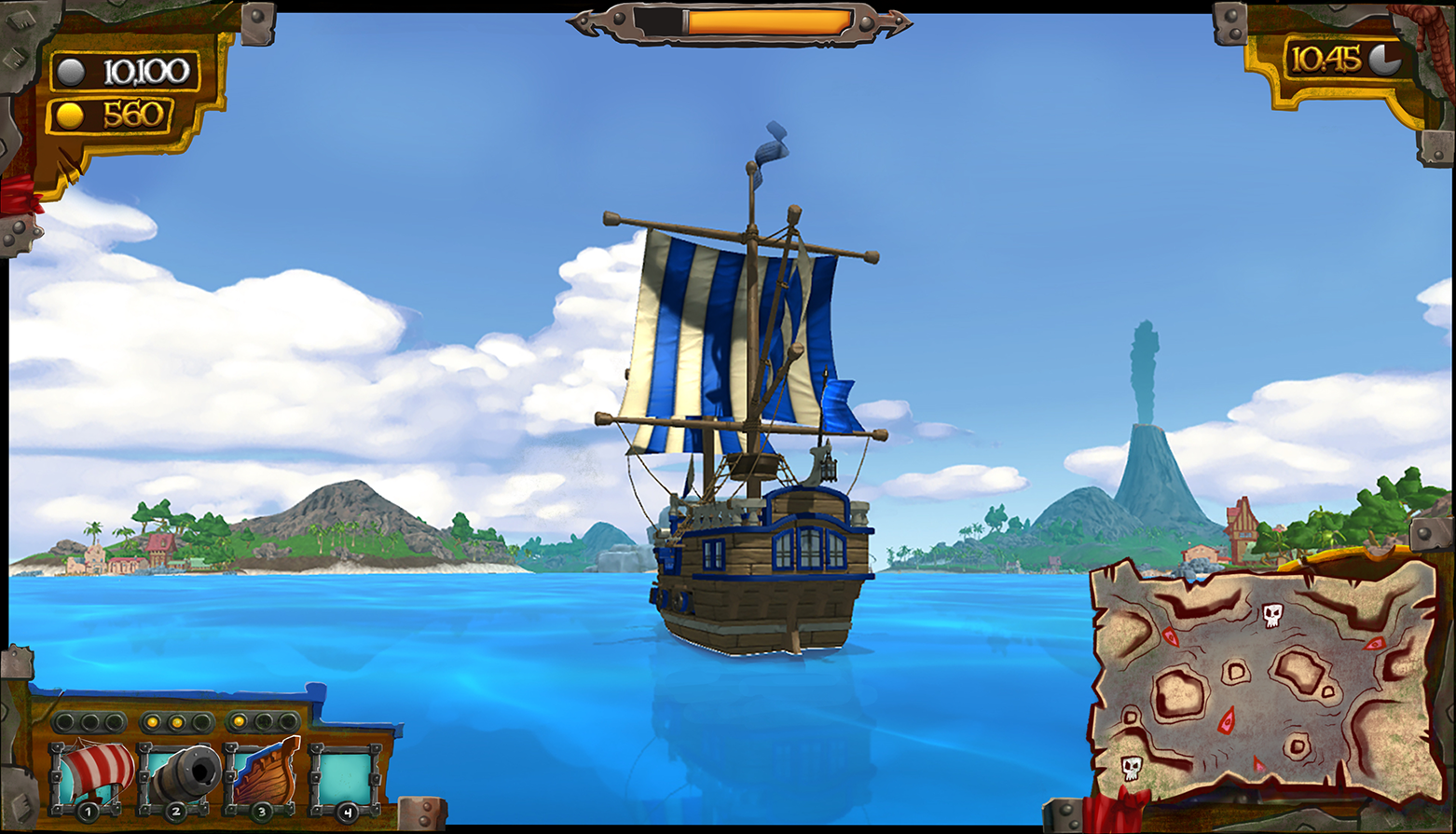 It’s difficult to find a naval warfare game these days that doesn’t mainly appeal to ship enthusiasts. Complex strategy titles like Wargame, Steel Ocean, and Atlantic Fleet immediately come to mind when thinking about the genre. Rarely are players offered a less “hardcore” adventure in which to sail the seven seas in heated conflict. Well, fear no more! Unearned Bounty is what we’ve been waiting for all these years. By implementing a pirate theme, cartoony atmosphere, and simple combat mechanics, Unearned Bounty is primed to be a crowd-pleaser for those looking to enjoy an upbeat pirate scuffle.

Unearned Bounty is a multiplayer sea battle game built around the framework of a MOBA. It’s being developed by Extrokold Games, and currently stands in alpha. Its general concept is simple — destroy other ships without wrecking your own. You can score points and resources for defeating player or AI controlled vessels. Resources are spent on hull, cannon, sails, or ability upgrades that will make your ship progressively stronger in different ways. Getting sunk will immediately remove these upgrades, which essentially forces you to start from scratch. With this system, those who amass kills become harder to conquer and are additionally tagged with increasing bounty, hence the game’s title.

Matches take place in a large, open ocean with different sized islands scattered around. Hitting a piece of land with enough momentum will sink your ship, so they actually serve as stationary obstacles. AI opponents serve as neutral enemies, as they do not attack. Rather, they sail around in a line, waiting to be ambushed by your weaponry. While attacking with cannons, aiming is key. To down a ship, you must first be perpendicular with your target. Then, accounting for both distance and momentum, you should fire at an angle. It may sound complicated, but combat is simple once you get used to it.

Free-for-All is the only game mode currently available in Unearned Bounty. Although fitting, it would be great to have other modes like “Versus” or “Teams” with different sized maps. Adding an element of teamwork would spur entire strategies and combo moves used to take down opponents. There is a huge opportunity for competitive gameplay here as well. The MOBA landscape contains very few games taking place on the open seas, making Unearned Bounty one of the first of its kind. Creating team-based options may propel Unearned Bounty into stardom in the future.

While jumping into FFA for the first time I was thoroughly confused. The reason? There is no tutorial of any kind in the game. Although key bindings can be found in the settings menu, and the basic game functions are straightforward, a quick tutorial or piece of instruction would be helpful. It took my friends and I around five minutes to understand the interface and feel comfortable with combat. A tutorial could easily shorten this learning time to a single minute.

Customization will be a major aspect of Unearned Bounty. Players can easily customize their ship with various designs that are provided. The number of styles to choose from amounts close to 200, not including country-based designs. I’m assuming players will have to purchase certain designs from a shop in the full game. The main issue is that only a portion of the available patterns drastically change the appearance of the sails. Meaning, most of them only change the color scheme of the sails, rather than add an image to them. Each ship as a small flag, however, which does indeed show an image that can be altered. A feature to allow players to rotate the ship would be a nice addition too. Without being about to rotate your vessel, it is difficult to see the rear flag, which is essentially the centerpiece of the whole customization menu.

Rich graphics, music, and artwork surround you at every turn in the world of Unearned Bounty. The game truly draws players with its adventurous tone, as it’s easy to ignore what’s missing when surrounded by a vibrant atmosphere. Immediately upon booting up Unearned Bounty, you’re blasted with a pirate tune filled with energy. Although quite a large chunk of the game is still in development, the soundtrack and art fill in the gaps.

The most imperative topic is whether or not Unearned Bounty is fun. Well, it is. Based on the reactions of my friends, we all had a great time playing together. With its radiating energy, Unearned Bounty is able to bring out the competitive edge found in everyone. Now, all it needs to do is take advantage of that aspect. Adding a chat option, whether it be voice or text, would definitely increase competitiveness and interaction. Improving the mini-map by making it easier to track opponents would have the same result. At this point, Unearned Bounty has a great framework that simply needs to be reinforced. If it adds a couple new features, the game could easily be a hit.

**A review copy of Unearned Bounty was provided by Extrokold Games.**

Heavily inspired by Stardew Valley and similar role-playing exploration games, Forager is a colorful adventure through the pixelated frontier. As you gather and craft resources, the world of Forager gradually expands and offers new challenges. While there aren’t any defined goals specified in the game, plenty of sandbox-style fun can be had as you explore...