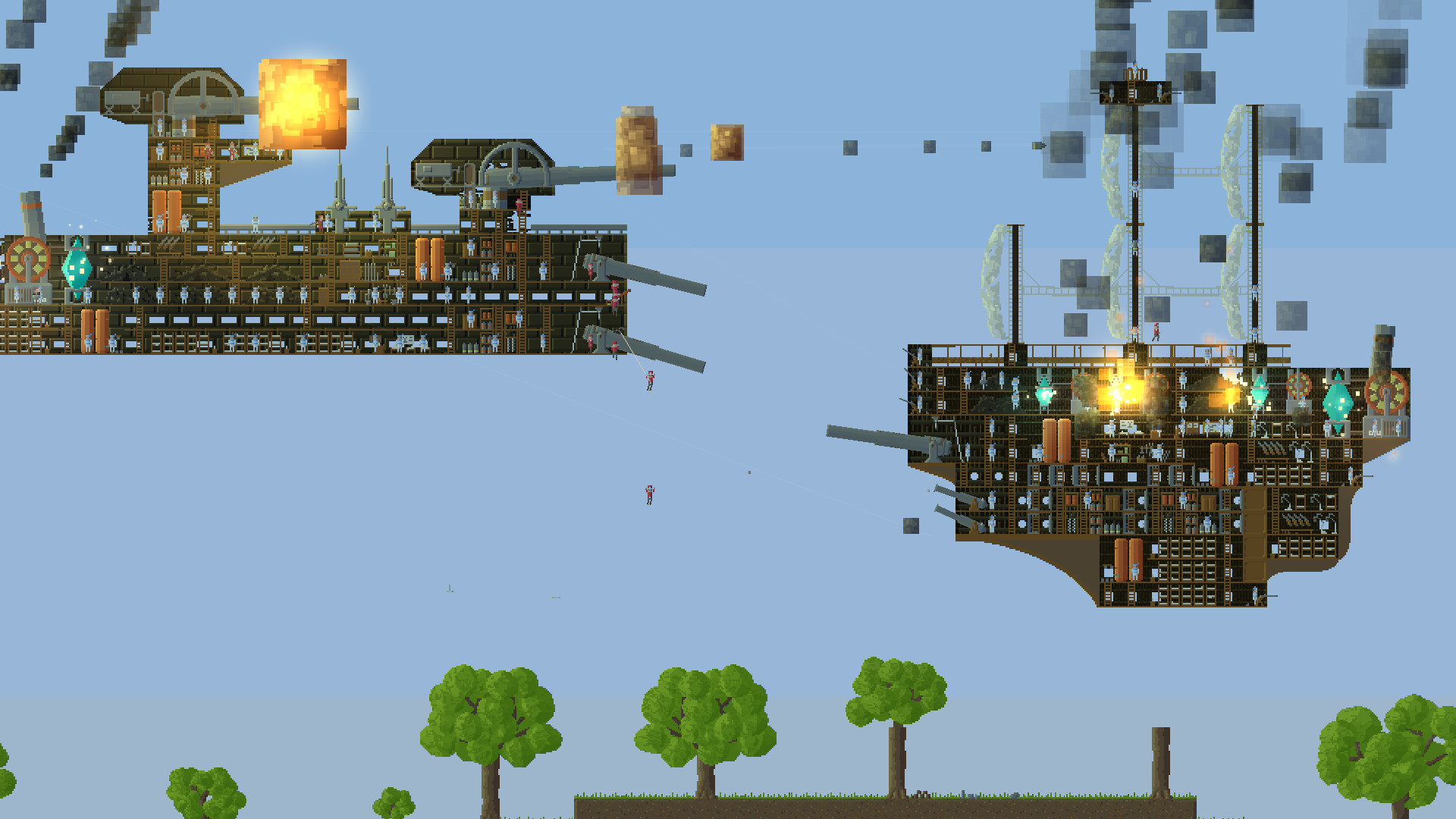 Fascinated with the grandeur of war, humanity has always tried to mimic global conquest from the safety of our homes. From paper-and-pencil battlefields to massive video game landscapes, history shows us an exciting evolution of war simulations. Airships: Conquer the Skies is the budget version of one’s dream war game with near-limitless possibilities and pixelated graphics, harkening back to the days of hand-drawn combat. By constructing your squadrons, navigating the battlefield, and managing a complex economic landscape, players will experience a near-perfect sandbox in Airships: Conquer the Skies.

The level of strategy in this game is quite deep. At the lowest level, you are required to build each member of your fleet from scratch. The tutorial does a great job of forcing you to learn the intricacies of each ship without feeling overbearing. Some core components like ammo storage and a cockpit are required for your ship to function, but the real fun begins once those are all taken care of. Then structural components, weapons, armor, and decorations can be fitted, all within your limited budget of course. The tutorial smoothly guides you through the game’s fundamentals and covers everything you need to know to succeed in combat. Ready-made ship templates are made available later on, but they don’t hold the same uniqueness and potential of custom-built ones. There are also aesthetic options for those who really want to add some flare to their designs.

Real-time action takes place within individual battles, bringing your freshly built airships to life. The level of destruction in this battle perspective is satisfying, as pixelated debris flies everywhere when ships and fortresses get bombarded. Each airship has several moving parts and battles feel lifelike even though the game’s graphics are 8-bit. Maneuvering around the map is done point-and-click style but you can still crash into objects and send various commands to troops. Faced with either an opposing ground fortress or airship fleet depending on the scenario, the goal is always to annihilate every last trace of enemy life. Sometimes a side will surrender but most battles end in explosions and one’s honorable defeat.

It’s difficult to tell whether or not you’re winning in a battle though. There’s no straightforward indication that your engine is about to go out or propellers are almost busted. I would have liked to see health statistics for each individual component of the ship, just for some better awareness. If you know you’re about to lose flying capability it’s always a good idea to kamikaze into the enemy base. Moreover, there’s a lot of activity within your ship that the player has little control over. For an even more immersive experience, the option to guide crew members around the ship would add some depth.

Conquest mode is where Airships: Conquer the Skies really shines. You could sink hours into a single playthrough of this mode, expanding your empire across a huge map through hundreds of battles. This is your grand-scale world domination mode, similar to Galactic Conquest from the original Star Wars Battlefront II for those familiar. Players must consider location, research, politics, economy, defensive strongholds, attacker fleets, and strategic timing to succeed. Doing so is quite difficult considering enemy factions also progress at the same rate as yourself. My tactic (which often failed) was to pour money into advanced research to build a single, powerful ship. However, the enemy had the same idea from a defensive standpoint and I was surprised to find my mega-ship was no match for their newly developed super-fortress. With scenarios like this, the game is able to make conquest mode feel responsive and animated.

With a great soundtrack to top everything else off, Airships: Conquer the Skies offers a fun war experience like no other. It’s certainly not the most realistic military strategy game but there’s a lot of fun to be had here. I’d like to see a formal multiplayer mode in the future too, currently it’s just private matches. Imagine a team campaign complete with the same strategy and creativity present in conquest mode — that would be amazing. For now, players will have to stick with the game’s single-player experience which I highly recommend.

Gameplay: Strategic gameplay makes for a engaging experience like no other.

Multiplayer: Multiplayer has the potential to be amazing, but currently only meets the bare minimum.

Fun Factor: The process of designing your airships and watching them come to life in battle is as fun as you can get.

Sound: The game's soundtrack might have been looping, but it's so complimentary to combat that I didn't notice.

Customization: From functional components to decorative options, there's no shortage of customization when it comes to building airships.

Final Rating: 8/10. Airships: Conquer the Skies offers a fun war experience, highlighted by its conquest mode. It’s certainly not the most realistic military strategy game but there’s a lot of fun to be had here.

This is the budget version of one’s dream war game, harkening back to the days of hand-drawn combat zones with limitless possibilities.

Ever dreamed of becoming an intergalactic tycoon and raking in space cash like never before? If so, Zero Sum Future gives you the opportunity to face off against others with the same aspirations. You’ll have to ditch your combat cap for a more diplomatic one and build a corporate empire across planets, keeping an eye...