Adventure and strategy await in a fantasy world. 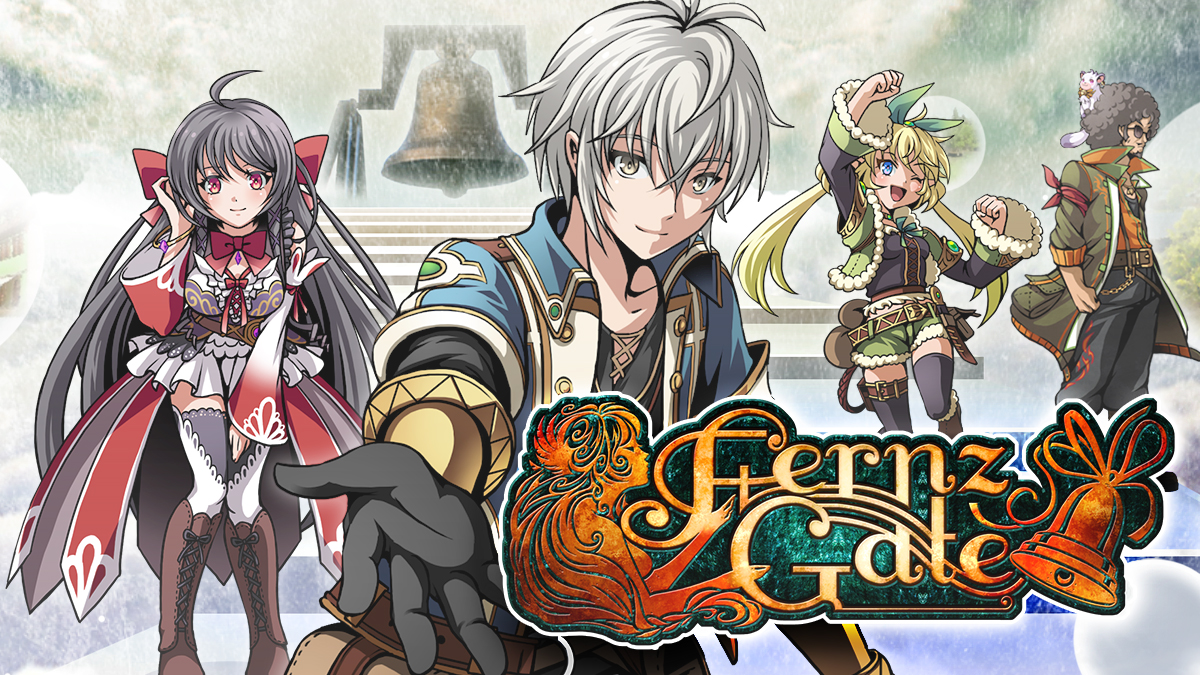 Fernz Gate is a JRPG developed by Exe-Create Inc. and published by KEMCO. The game was originally released in 2016 for iOS and Android. In August 2018, releases were expanded to include the Xbox One, Nintendo Switch, PS4, PS Vita, and PC. Prices vary among platforms, and there are “freemium” versions advertised for iOS and Android on KEMCO’s website, which are different downloads from the premium (paid) versions. For this review, I played on my computer but later downloaded the “freemium” version on my Android phone. I had a lot of fun playing this game. It lends itself to pass time in public, but a dedicated playthrough is also enjoyable.

Fernz Gate takes place in a world called Fernland, which is a fantasy land that acts as a crossroads. People from all other existing worlds often find themselves lost, ending up in Fernland. These “outworlders” live alongside locals of Fernland in peace until they can be sent back home by the Goddess of Fernland. However, the region has been taken over by one outworlder called the Overlord, who has stolen the Goddess’s power and taken over rule with his monsters. Because the Goddess no longer has power, she cannot bring home any outworlders, effectively trapping them in Fernland. You begin the game as a character named Alex, who finds himself lost in Fernland. His home world is much similar to ours and he’s just a high school student. As Alex explores the region, he meets new faces and learns how to fight. With his party of friends, Alex seeks to help Fernland against the Overlord and eventually return home.

JRPGs are a favorite genre of mine, and Fernz Gate did not disappoint. It brings nostalgia with its storyline, presentation and combat, staying true to the classics. The game’s environment and characters are drawn with detailed pixel art, giving a 16-bit feel. Music is fleshed out with a traditional orchestra. Gameplay is a mix of exploration and turn-based combat. Navigation is top-down, and randomly encountered enemies in dungeons cut to a separate battlefield. What separates this game from the rest are world-building features that create a unique experience.

Combat is most affected by the game’s unique features. A party of different characters can be formed to fight together in battle, but Fernz Gate features a main/sub fighting strategy. Each party member can fight on their own, rotating with each turn, or characters can be assigned in pairs for each turn. This main/sub pair allows one character to support the other with buffs or add an additional attack. Different character pairings result in different overall buffs, but a generic buff can also be performed for each action. When fighting in pairs, the main’s action is selected first and the sub’s action selected second, but these actions are carried out on the enemy in reverse order (sub action, then main action). Individual characters can go without a sub, but buddies (pets) are also available to assist as subs. Their base attacks are weaker than characters’, but still can provide ample support for a main attack. Two buddies are provided in the first dungeon to the party of four characters, allowing for early-game main/sub strategy. Additional buddies are obtained from buddy rings.

Combat positioning is also available in the form of vanguard/rearguard. Characters or pairs can choose where to stand on the battlefield. The standard positioning gives 100% attack power and vulnerability, and is called vanguard. The rearguard positioning places characters/pairs further away from the enemy, and attack power and vulnerability is reduced to 60%. These features bring strategy to an otherwise simple game. Who should be paired together, and who will be the main and sub? Which characters need incoming enemy damage reduced to 60%, at the cost of their own power? Luckily, these are presets that can be changed in a menu. Positioning and pairing does not need to be reselected for each battle, but can still be changed at will.

Battle encounters can get tedious, so there are two actions that streamline combat: repeat and auto. Selecting the “repeat” button will allow a character to repeat their last used skill, and selecting “auto” allows the entire battle to be automated. In auto battle mode, character attacks and skills are selected by the game. These are based off presets that are chosen in a menu.

Combat skills also have unique features. One special type of skill is a “shared skill.” Characters that are not party members have the opportunity to share their knowledge, allowing your party to learn their unique skill. This skill is shared by both the main and sub in combat. Another type of skill is a “unison skill”. When certain characters are paired together, the sub will have the opportunity to learn a skill that complements the main’s selected skill. Once this unison skill is selected, both the main and sub will perform their unison skill action at the same time.

Additional non-combat features of the game are also vast. Curios inside dungeons allow the party to set monster level, encounter and drop rate, or teleport back to the entrance of a dungeon. A “secret house” has six rooms that you can set to perform specific functions, such as growing plants or housing buddies to earn money. Animas are cute animals that allow remote communication. Free time in the game is characterized with optional team-building dialogue, where friendship and skill level of party members can be progressed. The in-game shop allows purchase of special items and a gacha mode that allows players to try their luck, roll, and earn a random varied item.

I found Fernz Gate to be extremely refreshing. Combat and story are the most enjoyable aspects of the game. There is nothing noteworthy in gameplay mechanics, but the abilities available and the depth of action allow for a fun experience. There is little at fault with the PC version. My only complaint is that when playing in windowed mode, clicking out of the window pauses the music, and re-entering starts the track over. This is forgiven when playing the mobile version, as it’d be terrible design to have one app’s music playing over everything else.

As mentioned in the beginning of this article, I played Fernz Gate on both PC and Android. The version I tested on my Android phone was the “freemium” version. There is not much difference between the paid and free versions, or among platforms. The game is definitely still playable and enjoyable in its free state. The major difference between the two versions is the usage of gems, which is a separate currency system used to play the gacha (called Jar Breakers) and unlock various features. For those who are unfamiliar with gacha, it is much similar to a loot box. Gacha is named for the Japanese gashapon (vending machines that dispense toy capsules). The item that is received from the gacha is random, and the gamble that comes with playing the gacha allows the publisher and game developers to make additional money. The paid version comes with a large amount of gems to spend. In addition, some features that require gems to unlock come already unlocked in the paid version.

Platform differences are also minor. I found gameplay mechanics to be much easier on my Android as there is a feature to toggle an onscreen joystick for movement. PC and Android both feature a point-and-click movement method, but I have never been a fan of this design and actually shy away from games that don’t feature alternate movement options. PC, in lieu of the joystick, allows arrow key movement, but otherwise keyboard usage is rare.

Overall, I greatly enjoyed Fernz Gate. Of course, being a fan of JRPGs, this game was right in my genre. Your mileage may vary, but I definitely recommend downloading the “freemium” version for iOS and Android to play anywhere. Despite all the cross-platforming, this game was originally developed for mobile, and I feel that’s where it works best. The free version is not much different from the paid version, so I would not recommend buying the game unless you wish to play on a specific platform. Whether you are a fan of JPRGs or not, this game is definitely something to pick up.

Fernz Gate has multiple downloads for multiple platforms, but I recommend the free version on iOS/Android or the paid version on Steam. Visit the official website here.

Fun Factor: This game is good to pass time on mobile, but can also be a fun playthrough on other platforms.

Gameplay: Controls are simple, and the fun of Fernz Gate comes from its world and battle strategy.

Graphics: Pixel graphics are detailed and give an old school 16-bit feel.

Story: The story is a generic fantasy, but not boring.

Originality: Fernz Gate is a nostalgia trip without being unoriginal.

Final Rating: 8/10. Fernz Gate is a detailed adventure strategy game perfect for players of all genres. It features a unique cast and story, but its best feature is its immersive combat.

Fernz Gate is enjoyable no matter what platform it is played on, but first and foremost it is a mobile game.

LifeAfter is a zombie survival game for mobile devices, created by Chinese developer NetEase. It originally released late 2018 in China and the English translated version launched on February 27th, 2019. LifeAfter is free for iOS and Android, set in a post-apocalyptic world where a zombie outbreak has taken over and you have to survive!...