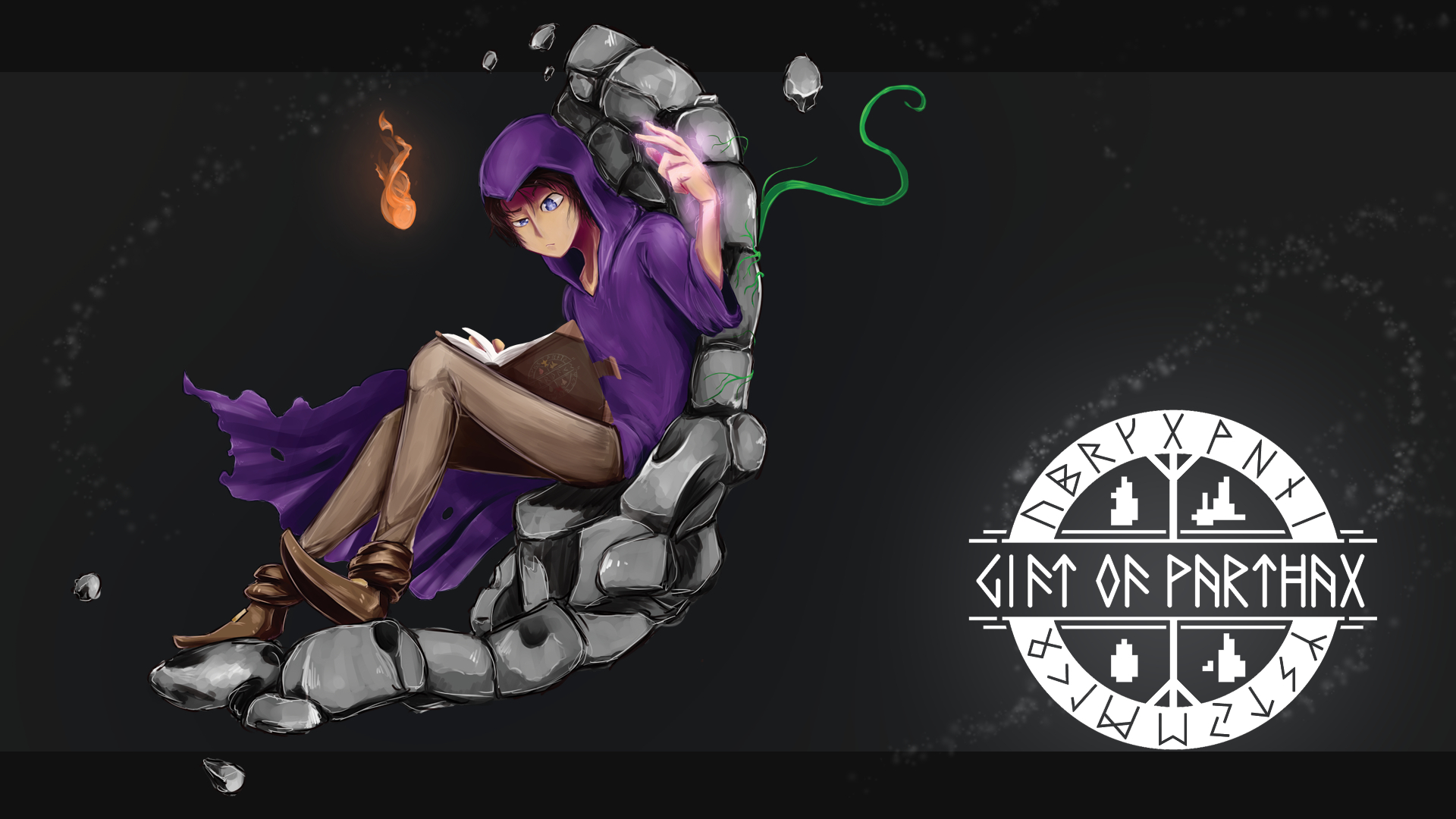 Gift of Parthax is a top-down spell based arena shooter and a very competent one at that. The presentation is fairly simple, owing to the low-resolution pixel art and simple premise, but it is executed well. Music conveys a sense of fast-paced mysticism which is completely appropriate to the gameplay. There is a story, and while it does string the arena fights together it is not particularly engaging.

What the game lacks in depth, it completely nails on execution. Gameplay consists of separate arena fights of escalating difficulty with the player learning new spells and unlocking new passive abilities as they progress. The first chapter of the game is very simple and this may turn off some players. Circle strafing around the arena while holding the left mouse button is the dominant strategy and can carry you very far — even into later chapters. That said, there is a noticeable difficulty spike in the second chapter onward although this was welcome. It would seem the developers intend for players to get accustomed to Gift of Parthax at their own pace and even retry earlier fights if they need to practice or just get some more gold for upgrades.

Said upgrades are also pretty basic. Passive damage and minor statistical boosts to the properties of your spells are available as well as personal upgrades. The spells themselves are simple to use but the real skill comes in combining all these aspects together. Basic projectiles, traps, slow moving projectiles, and summons round out your roster of abilities and you’ll find that each one gets its fair amount of use as the different arena fights throw various compositions of enemies at the player.

Here is where the graphics of the game shine. Though low in detail, each enemy is given a noticeable silhouette and color palette, allowing the player to quickly identify pertinent threats and target what they feel is highest on the list. Sound design serves its purpose here as well with the player’s spells and enemy attacks given distinct sound cues, and the soundtrack mixed at a decent volume so as not to overwhelm the senses. Overall, a lot of simple ingredients are mixed well and provide an extremely fair difficulty curve throughout all parts of Gift of Parthax.

Enemy mechanics follow the design philosophy with the rest of the game. A single enemy is simple on its own, but there is great variety in both the types and composition of enemy waves. There are melee, ranged, spell casting, and charging variants just to name a few, and based on how a specific wave is arranged with multiple enemy types, the experience of combat changes dramatically. Combat really shines in boss fights, which are just as varied and can be compared to the bullet hell genre. They are fast and hectic but never out of the player’s control.

It bears mentioning the remarkable similarities between Gift of Parthax and Wizard of Legend. The latter is a bit more refined and retails higher as a result, but Gift is by no means any less fun. It’s an extremely decent game that fairly executes what it sets out to do. Though Gift of Parthax does not have anything particularly unique, what it does offer is high quality.

Graphics: Simplistic, but they get the job done. With a multitude of enemies on screen, the art style makes sure you don't lose track of the action.

Gameplay: Starts out basic but ramps up and lets the player experiment with loadouts, becoming both fast-paced and strategic.

Progression: Although there are a lot of upgrades and spells to use, they don't offer that much utility in the grand scheme of things. Basic spells and upgrades can get the job done most of the time.

Replay Value: The arena challenges are custom-made, and it can be fun to come back to an old challenge with a new set of tools.

Story: Not much to engage the player, and serves more as a loose tie-in for the protagonist's motivation.

Final Rating: 6.5/10. An extremely decent game that fairly executes what it sets out to do. Though it does not have anything particularly unique, what it does offer is high quality.

A lot of simple ingredients are mixed well and provide an extremely fair difficulty curve throughout all parts of the game.

It’s difficult to find a naval warfare game these days that doesn’t mainly appeal to ship enthusiasts. Complex strategy titles like Wargame, Steel Ocean, and Atlantic Fleet immediately come to mind when thinking about the genre. Rarely are players offered a less “hardcore” adventure in which to sail the seven seas in heated conflict. Well,...