Putt your way to victory! 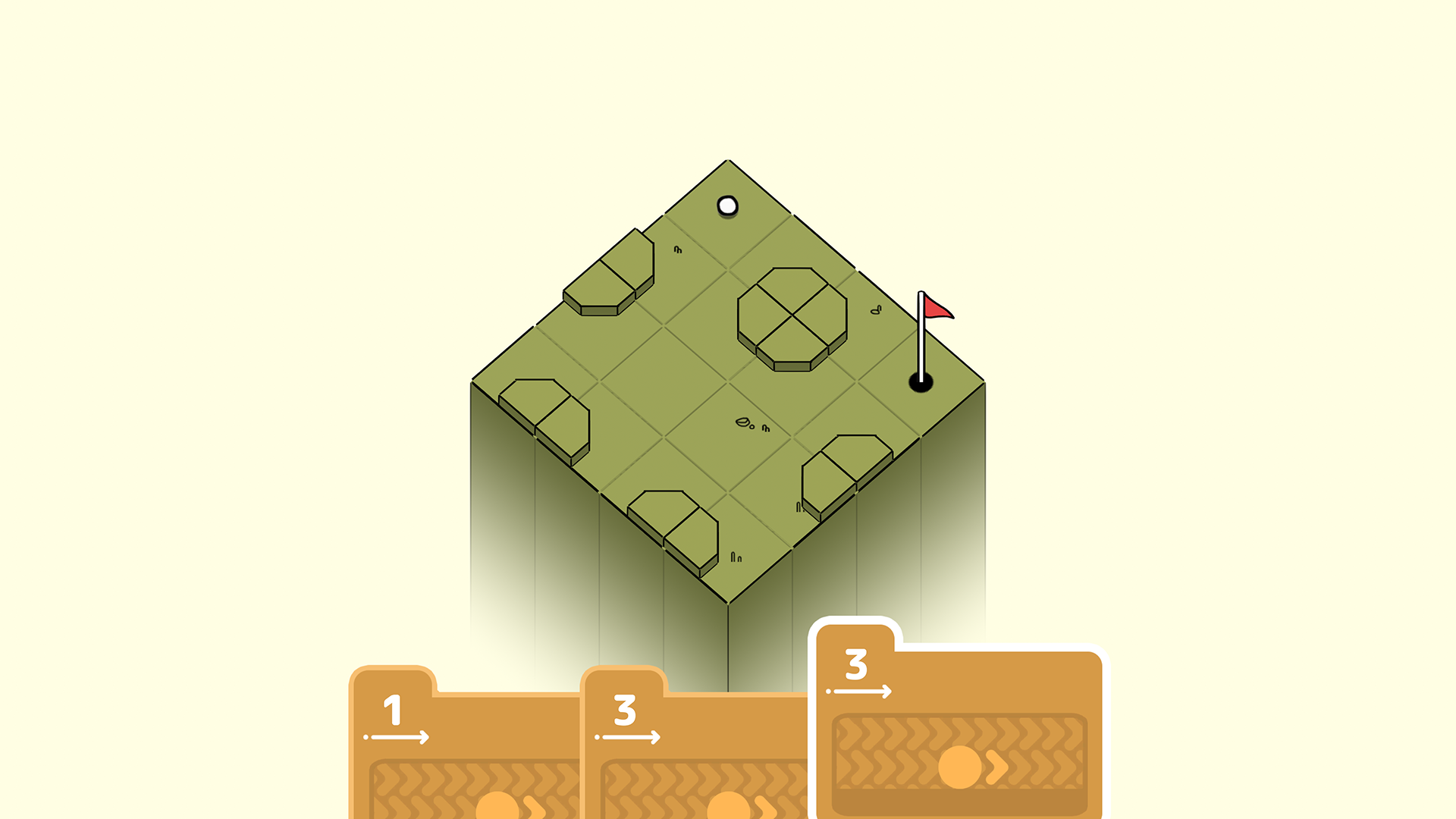 Golf Peaks could easily be mistaken for a skill-based miniature golfing game. At a glance, it appears the player must carefully guide a golf ball around a floating island course without falling off. However, Golf Peaks is actually a tile-based puzzle game that requires a sharp mind rather than golfing skill. A unique card-based movement system allows for navigation around each level and the golf atmosphere serves as a theme for the puzzle gameplay. In other words, golfing experience and coordination are not required to play Golf Peaks.

The objective in each stage is to simply traverse an arrangement of tiles and reach a hole. Movement cards must be activated in a certain order to successfully complete each puzzle. A card tells you how many tiles can be traveled per turn. While you can only putt in a straight line, ramps and bumpers allow for multi-directional movement. Losing your ball or simply playing the wrong combination of cards will happen incredibly often, but the game offers undo and restart buttons. Golf Peaks isn’t meant to be frustrating at all and can be enjoyed by anyone, as you can experiment as needed with each puzzle.

The game consists of 72 levels divided into six worlds. Each individual world highlights a new puzzle mechanic that carries through to later levels such as sand, water, or jump pads. This creates a nice difficulty curve that doesn’t feel too rushed, making for a casual puzzle experience. Each world includes three extra-challenging stages, and there’s a much higher chance of getting stumped on these. Still, the challenge levels are reasonable — just a bit more complex. It should be noted there’s only one solution per level, so solving a puzzle usually doesn’t happen by accident. Completing Golf Peaks will take around two hours, but expect to see future level packs added.

The hand-drawn, sketchbook art style in the game is very appealing. Everything looks very clean, geometric, and minimal. The puzzles themselves take place on floating islands in a serene atmosphere, and it doesn’t get much better than this for a puzzle game. You’ll travel through different environments, but I especially enjoyed the classic golfing green. An ambient soundtrack accompanies your golfing adventures. The dreamlike world of Golf Peaks is relaxing and the puzzle gameplay doesn’t feel intrusive.

Golf Peaks has just released for iOS and I’m not at all surprised. In fact, it’s more surprising that it’s been released on PC first. The game holds up on a large screen just fine though. I didn’t have many expectations going into Golf Peaks, and I was greeted with a pleasant puzzle game for all ages. As more content is sure to be added soon enough, there’s no reason why you shouldn’t give Golf Peaks a try.

Gameplay: The puzzle gameplay could easily be swapped for skill-based golfing, but appeals to a larger audience without any ramifications.

Replay Value: The only drawback to Golf Peaks is the lack of content, but it's off to a great start with 72 stages.

Progression: The game's difficulty curve is so gradual, you won't even notice the levels getting more complex.

Final Rating: 9/10. I didn’t have many expectations going into Golf Peaks, and I was greeted with a pleasant puzzle game for all ages. As more content is sure to be added soon enough, there’s no reason why you shouldn’t give Golf Peaks a try.

The dreamlike world of Golf Peaks is relaxing and the puzzle gameplay doesn’t feel intrusive.