Weapons are your friend. 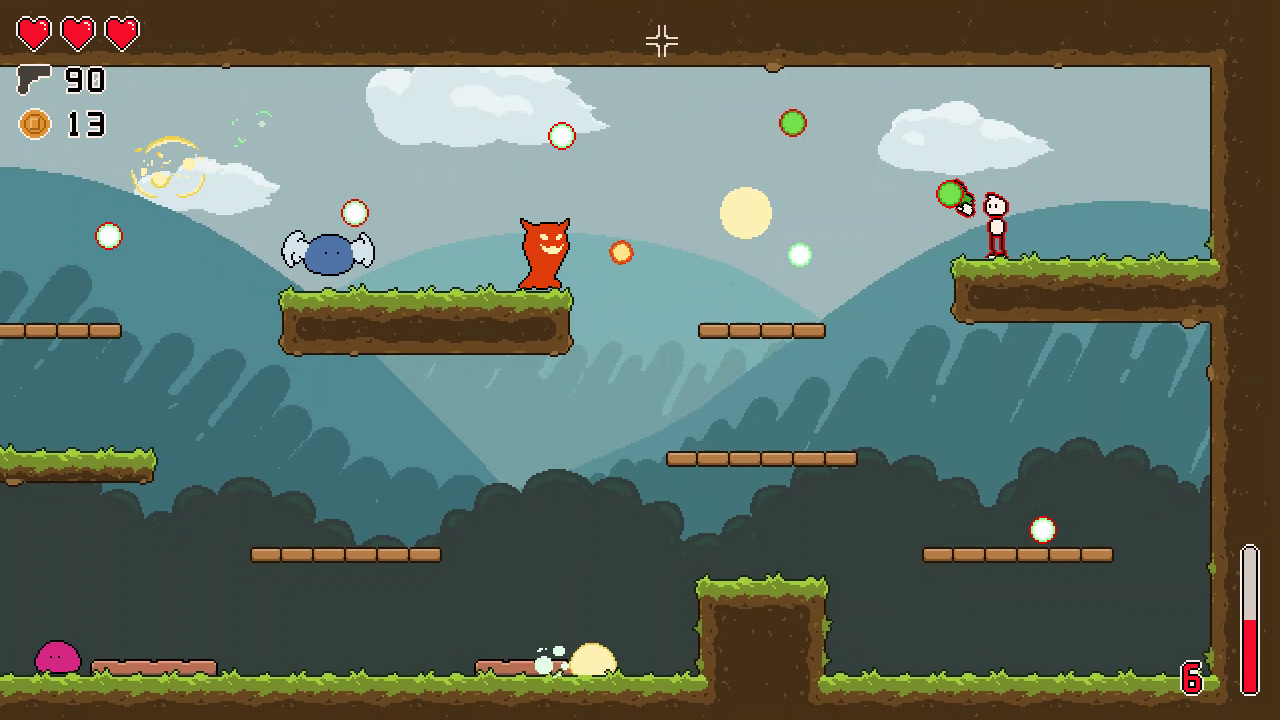 Heavily inspired by action-platformer Super Crate Box, Gunkid 99 throws you in a tightly-enclosed arena with a ton of enemies and many weapons at your disposal. You’ll tend to take a defensive stance against your opponents as projectiles swarm the screen. The main gameplay mechanic is a constantly shifting weapon rotation, where your task is to pick up as many weapons as possible before inevitably dying. This concept was the highlight of Super Crate Box, and the same holds true for Gunkid 99. The game has a Steam release planned for early 2019 and can currently be purchased on Itch.io, as it’s still in the final stages of development.

Gunkid 99 stays true to the arcade genre by being a challenging and endless platformer. As with many arcade titles, it entices the player by having simple controls and objectives, but proves to be a real challenge as the difficulty quickly ramps up. You’ll notice that Gunkid 99 looks relatively bare-bones. Sprites aren’t visually interesting, the UI is quite plain, the titular Gunkid is a stick figure, and backgrounds are static. Yet, none of these features really matter. Everything in Gunkid 99 revolves around exciting gameplay, which doesn’t need fancy graphics. Heck, we’ve seen countless games with nothing but a paddle and bouncing pixel draw loads of eager players. The game’s UI could be made more appealing without a drastic overhaul though — it doesn’t look like completely finalized at the time of this writing.

As already mentioned, the player’s goal is to pick up weapons to earn points. Doing so will allow you to equip the weapon until you grab the next one. A timer of around 15 seconds between pickups keeps gameplay fast-paced. Before starting a level, you’re allowed to set a loadout of three weapons to have in battle. Your decision can be somewhat strategic, but you’re only as strong as your weakest weapon. I learned this the hard way by choosing a rotating fireball shield instead of a firearm. It wasn’t worth the close-knit defense, as I wasn’t able to clear out enemies fast enough. Weapon balancing isn’t the greatest, where some are clearly weaker than others. One gun that requires you to bounce the bullets off walls is absolutely terrible. Though, this only becomes a problem when the game forces you to use its predetermined and underpowered loadout during the first run of each stage.

You can also equip power-ups along with your weapons. It’s clear the most crucial one is extra health. The game’s difficulty mainly stems from having to survive for quite a long while, and only being able to take three hits before it’s game over. Increasing your hearts to four or five proves to be extremely helpful in squeezing out a few more moments of action. None of the power-ups are blatantly overpowered, but additional hearts are must-haves. Also, collecting weapons isn’t just about getting high scores — you need a certain amount of cumulative points to unlock new stages.

Most people should be able to enjoy Gunkid 99 without being extremely skilled at platforming games. With enough power-ups and practice, you’ll definitely get better at surviving in its arenas. There are some final touches that need to be done before Gunkid 99 is ready for release, but I expect it’ll be a successful indie game on Steam. It’s not a groundbreaking experience that’ll blow you away, but delivers fun and frantic 2D platforming.

Gerty is a twin-stick shooter being developed by Spawn Point OSK. It is a four-player, top-down, co-op shooter that puts players in an alien underground mine. The game is still in early access, with a full release set for late 2019. Gerty offers four-player local co-op, a wide range of difficulty settings, a large collection...