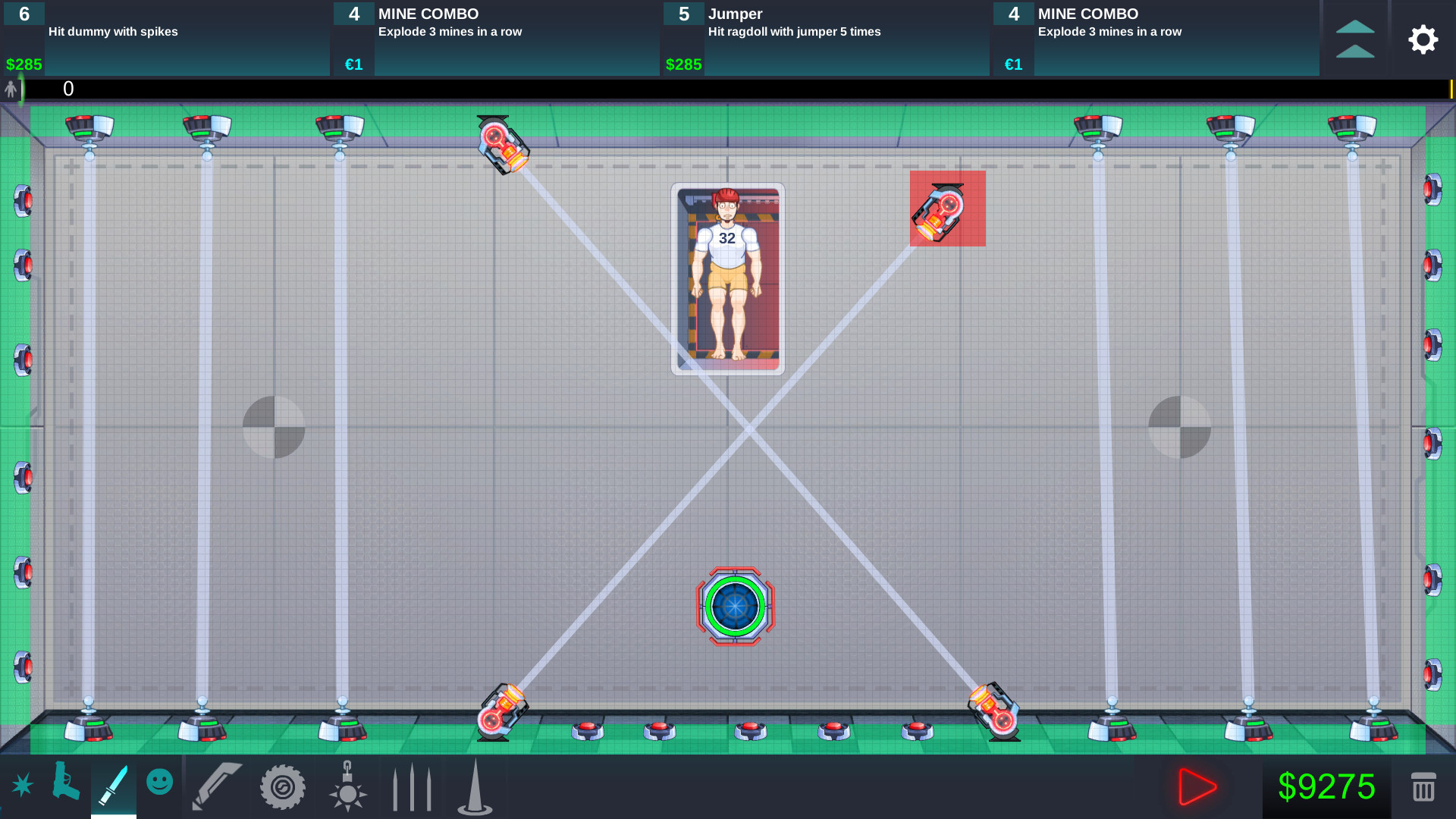 Every once in a while a person needs to blow off some steam after a long day’s work. Happy Room is the perfect stress reliever for these types of situations with its violent, sandbox-style gameplay. Developed by Mana Potion Studios, the game provides an infinite queue of ragdoll test dummies to dismember, torture, and experiment with in a small room. Obviously, there is nothing happy about the “Happy Room” itself other than the sick enjoyment experienced by the user, but that’s all that really matters isn’t it?

Although severely beating a dummy for hours on end is great, it can undoubtedly get repetitive after some time. Fortunately, Happy Room provides a load of missions ranging from dealing out raw damage to solving complex physics puzzles. The majority of missions require the usage of various tools to accomplish very specific goals. You may need to land a certain combo, make the dummy fly along a specific trajectory, or get the weapons themselves to interact with each other. The solutions to these are not obvious, so it takes both creativity and luck to be triumphant. Also, missions must be completed in order, which makes it frustrating if you are completely stuck on one. As the game is not very popular, there is currently a lack of comprehensive walkthroughs for these dilemmas. Though with enough trial and error, I personally found myself able to fight through even the most ridiculously tough objectives.

Happy Room doesn’t hold your hand and provides little besides the tools you need to succeed. Even the interface isn’t explained properly, so some of the early challenges might be somewhat confusing. The fifth mission simply asks to clear the screen, but it took me over ten minutes to realize there’s actually a button they want you to use. In general, there isn’t too much to figure out, which provides some freedom on how to play. Focusing on completing missions is also optional, and messing around with the dummy is what many will prefer instead. Doing so is as simple as placing some tools down and watching the chaos ensue. The weapons are all entertaining, but most of them are different types of guns. Acid, flame, bullet, plasma, and laser rifles are all basically the same thing with different animations. The real fun comes in the form of monsters, piranhas, saws, and explosives! Each dummy has no idea what’s in store for him and it’s never pretty.

Two modes are available, “Story” and “Sandbox”, where the first has limits on what you can build, while the second does not. Story mode contains all the missions along with a price system where each weapon you place has a cost. Also, all weapons have upgrades that must be purchased. Cash is earned by completing missions and base weapons are unlocked by setting new total damage milestones, unlocking Sandbox Mode once every weapon is obtained. I found the secret trick to max out total damage is to use the teleporter item. I won’t say any more, but just know you need to place several in some arrangement! Using this method as soon as the teleporter is available will unlock Sandbox Mode early on, giving you more freedom to experiment.

I enjoyed how the missions give some direction to Happy Room. Many other “beat the dummy” games don’t have achievements or any guidance. Happy Room excels simply because it has more substance to offer than the rest. It’s really more of a puzzle game than a sandbox, taking advantage of realistic physics to make the player think. Once I began my quest to complete every mission, I expended a ton of brain power in the process. Now, this isn’t to say throwing the dummy around isn’t fun in itself. Happy Room provides slow motion and blood to let you enjoy the violence even more.

Happy Room isn’t much more than a mobile game in the end, but that’s perfectly fine. I can’t think of anything that could have been changed, other than a few more weapons and an improved mission system. Like I mentioned earlier, it’s just a good way to wind down for a few hours once in a while with some classic violence. With a game this simple there isn’t much to discuss, as you essentially know exactly what you’re getting. With that, I definitely recommend Happy Room for mature players looking for a fun time.

Gameplay: Happy Room provides a ton of destructive tools to mess around with and various types of missions, which tend to include physics puzzles.

Progression: Accumulating wealth and upgrading your weapons adds to the fun.

Fun Factor: Beating up a test dummy is classic fun, first becoming popular in the era of Flash games.

Customization: Once you unlock Sandbox Mode, customizing your room’s setup becomes limitless. Until then, you’ll have to work within the boundaries of your budget.

Final Rating: 8.5/10. Happy Room is the perfect stress reliever with its classic violence. It’s really more of a puzzle game than a sandbox, taking advantage of realistic physics to make the player think.

There is nothing happy about the “Happy Room” other than the player’s sick enjoyment.

When I first entered the world of Kick Ass Commandos, all I wanted to see were some explosions. Well, I can definitively say my wish came true. Before the Kick Ass Commandos experience I’d never seen so many explosions at once in my life. It seems like action games are continuously one-upping each other for...

By Avian Michel, 3 years ago
Choice of Games Horror Indie

Death Collector is an interactive fantasy novel written by Jordan Reyne and published by Choice of Games. It plays out similarly to a visual novel but is completely text-based with no CGs, sprites, or music. Death Collector looks very much like an e-book but features player choices that determine the ending, making it an interactive...