Written by Rilogator on September 2nd, 2018. 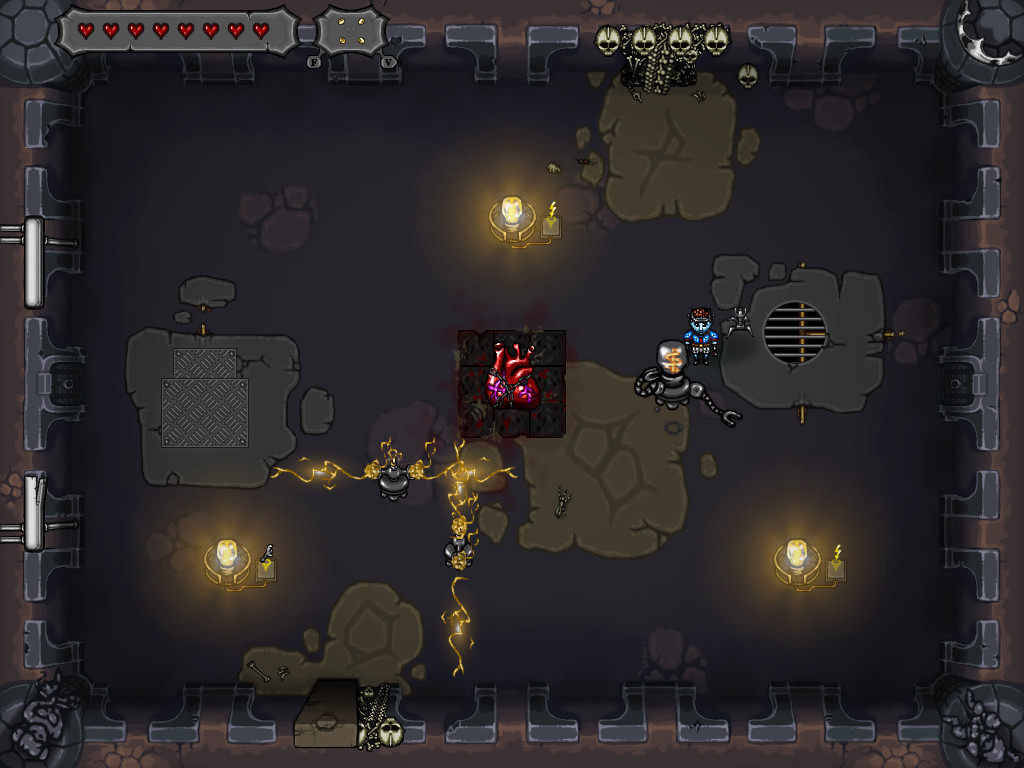 The overall presentation of In Your Realm is, initially, pretty engaging. There is a haunted dream sort of feel that sets in from the opening cinematic as music draws you in and captions explain the game’s pretense. It’s described that the player character is going to enter their own mind and battle whatever they find. There is a heavy Binding of Isaac influence that is present from the very start, in both being top-down, psychological horror “adventures”, although In Your Realm does have some problems.

This is unnecessarily complicated. Being able to swing on either side of the player sprite doesn’t really matter when you can simply turn your character to the side, which is instantaneous. Blocking is ineffective against most attacks since enemies attack rather quickly and without tells.

When you start actually playing the game, you’ll notice dungeons have a very Legend of Zelda type structure. You simply enter a room and there are enemies to kill inside. Player movement is atrociously slow when enemies are nearby though. Initially they won’t all notice you, but they can detect you from pretty far away. They all have to be killed before you can move on to the next room, which makes slowly walking up to them a painful process. Other rooms have the opposite problem where you just get swarmed instantly, with blocking being of no help.

The game’s graphics showcase a variety of enemies and environments, but they lack detail. It can be said, however, that this resulting style adds to the dream-like atmosphere of In Your Realm. There is a point in the game’s favor in enemy variety though. There are many different kinds of enemies to be found, and lot of them have unique attack patterns or mechanics to circumvent. It actually seems that this level of complexity is not tailored to the kind of basic movement and attacks your character has. Along with enemy variety, dungeon maps themselves have a lot of little visual details and small touches that bring them to life.

There are a lot other frustrations. The in-game menus for character inventory and stats are not very good at explaining themselves. Certain room mechanics are unclear as to how they function. The player has an aggravatingly small health pool. Stats gained from leveling up seem to barely have any effect if at all. Rooms are relatively massive given the player’s slow move speed. This is a very slow-paced and difficult game which is not a bad thing on its own. However, there seems to be very little to redeem these negative qualities. Combat is unsatisfying and comes down to luck most of the time. The initial theme, exploring a world of your own nightmares, is interesting but not enough to carry the monotonous gameplay.

Sound: Music is rather delightful and sets the mood appropriately.

Gameplay: Confusing and lacking in depth.

Controls: Don't seem to match the style of game on offer.

Developer Support: The game is getting weekly updates, which shows potential for the future.

Final Rating: 3/10. A lot of good ideas and passion went into this game. I believe its shortcomings come from a lack of understanding of game design, not lack of technical skill. I see this game as a stepping stone along a path to a genuinely unique experience in the future.

The initial theme, exploring a world of your own nightmares, is interesting but not enough to carry the monotonous gameplay.

Cybarian: The Time Travelling Warrior opens with a screen that looks very similar to old arcade cabinet “Winners don’t use drugs” screens, only in this case it says “Winners don’t use saves”. There are no save slots or mid-level checkpoints in Cybarian. Once you exit the level, the game has no memory of your progress....