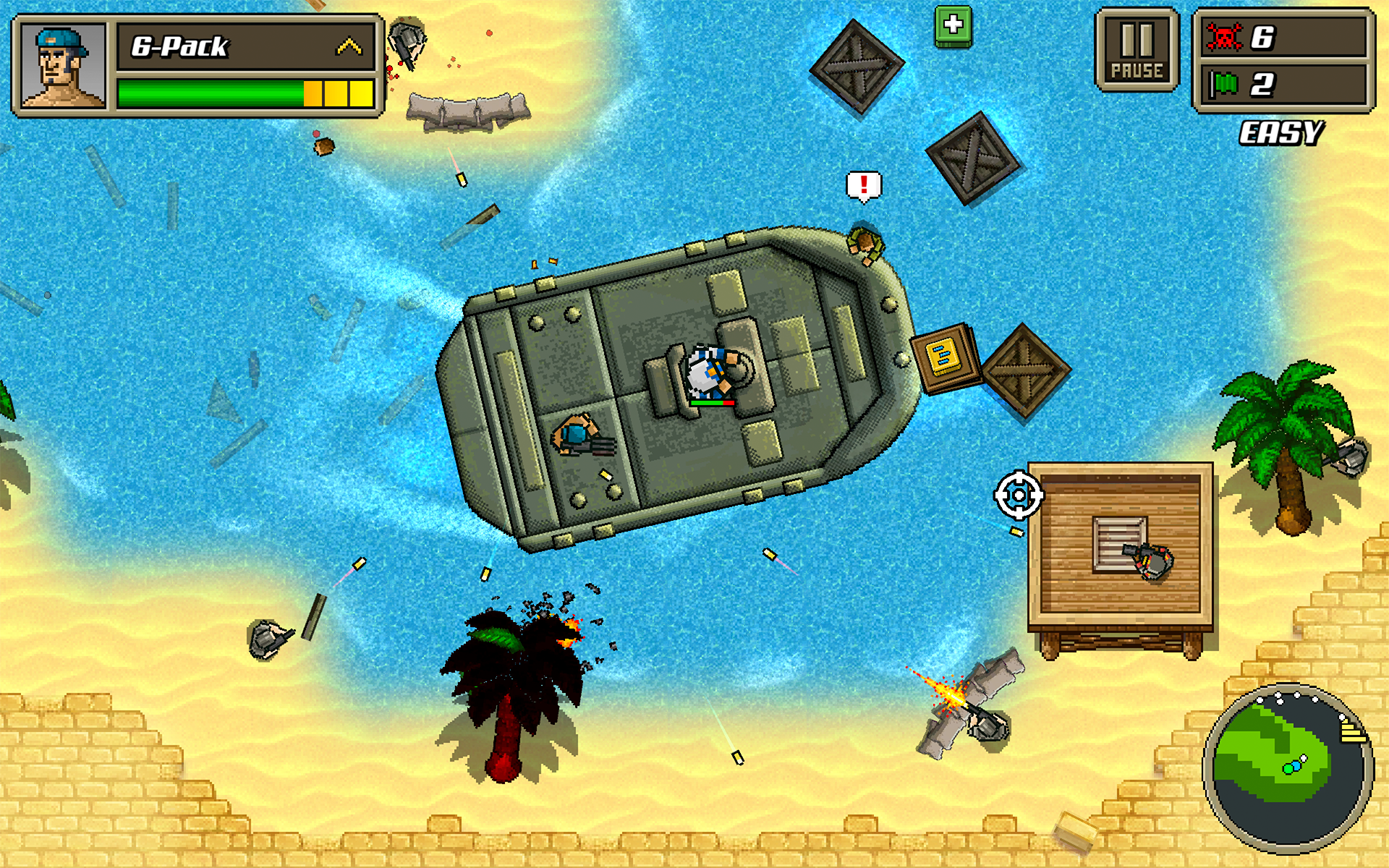 When I first entered the world of Kick Ass Commandos, all I wanted to see were some explosions. Well, I can definitively say my wish came true. Before the Kick Ass Commandos experience I’d never seen so many explosions at once in my life. It seems like action games are continuously one-upping each other for the most simultaneous explosions, and this game takes the cake. To emphasize this point, there is a level where the mission is to specifically destroy every last explosive in a bomb factory. Although pure destruction forms the basis of Kick Ass Commandos, there is much more under the surface of its appealing, proven concept.

Upon booting up Kick Ass Commandos, you are instantly met with the blood-pumping sound of heavy metal blasting out guitar riffs. It really gets you into the intended mood and is reminiscent of Doom’s classic soundtrack. It’s very loud though, so I found myself having to turn down the volume after a couple minutes. As a fan of the genre, I can say that metal was the right choice. However, there is one particular track that goes overboard and would be better suited for a boss battle rather than looping through. It’s accurate to say that this game wants to get in your face from the get-go. Everything about the menu from its colors to music screams for attention and prepares you for the action to come.

In terms of gameplay, Kick Ass Commandos is an basic bullet hell shooter with several linear missions lined up to play. Power-ups and a variety of weapons are available for pickup in battle and cannot be pre-equipped beforehand. I love how there are no limits on ammo, which allows you to go crazy without having to worry about your bullet count. Graphics are pixelated and display tons of blood and gore — think Contra if it was made in the past decade. Now when I say there’s a lot of blood, you’d better believe it. For example, when your character dies, his head always flies off in a huge fountain of guts. Not to mention the whole thing happens in slow motion! Also, the game’s title contains the word “commandos” for a reason. A sort of side objective in each level is to rescue your fellow commandos, and they will immediately join your side as a reward. As your squad grows, a swarm mechanic presents itself where you cannot directly control teammates, but they will still fight for you until they unavoidably perish.

Assassination, escort, and “kill everyone” missions appear frequently, while bonus levels pop up from time to time. The special levels provide a change of pace and may involve controlling a vehicle or surviving waves of enemies. The escort missions posed some trouble for me, as you need to keep your target alive but cannot directly control him. Luckily, this small flaw isn’t too much of a problem since you can strategically snipe your enemies from afar. There are also boss stages, which simply contain a somewhat stronger enemy to face at the end of the round. You won’t need to figure out a pattern or anything like that to kill him, although a puzzle-like element does present itself through the use of keycards to progress through many levels. The color-coded keycards felt like a direct reference to Doom’s repeated use of the same utility. Gameplay has little originality as a whole but it’s excusable due to the slight variations from level to level.

Progression exists, but it’s pretty weak. A variety of characters can be unlocked as you progress through the levels, each with their own upgrade tree containing health, armor, damage, fire-rate, and healing tracks. Upgrade points are awarded upon a level-up, which can be achieved through simply playing the game. Special characters are pre-unlocked, but there are only three to choose from — Santa, Donald Trump, and Vladimir Putin. I feel like the whole progression system is just an illusion, as there’s no real reason to play the game after you beat every level. Sticking with one single character is the best option with my personal pick being the shirtless Putin, and upgrades don’t make much of a difference on the battlefield. If the commandos have one weakness, this is it right here.

The best part about Kick Ass Commandos is its top-notch sense of humor. From beginning to end, the game understands the action genre and its tropes. It doesn’t directly reference anything too often, but surely knows where it stands in the world of shoot ‘em up media. My personal favorite funnies are having to rescue Colonel 6-Pack, Vladimir Putin as a playable character, Chuck Norris-type jokes, fighting Yetis, and watching a group of enemies drop soap in the shower. Jokes littered throughout the game keep it fresh and although I never laughed out loud, the sense of constant entertainment is undeniable. Also, theme changes occur rapidly, where you’ll go from fighting jungle alligators in one scene to killing hordes of zombies in another.

Kick Ass Commandos has basic gameplay, but the fun manifests itself in other areas such as humor, action, and theming. I found myself having a blast from beginning to end with this short, action-packed title. Nothing beats running around, obliterating everything in sight after a long day’s work. Although not something I’ll remember a year from now, the Kick Ass Commandos enlistment does its job perfectly. So, get out there and kick some ass!

Fun Factor: All the easter eggs and action-genre references keep the game lighthearted and a blast to play.

Graphics: Pixelated graphics are detailed enough where all the blood and explosions look great.

Replay Value: Once you beat the game, there isn’t much point in coming back to it, so enjoy the ride while it lasts.

Final Rating: 9/10. Kick Ass Commandos has basic gameplay, but the fun manifests itself in other areas such as humor, action, and theming. I found myself having a blast from beginning to end with this short, action-packed title.

Get out there and kick some ass!

Ever dreamed of becoming an intergalactic tycoon and raking in space cash like never before? If so, Zero Sum Future gives you the opportunity to face off against others with the same aspirations. You’ll have to ditch your combat cap for a more diplomatic one and build a corporate empire across planets, keeping an eye...