A wild adventure set to chiptunes. 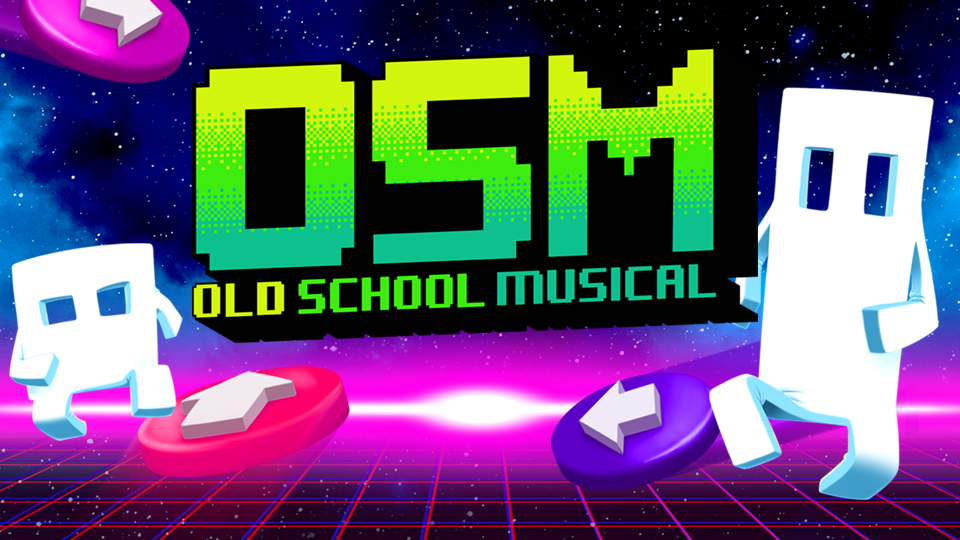 Old School Musical is a rhythm game developed by La Moutarde and published by Playdius and Plug In Digital. It was released September 13th for PC and Nintendo Switch. The self-proclaimed “wacky” game differs from other rhythm games such as Guitar Hero, osu!, and Project Diva. Unlike in traditional rhythm games, the songs in Old School Musical serve as gameplay to accompany a story. Two brothers, Rob and Tib, dream of escaping their island home and traveling to different worlds using a communicator. Their interactions and fights with new characters are controlled by the player’s success in playing the rhythm game. Old School Musical draws inspiration from arcade games and takes Rob, Tib, and the player on a journey back to retro game nostalgia.

The beginning of Old School Musical plays out like a traditional pixel RPG. Cutscenes, text boxes, and top-down views create a narrative introducing the three main characters: Rob, Tib, and their mother Big Mama. The rhythm aspect of the game begins a few minutes into the story, when Rob and Tib train in fighting with Big Mama. Here, the rhythm game is overlaid over the storyboard. Different key inputs scroll along the screen as Rob and Tib fight in the background. The rhythm game takes a form most similar to Dance Dance Revolution — keyboard arrow keys must be pressed to respond to directional arrows that show up on-screen. To add variation, sometimes the arrows will be replaced with a simple column, and only the left and right arrow keys will be used. In this aspect, the mechanics of the rhythm game are straightforward and familiar. Transition scenes between songs will use the pixel RPG format, but gameplay is rhythm-based for the most part.

I happen to be a big fan of rhythm games, so playing Old School Musical was a fresh take on a familiar face. It’s an entertaining pickup for returning rhythm game players. For those unfamiliar with the genre, this game is varied enough where it can be enjoyed for its story rather than for its rhythm gameplay. Players of either camp can enjoy Old School Musical. The default mode is story mode, but two other modes – arcade and multiplayer – are unlocked after the game’s exposition. Three difficulty levels grant forgiveness to non-rhythm game players. Those who get bored with the story can enter arcade mode to play through songs without being interrupted by dialogue. Multiplayer mode lets up to four players play with separate controllers. However, the highlight of Old School Musical is its story. Old School Musical would still be an enjoyable game if it were only a pixel RPG, with no rhythm elements.

The story itself is a compelling enough reason to buy the game. As mentioned before, Rob and Tib are brothers who dream of escaping their island. When they discover a controller their mom Big Mama leaves behind, they are able to create orb portals to different worlds. Rob and Tib’s adventures mainly focus on trying to find their mom, who has given instructions for them to meet her in a communications tower. On the way, they meet random people in each world, who send them on different tasks. Rob and Tib will wander around the area, fight enemies, and exchange brotherly banter in a lighthearted quest. Old School Musical actually throws in some major plot twists, something unexpected in a rhythm-game-turned-pixel-RPG. I’ll avoid heavy spoilers, but if you’re interested in genre deconstruction… Old School Musical’s plot will keep you on your toes.

Old School Musical has a great plot, but technically it’s a rhythm game, and I can’t go without mentioning the songs used for gameplay. Different artists were brought in to collaborate in this game, including Dubmood, Zabutom, Hello World, Yponeko, and Le Plancton. The game boasts 50 tracks spanning 20 levels. Songs have a chiptune feel, adding to the retro aesthetic. Each track matches specific timed movement among characters as well. Battle animation is perfectly synced to each song, which makes the composition of each track even more admirable. On the playing side, each difficulty level manages to correctly capture the feel of the songs no matter how fast or slow one taps along to the rhythm. Easy mode has arrows that tap to the beat, while normal mode will have arrows that tap to the melody. Difficult mode will create a more complex melody to tap to, with a few unique rhythms that accent rather than derive from the songs. The speed of the scrolling arrows increases with difficulty. Admittedly, one fault of Old School Musical is that the arrows can get hard to see in the midst of a vivid moving background. If you’re able to track the arrows, though, there won’t be a huge problem.

The premise of Old School Musical is a callback to retro games within a rhythm game, and it definitely reads as a unique title worth checking out. It toes between both the pixel RPG and rhythm game genres without becoming a watered down version of either, and is a great introduction into one or both genres. Whether a casual gamer or diehard fan, Old School Musical provides fun for just about anyone. If nothing else, Rob and Tib’s brotherly dynamic will have you bursting in laughter.

Story: The plot of Old School Musical is entertaining and surprising.

Graphics: Graphics are wild and vivid, sometimes too so. While detailed and pleasing, they can affect gameplay negatively.

Final Rating: 7.5/10. Old School Musical is a great game for fans of both rhythm games and pixel RPGs.

You don't play a rhythm game and expect a fleshed-out narrative.