Travel through different worlds and cast spells to defeat monsters. 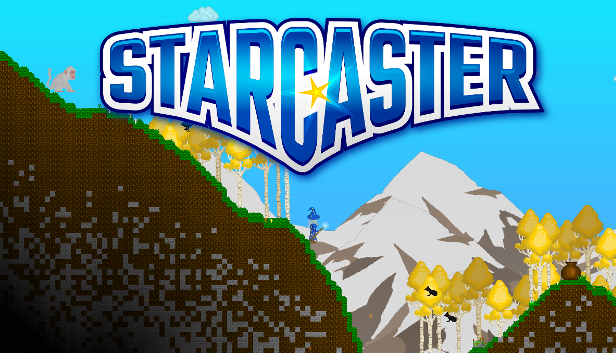 Starcaster is a side-scrolling pixel platformer featuring a wizard who fights enemies in a variety of worlds. The game is available on Steam for $2.99; however, developer and publisher Steam Blade Games has also made Starcaster available on GameJolt, which allows for optional donations ranging from $1-$10. An interesting thing to note is while Steam markets Starcaster as a complete game, GameJolt actually states that Starcaster is in early access. Unaware of its ongoing development, I found the game to be rather unpolished.

Starcaster is a game coded in Java. The actual game file is Starcaster.jar; but Steam’s launch of the game links to and opens a Windows Batch File. This .bat file starts up a java.exe file, which then opens the actual Starcaster.jar program. Closing the java.exe file exits the game, but java.exe can be minimized. Starcaster opens in windowed mode by default, so going into the options menu and switching to fullscreen mode is also another way to hide the Java executable. The only workaround to playing the game without opening java.exe is to go into the source files and directly open Starcaster.jar.

Interestingly enough, Starcaster will not be shown as “currently playing” in the Steam library page, even when launched through Steam. This is not a significant problem, as gameplay time is still logged. The reason this occurs, however, is because Steam only recognizes the previously mentioned .bat file as the game executable, and the .bat file closes immediately on launching java.exe, which is used to run Starcaster.jar… The Steam file path could be cleaner.

Once in Starcaster, gameplay options include singleplayer and multiplayer. Multiplayer gameplay can be local to the computer, LAN-based, or online. I played in singleplayer mode and was greeted with an arcade-esque panoramic, a bit reminiscent of Terraria. Each stage of the ten available worlds is generated randomly, so terrain will be slightly different in each play.

Navigation is primarily left and right as Starcaster uses the WASD key format, swapping out W for [SPACE] to jump. Your character’s base spell is a fireball, which can be fired with a left-mouse click or the hotkey [1]. Additional spells are unlocked with each level up, and these spells can be used through additional hotkeys or cycled through with the mouse scroll wheel. The only other key function in this game is P, which pauses the game and gives the option to save/load. This is not stated anywhere in the game, and in my first playthrough I didn’t know that I could pause the game at all. This made Starcaster very tedious for me. The game does not offer level selection, either, despite having 50 different stages. If you have not saved during your run (like me, as I didn’t know how to save), you will be forced to restart on your next playthrough after death.

Character death occurs either from monster attacks or a wall of fire that approaches on the left to ensure you don’t linger too long in one place. Taking enough damage from the wall of fire will kill you (and trigger an achievement). The wall spawns 45 seconds after the beginning of each level and will kill the player after 30 seconds of continuous damage. The wall moves extremely slowly, so it can be outran and left behind.

Combat in Starcaster is simply point-and-click. Enemies will advance slowly toward you as you continue moving right. Some are realistic, like bees and frogs, while others are fantasy monsters. A time-consuming aspect of this game is that enemies become downed and invulnerable for about two seconds when they are hit. Attacks will pass through them, and in order to kill an enemy, you must wait until it recovers from being hit. This prolonged my gameplay and I found it a bit irritating.

Your score is separate from your EXP in Starcaster. Killing enemies adds the same number of points to your score and EXP. Additional score points can be obtained by collecting coins found within breakable pots and chests in the world, and additional EXP points can be gained upon completion of each stage. Starcaster will keep a record of your highest score and collects additional stats that can be viewed through the main menu. There are 34 in-game achievements to be had, but these achievements do not translate back into Steam. Starcaster also has a store menu where collected coins can be exchanged for character upgrades. Some text in the store menu is cramped though, so I didn’t purchase anything I couldn’t read.

All menus feature the same looping music, and in-game background music loops continuously, only changing on successful completion of a world. The music is inspiring and has an old-school charm to it, but can get boring. Starcaster’s OST is available for purchase for $0.99 on Steam and is composed by code developer Mike Fitzgibbon.

Overall, Starcaster is a simple game whose fun factor varies by player. I’m not a fan of it in its current stage of development, but I see lots of potential as updates roll out (the latest update as of writing is from August 1st, adding 7 more language translations.) Steam Blade Games is an ambitious dev team, and it’s worth following them for more game releases and updates.

Graphics: The pixel art is sharp, but simple.

Sound: Music tracks are fully fleshed out and feature a variety of parts and instruments. The music is retro, but can get repetitive.

Fun Factor: Fun factor varies by player. Your mileage may vary — some may enjoy the clicking combat, but I didn't appreciate it as much.

Final Rating: 5.5/10. Starcaster is a promising first title from new game dev team Steam Blade Games, and holds a lot of potential. For only $2.99, it brings 50 levels whose gameplay can be stretched out for maximum worth. However, the game's early access status means some areas of the game are lacking.

Despite the name "Starcaster", there are only fire, ice, lightning, and earth spells in this game...

Heavily inspired by Stardew Valley and similar role-playing exploration games, Forager is a colorful adventure through the pixelated frontier. As you gather and craft resources, the world of Forager gradually expands and offers new challenges. While there aren’t any defined goals specified in the game, plenty of sandbox-style fun can be had as you explore...