Lead your tribe to a mythical mountain. 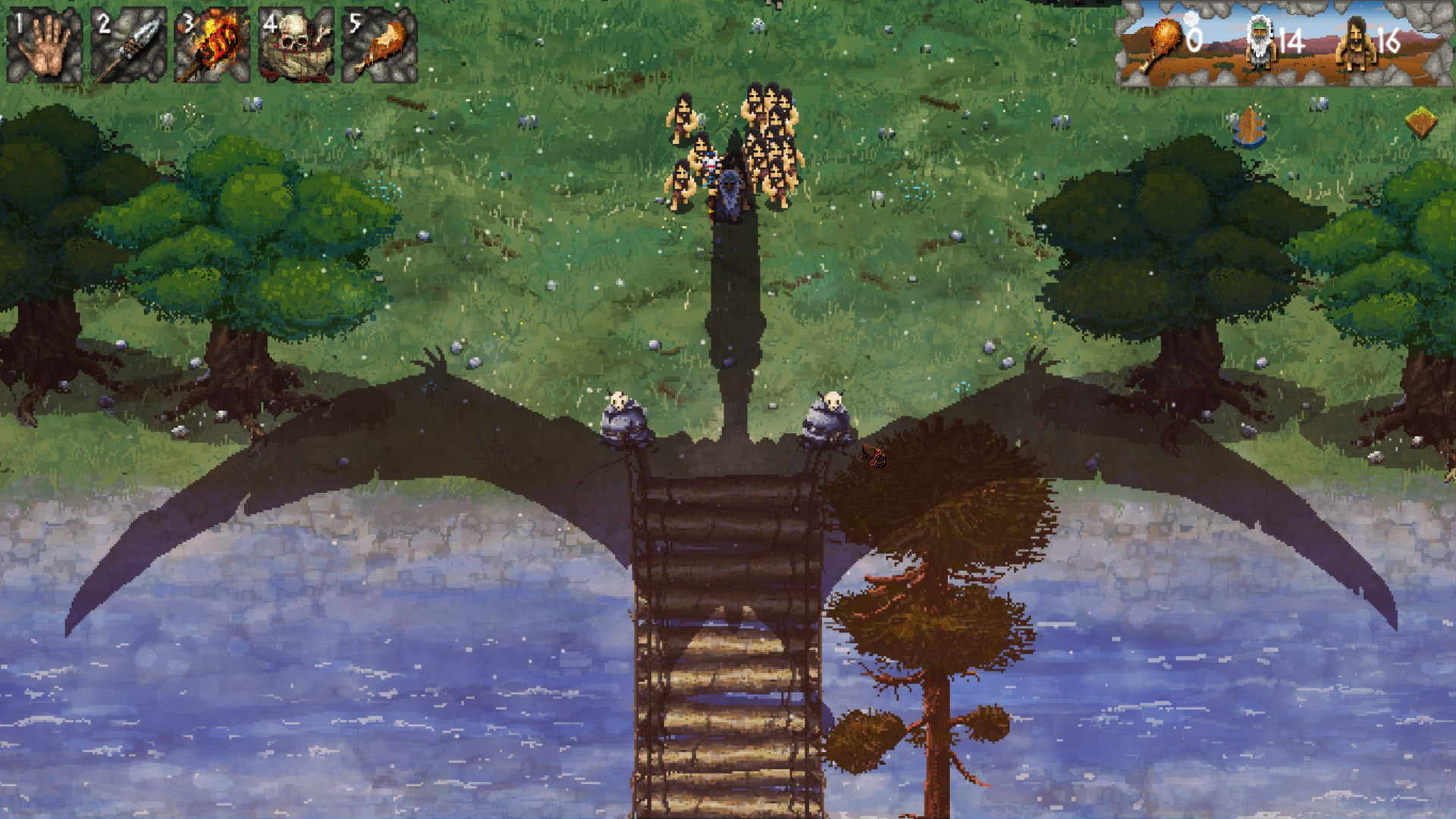 Imagine you’re guiding a group of people from “Point A” to “Point B” with a ton of lethal obstacles in-between, not knowing what lies ahead, all while gradually running out of food. The Oregon Trail immediately comes to mind, a difficult traveling simulator many of us are familiar with. In Tribal Pass you’re put into a similar position and must lead a group of ancient tribesmen and their shaman leader to a mythical mountain. Now, Tribal Pass is not at all realistic, but still invokes the sense of excitement and determination felt on a daring journey. Unfortunately, the game offers little narrative or direct challenge, causing it to quickly become dull and pointless.

Your passage to the mountain is broken down into short, one-minute intervals consisting of arcade-style action with never before seen gameplay mechanics. Novel gameplay is by far the highlight of Tribal Pass. The game plays as a typical auto-runner, where your goal is to evade obstacles and reach the end of the level intact. However, dodging is accomplished by splitting or combining your tribe, rather than the usual shifting from side to side. Splitting multiple times causes each smaller group to be further cut in half, allowing you to take up the entire width of the screen if needed. Although a simple adjustment, Tribal Pass is the first runner game I’ve seen where you split instead of strafe. It forces you to keep track of multiple small groups, rather than a single large one. Also, each level pressures you to split and combine continuously. New strategies emerge as a result, like sacrificing a few men to a rhino, rather than risking the entire population by keeping everyone together. Timing takes a while to master, but is simple enough to understand.

In addition to dodging, a hunger factor adds to the difficulty. Another fundamental goal is to feed your tribe by picking berries or killing wildlife. Switching between the two approaches is done via hotkeys, so you can only choose one at any given time. If you do not have enough food, your tribe will slowly lose men. Two other hotkeys allow you to sacrifice people for food, or vice versa, so managing both meters is not very difficult with the variety of methods provided. The real goal is not to reach the mountain at the end of the road. Rather, you’re supposed to aim for a high score by saving as large of a tribe as possible. Otherwise, it’s extremely easy to guide a small group of five or six men to safety while keeping food supply sufficiently high. Beating the game is elementary, but getting a high score is not.

I believe it is appropriate to praise the game’s pixelated graphics, despite pixel art’s frequency in the current indie gaming scene. Every bit of Tribal Pass is extremely detailed and colorful, causing it to stand out even in a swarm of visually similar titles. Its soundtrack is also fitting, bringing in a tribal atmosphere from start to finish. Tribal Pass described thus far sounds great, but a variety of flaws bog it down. First, the tutorial is effective in teaching you how the game works but fails in identifying its environmental components. Meaning, it takes a long time to figure out the difference between obstacles and aids. After playing the tutorial, you’re immediately thrown into a confusing, fast-paced mess where you’ll think everything needs to be avoided. In reality, only certain animals and bodies of water can kill you, while everything else is there for looks or to help you gain food. A two-page visual guide to everything in the wild would have been extremely helpful. It’s impossible to initially know you can’t kill certain animals, and one would obviously think large trees must be avoided (they don’t). Also, for some reason fire sometimes burns you to death, and other times gives you more men. I have yet to figure out why bonfires are so inconsistent in Tribal Pass, so it’s best to generally avoid them.

More annoying issues arise in Tribal Pass’ setup and interface, and the most obvious flaw is a mass of grammatical errors. They might be intentional to reflect the intended tribal theme, but they’re probably due to a majority of the game’s developers being based in non-English speaking countries. Instructions are still understandable but show a definite lack of polish. You are told for example, “Spears take the running food — some animals afraid of crowd.” I believe this means you can kill animals with spears, but if you have too many tribesmen, animals will run away. The player should not have to interpret anything though; weak wording could be easily fixed. Also, a lot of essential information is given in the form of loading screen hints. Instead, everything should be displayed directly from the start, or at least be accessible from the main menu. One hint states, “You can see useful tips sometimes, but not now.” This statement alone reflects the poor decision making made on Tribal Pass when it comes to providing a clean experience.

It is clear Tribal Pass lacks content. There is nothing to work for other than a high score, which is not enough for a full-fledged title these days. Even though a larger “choose your own path” game mode is present, the basic one-minute runner levels get old fast. Beating the game is way too easy, and it’s really just the same thing over and over. Unique gameplay is simply held back by a variety of design flaws. In the end, Tribal Pass is just another arcade runner that should head over to mobile devices if it wants to be in the right market.

Graphics: Tribal Pass is extremely detailed and colorful, causing it to stand out in a swarm of visually similar titles.

Gameplay: Auto-running is made original with a splitting feature.

Replay Value: The game has little to offer beyond short sessions and high scores.

Fun Factor: Runs are exciting when you're avoiding obstacles and managing your tribe in a fast-paced environment.

Developer Support: Tutorial features should be polished and more straightforward.

Final Rating: 4.5/10. It is clear Tribal Pass lacks content. There is nothing to work for other than a high score, and unique gameplay is simply held back by a variety of design flaws.

Beating the game is way too easy, and it’s really just the same thing over and over.

Shwip is a twin-stick shooter being developed by Jamhammer Games. It is currently in Steam Early Access, with release date TBA. Shwip plays like a homage to Geometry Wars, in that you pilot a fast-moving, fast-shooting spaceship in a bound box, taking out enemies of different shapes and styles. It is heavily neon and has...