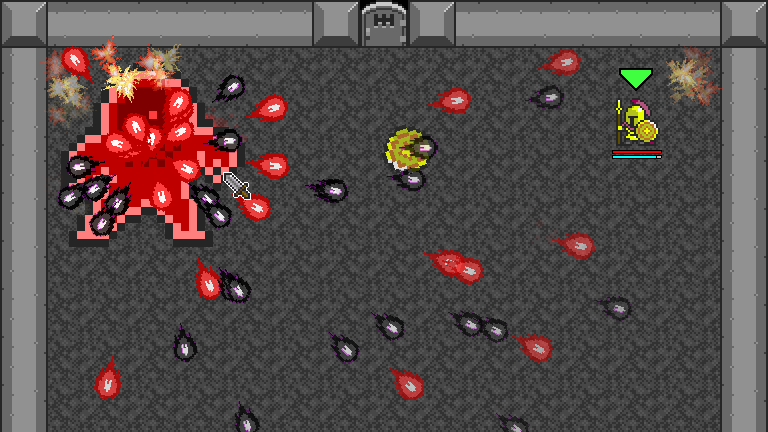 Created by the widely known Black Shell Media’s game development subsidiary, Black Shell Games, Overture is a roguelike RPG with plenty to offer. It is a clean game with a surprising amount of depth and creativity in character selection. Practically every essential roguelike feature is included, from dungeon boss battles to a plethora of loot to be hauled. What makes Overture stand out is its sheer difficulty level at times, where the player must face almost unbeatable odds. This poses the question, is it possible for a game to be too challenging? We will return to this thought later on.

First, let’s take a look at some of Overture’s basic gameplay components. The interface and control scheme are as simple as they come, offering WASD movement and two mouse attacks. One attack is your primary, while the other is a mana-depleting special attack. The object of the game is to advance through several dungeon floors, eventually reaching a final boss at the tenth floor down. Unfortunately, I cannot tell the tale of what lies at the final stage, as I have yet to get past even the fifth. In every floor I have seen, however, two bosses must be defeated in order to advance. The first boss awaits on the open battlefield and can be approached whenever you feel ready. The second is fought in a small room containing nothing between you and the potential giant slime trying to kill you. I found each boss battle of a pair to be equally difficult, although you are actually more likely to be killed by swarms of regular enemies instead. Bosses, and entire maps in general, are randomly generated and selected from a pool of possible themes. Some are definitely a bit harder than others, so this keeps you on your toes on all times.

The core objective of the game is pretty straightforward, but what you’ll encounter along your journey is quite interesting. To start, there is a ton of equipment scattered around which can be quickly obtained with the click of a button. Certain items are much rarer than others and some grant special powers. For example, one weapon has a 5% chance of spawning a skeleton companion every time you land a hit. Another item provides a solid defense buff, but reduces movement speed as a trade-off. I forgot to mention Overture also uses permadeath, instantly building an exhilarating atmosphere because of it. Within each playthrough, you will earn XP every time you kill an enemy or discover loot. Gold coins and XP are mixed together, but the gold stays with you even after you die, while in-game leveling does not. Note that leveling up doesn’t do anything other than align your character’s stats with the gradually increasing strength of the opponents around you.

In terms of character options, Overture offers exactly 24 unique roles to choose from. Initially, they must be unlocked for 2000 coins each, which is definitely reasonable considering you earn a couple thousand per playthrough. Essentially, every time you give the game a shot, you can try out a brand new character if desired. Once every character is unlocked, they can be permanently upgraded indefinitely for a gradually escalating amount of coins. I really love how each one is very unique in playstyle and overall feel. Not only do characters vary statistically, but each also has a distinct special attack that changes your approach. Character balancing done over a series of game updates has finally achieved equilibrium, preventing any one character from being more powerful than the rest.

Speaking of updates, Overture has shown consistent developer support and activity, pushing out many solid changes that demonstrate how the game has improved drastically from its initial release. Bugs and glitches plagued the early builds of Overture, but I found them to be practically non-existent at this point in time. Even the graphics of the game have greatly improved, adding more colors, textures, and depth.

Returning to my question from earlier, Overture raises the question of possibly being too difficult. Since your surroundings in each level are random, it is common to abruptly spawn in the middle of a mini-boss trifecta. Or perhaps a bunch of rocks will prevent you from running from a mob of vicious worms. Maybe, you’ll fail to find a single weapon worth more than a rock. Don’t get me wrong; challenging games are needed, and there’s been a lack of them in recent years. The issue arises in the randomly varying level of difficulty in Overture. See, you may be confidently killing enemies upon enemies for twenty minutes, when suddenly you get blasted by a stray bunch of fireballs absolutely out of nowhere. In my experience, you will usually die against unfair odds unexpectedly. Such a situation is extremely frustrating, and really messes with your head. To close my point, I do not think games can be too difficult as a whole, but changing pace randomly within stages is a problem. Truthfully, this is Overture’s only flaw, although it is indeed fatal.

If you enjoy mob-based RPGs, Overture is right for you. It’s an addicting title with a knack for making you rage. With plenty of characters to choose from and unexpected twists and turns in the heat of battle, there’s always something to look forward to. I recommend giving Overture a try and testing your patience to see if you can make it to the fabled final floor.

Progression: Stat advancing within a crawl is implemented fairly, as well as beyond a single session.

Fun Factor: Sidestepping projectiles, collecting loot, and vanquishing your foes is a ton of fun.

Developer Support: Overture initially was plagued with bugs and balancing issues, but these were successfully straightened out through a series of updates.

Final Rating: 8/10. If you enjoy mob-based RPGs, Overture is right for you. It’s an addicting title with a knack for making you rage. With plenty of characters to choose from and unexpected twists and turns in the heat of battle, there’s always something to look forward to.

Try testing your patience to see if you can make it to the fabled final floor.

Protocol is played in the style of a walking simulator, where instead of exploring a unique environment or experimenting with your surroundings sandbox-style, you essentially play as a slave. Gameplay consists of following a literal protocol and proceeding through a dangerous sci-fi landscape as a lab rat. One wrong move to contradict your A.I. overseer’s...